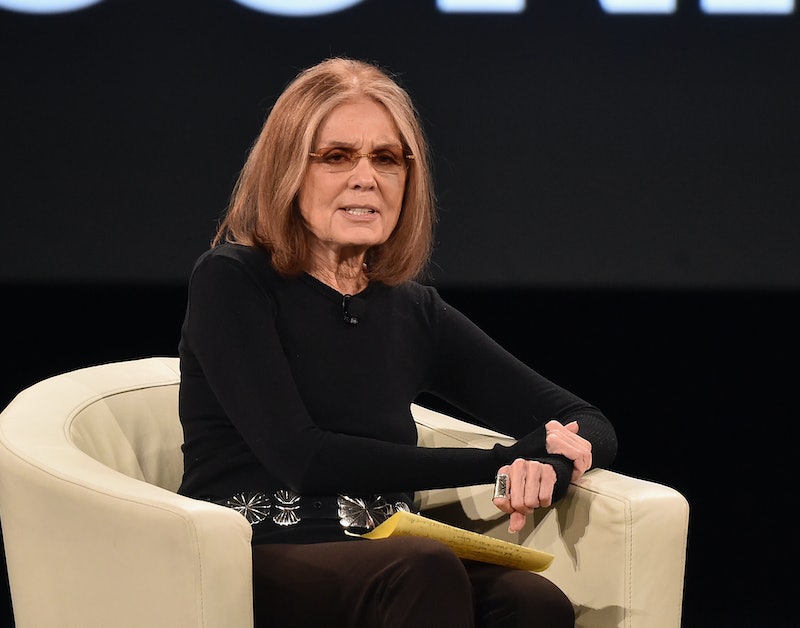 In a Friday interview with Bill Maher, feminist icon Gloria Steinem said that young women support Bernie Sanders because "the boys are with Bernie," and, in doing so, she caused a generation of women's heads to explode. Mom, how could you?

Maher and Steinem were discussing the split in female voters between Hillary Clinton and Sanders. While older Democrat women tend to support Clinton, their younger counterparts are supporting Sanders in droves, in a trend that's surely troubling to a campaign that was banking on their votes. Steinem explained this split by saying "First of all, women get more radical as we get older... Men tend to get more conservative because they gain power as they age, and women get more radical because they lose power as they age ... They're gonna get more activist as they grow older."

Then, in a quote that sounded like it came from Donald Trump, she went on to say, "When you're young you're thinking 'where are the boys? The boys are with Bernie.'"

Gloria, no. Not you.

Let's first dismantle the idea that women's increasing activism as they age explains why older women are voting for Clinton while younger women are all for Sanders. Taking a look at the two candidates, I think we can safely say that the one who is advocating for a single-payer health care plan, free college, sweeping campaign finance reform, and other policies bordering on socialism is more radical than the comparatively centrist candidate who has taken lots of money from Wall Street and is such a part of the Washington establishment that she has lived in the freaking White House. Steinem seems to conflate being radical with voting for a woman rather than voting for the person with the more progressive policies, in which case the 81-year-old Steinem could make an argument for backing Carly Fiorina over Sanders.

But the truly upsetting part of Steinem's interview wasn't that flawed logic — it was the suggestion that young women are only serious about their politics insofar as they allow them access to romantic opportunities, which is about the least feminist and most dismissive thing Steinem could have possibly said about female voters. I firmly believe that female voters are supporting Sanders because he has a very strong record of supporting equal pay and reproductive rights for women, without suffering from Clinton's pitfalls: that she is an establishment candidate, that she may be beholden to corporate interests, and that the email scandal called her trustworthiness into question. Being boy crazy has nothing to do with it.

I say all of this as someone who is fully intending on voting for Clinton over Sanders in the primaries, and who thrills at the idea of Hillary Clinton becoming our next president. I recognize her flaws as a candidate, but I still support her over Sanders because I think her realistic approach will triumph over Sanders' revolutionary one in terms of effectiveness in Washington; because I question Sanders' experience and fluency on foreign policy; and yes, because she is a woman. An "I Side With" poll that helps voters choose their candidate based on their shared views puts me at 97 percent aligned with Sanders and 93 percent with Clinton idealogically, but the fact that Clinton is a woman easily bridges that idealogical gap for me. I think that it's time for a female president, and that having a woman hold the most powerful position in the world will result in untold strides for gender equality, strides that can't be accomplished by a male candidate who votes just as vigorously for women's rights as Clinton does. And voting for a candidate based in part on her gender isn't an irrational way to vote — in fact, scholars argue that voting based on "descriptive representation" can be a good thing for democracy.

But while I stand by my decision to vote for Clinton, I — unlike Steinem and another famous advocate of gender equality, Madeleine Albright — support the prerogative of other young women and self-proclaimed feminists to vote for Bernie. When introducing Clinton at a Saturday campaign rally in New Hampshire, first female Secretary of State Albright also did her part to criticize those women who aren't standing behind the candidate, repeating her famous quote, "There's a special place in hell for women who don't help each other."

Gender may be one of the deciding factors for me when choosing between two idealogically similar candidates, but one of the most important edicts of modern feminism is basically "You do you," which is to say that we need to respect and validate the choices of other women, not diminish them when they don't align with our own. (That said, I will not respect and validate the choices of female politicians whose policies seek to limit other women's right to choice. Sorry, Carly.) My feminism doesn't require that I shame those who would vote for Sanders over Clinton — in fact, it requires that I do the exact opposite. And it certainly does nothing but damage the case for gender equality to suggest that young women are only supporting Bernie so that they can find a husband at the Sanders campaign call center.

Having seen the error in her ways, Steinem apologized for her statements to Maher on her Facebook page on Saturday morning.

Steinem had said earlier in Maher's program that "I find the young women very very activist and they're way way more feminist than we — we were like 12 crazy ladies in the beginning and now it's the majority." I only hope that, being the feminist hero that she is, Steinem recognizes that you don't have to vote for Hillary Clinton to consider yourself an activist and a feminist.