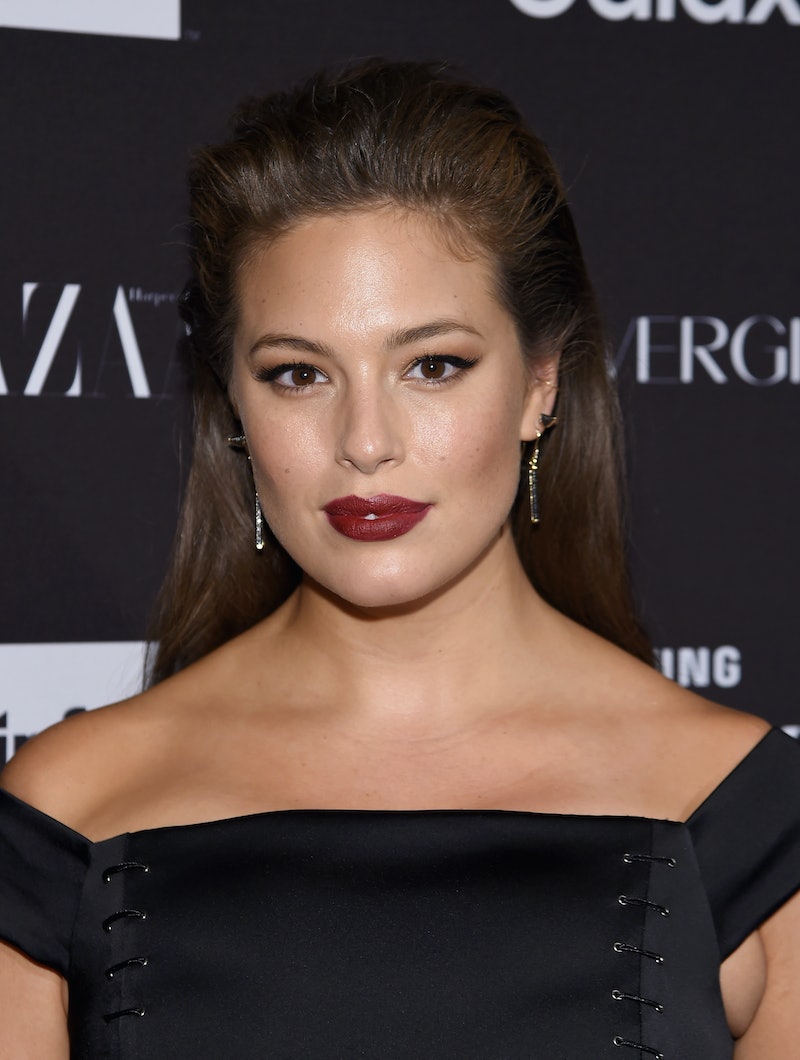 Curvy model Ashley Graham made headlines when it was revealed that she'd be appearing in an editorial for the Sports Illustrated swimsuit edition. But as of Sunday, it's been confirmed that Ashley Graham is on the cover of Sports Illustrated's highly anticipated annual swim issue in one of the three cover spots. This incredibly body positive move is exactly the kind of forward-thinking we need on all types of magazines, not just the women's interest ones. And it's exciting to see Sports Illustrated take on a plus size model for its cover.

Her cover will appear alongside models Ronda Rousey and Hailey Clauson. Sports Illustrated proudly announced its curve model with the headline "Ashley Graham In All Her Glory." Seeing this type of model not only be used, but celebrated, is inarguably going to help change the strict notions of beauty that have only been perpetuated by glossy magazines and mainstream media for decades. I also have to give major props to the publication for not announcing Graham as a specifically plus size model — a term that she has open disdain for.

By being inclusive and diverse without making a big deal about it, Sports Illustrated has set out a standard for how inclusivity should be approached by other magazines. Not as a statement, per se, but as an honest representation of diversity.

Speaking about scoring the cover on her Instagram, Graham said:

Truly speechless!!! This cover is for every woman who felt like she wasn't beautiful enough because of her size. You can do and achieve anything you put your mind to. Thank you so much to the entire @si_swimsuit team! I'm so excited to be a part of your family. I love you all!!! #siswim #beautybeyondsize.

It's great to see Graham recognize the impact that this magazine cover is likely going to have on many women out there. Representation is incredibly important, because if we can find beauty and the world recognizes beauty in someone who looks like us, it's so much easier to see it in ourselves.

This isn't the first time Graham has revolutionized Sports Illustrated either, considering she appeared as one of the magazine's first plus size models in an advertising campaign for swimsuitsforall last year. S4A is a brand that promotes body positivity constantly, and announced Graham as the face of its company at the end of 2015.

Its #CurvesInBikinis campaign clearly gained some headway, because exactly a year later Graham has gone from ad girl to cover girl. That's proof that body positivity and fat acceptance aren't going anywhere in 2016. And hopefully, this is only the beginning of a more inclusive publishing industry.