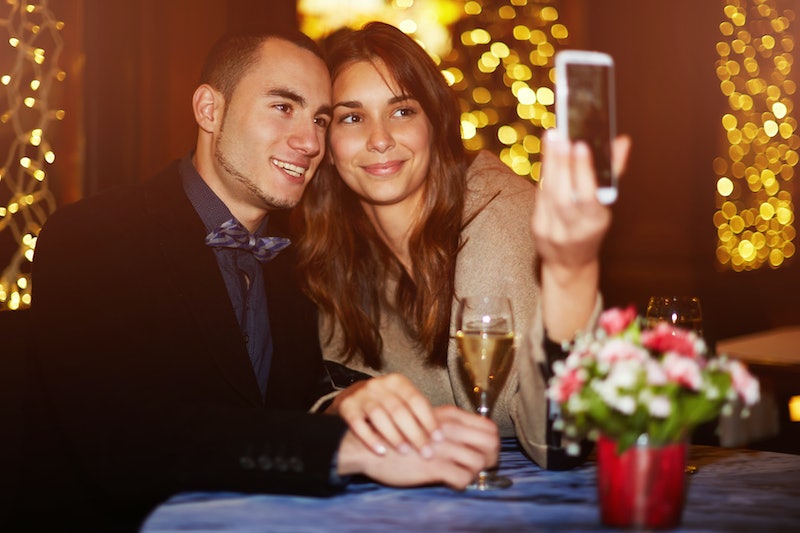 It goes without saying that Valentine's Day is one of the biggest date nights of the year — which means it's also one of the busiest days of the year for restaurants and food delivery services all over the country. Whether you are staying in for a cozy night with your significant other or hitting the town with a group of friends, chances are you're planning on having some kind of special meal tonight. So what are the most popular Valentine's Day foods among the many dining out on this romantic day?

Eater recently analyzed data from Foursquare, Reserve, GrubHub, and Google Trends to figure out what America eats on Valentine's Day and as it turns out, there's a clear trend: Couples are drawn to French, Italian, and Spanish food (essentially everything but American food), while single people tend to stick to classic wings and fries. But the one surprising food that really comes out on top: sushi!

As Eater explains, couples who choose to brave the crowds and go out on Valentine's Day tend to prefer international cuisine. Per Foursquare's data, French, Spanish, and Italian restaurants have some of the largest upswing in foot traffic on Valentine's Day, compared to any other day in 2015, on average. That's probably because, as Foursquare data shows, French foods and other international food items, like paella, are considered some of the most "romantic" dining options available, with intimate, candle-lit atmospheres.

Of course, not every couple chooses to go out. According to restaurant app Reserve, only 25 percent of the country actually goes out to eat on Valentine’s Day — not surprising, given the impossible task of getting a reservation. Those couples who choose to stay in and order delivery tend to go for a different kind of international food — sushi.

GrubHub data shows that sushi orders increase a total of 15 percent on Valentine’s Day, perhaps helped by some restaurants' more festive options. Case in point? The most popular GrubHub item on February 13 is the heart-shaped Valentine sushi roll, which users are four times more likely to order on the holiday than on the same weekday any other week. Meanwhile, the similar "sweetheart roll" has the third-highest spike in orders.

And it's not just on GrubHub that sushi sees an increase in popularity. While Asian-themed restaurants aren't among the most popular Google searches around Valentine's Day, searches specifically for "sushi" do peak every year around the holiday. Looks like sushi has a bigger place in our hearts than we thought!

As for those planning on having some quality alone time this Valentine's Day, their food choices will likely swing in the opposite direction of sushi and other international food. According to GrubHub data, single people ordering delivery are more likely to order wings, waffle fries, egg rolls, and garlic bread than their coupled-up counterparts. Hey, if everyone else is splurging on fancy foods, why can't you satisfy your own delicious cravings, right?

Finally, those going out with a group of friends tend to be drawn to more casual, fun, platonic places, like frozen yogurt and beer gardens.

All of these options honestly sound absolutely delicious, regardless of what your plans are for tonight. So whichever choice you go with, enjoy your meal and happy Valentines Day!