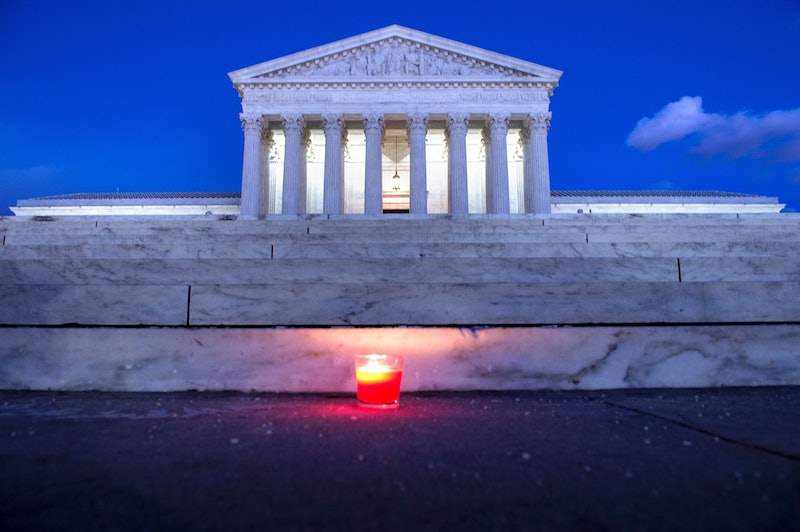 On Saturday, Supreme Court Justice Antonin Scalia passed away unexpectedly while on a trip to Texas. Justice Scalia, who was the longest-serving member on the bench at the time of his death, was appointed by President Ronald Reagan and confirmed unanimously by the U.S. Senate in 1986. Not surprisingly, the conservative justice's death has been highly politicized, particularly in the context of what Scalia's vote on an upcoming birth control case could have meant for President Obama's health care law and women's health issues in general.

Back in November, the Supreme Court agreed to hear yet another case on Obama's health care reform legislation, the Affordable Care Act. This will be the fourth case dealing with the Affordable Care Act to come before the high court in five years. More specifically, it will be the second time in three years that the court will offer some guidance on the law's "contraception mandate," which requires health insurers or employers to allow women access to birth control. In 2014, SCOTUS ruled on Burwell v. Hobby Lobby, saying that certain private companies can refuse to pay for birth control for their employees, thereby shifting that responsibility to insurance companies. Although it was a landmark decision, the Hobby Lobby case did not completely resolve religious groups' issues with the contraception mandate.

The Hobby Lobby decision only applied to privately held companies and it required those companies opposed to providing birth control to write a letter to the government or their insurance provider that they would not pay for contraception. At that point, the insurance company would have to pay for the contraception. This arrangement was also extended to religious non-profit groups after they fought to negotiate following the ruling.

Despite the arrangement following the Hobby Lobby case, religious groups are not satisfied. In a series of cases around the country, these groups have argued that they are still being forced to comply with the contraceptive mandate, even if they're not directly paying for the birth control. Once they've written the required letter, they argue, the government can take over their health insurance plans to make sure that their female employees can still get contraceptives.

The Supreme Court has had an array of cases that deal with this same issue submitted to it for review. Rather than choosing just one to review, the court has accepted all of the cases, instructing lawyers to come up with a way to present the issue that minimizes repetition and the number of filings. The court is expected to begin hearing the consolidated version of cases in late March. At that time, it will consider and decide if the current arrangement, in which religious groups and employers must notify the government of their refusal to fund contraceptives for employees, is the "least restrictive means" of meeting the government's goal of providing access to birth control.

With Scalia's death, the court will have to hear the case with just eight justices on the bench. As a firm conservative, Scalia was part of the majority decision in the Hobby Lobby case, which argued that religious groups did have a right to refuse to pay for contraceptives. Without Scalia, the court remains evenly divided between conservative and liberal justices. In a tie, the court effectively doesn't make a decision, letting the lower court's (in this case, lower courts') ruling stand. It's possible in this case, though, that Justice Anthony Kennedy could side with the liberal justices, as he has done before. If that happens, the court would rule against the religious groups, thereby preserving the right of women to obtain contraceptives through their employers' healthcare plans.

Either way, it's important to remember that Scalia's family, colleagues, and the country will continue to mourn his death. Although a controversial figure at times, Scalia served dutifully on the bench of the highest court in the country for nearly 30 years, making decisions that couldn't have been easy. His life will be remembered and celebrated by many even while a highly politicized debate about pending court cases and who will or will not replace him on the bench ensues.