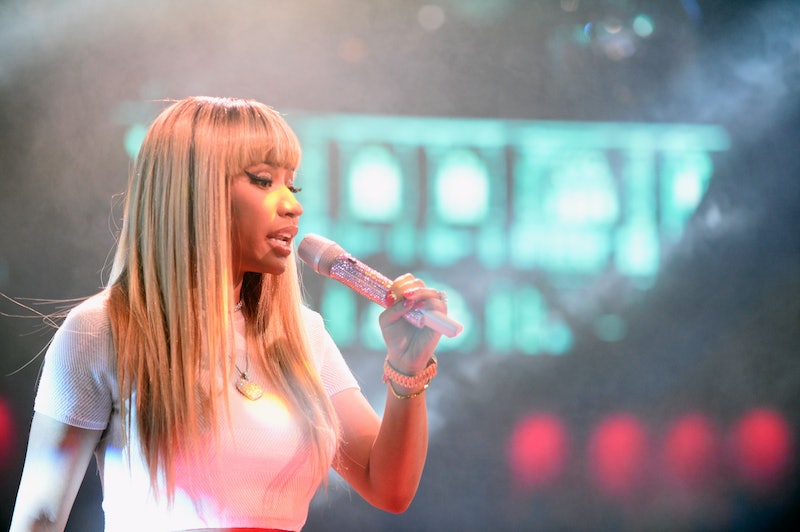 If you are a self-proclaimed Barbie, then the excitement that you felt when you found out that Nicki Minaj was performing at the 2016 Grammys was way too real. If there is one thing that Minaj knows how to do, it's put on a show, despite how much her artistry may be under-appreciated by the world of accolades. Say what you want about Minaj being "too outspoken" about the state of the music industry and the lack of recognition for artists of color, but she can back up everything that she says with a hell of a lot of raw talent and creative joie de vivre. Thus, it probably came as a huge disappointment that Nicki Minaj isn't performing at the 2016 Grammys after all. Despite appearing in the Grammys commercial promoting the night, Minaj took to Instagram in order to clarify that she's not actually hitting the stage come Monday night. Sorry, Barbies.

While Minaj was nominated for Best Rap Performance for her song "Truffle Butter" (Which she lost to Kendrick Lamar for "Alright"), Best Rap/Sung Collaboration for "Only," and Best Rap Album for The Pinkprint, I think we can all agree that she was snubbed in the main categories. To see The Pinkprint reduced to the niche genre categories instead of qualifying for Record of the Year or Album of the Year hurt me deeply as a fan, especially a fan who knows all the words to "Bed of Lies" and "Grand Piano." Now it appears that I'll be hurt even more because I won't be watching the queen hit the stage, since, according to her Instagram message:

I know I'm in the commercial but I actually won't be performing. I want to thank the Grammys for being super sweet & supportive & for recognizing The Pinkprint. Maybe next year will make more sense in terms of timing and I'll create a very special performance for you guys. In the mean time, enjoy the show!

Nicki, why you gotta hurt me like this? Let's just keep our fingers crossed that next year will bring with it an epic performance from the "Truffle Butter" queen, because I think we all deserve that level of epicness.