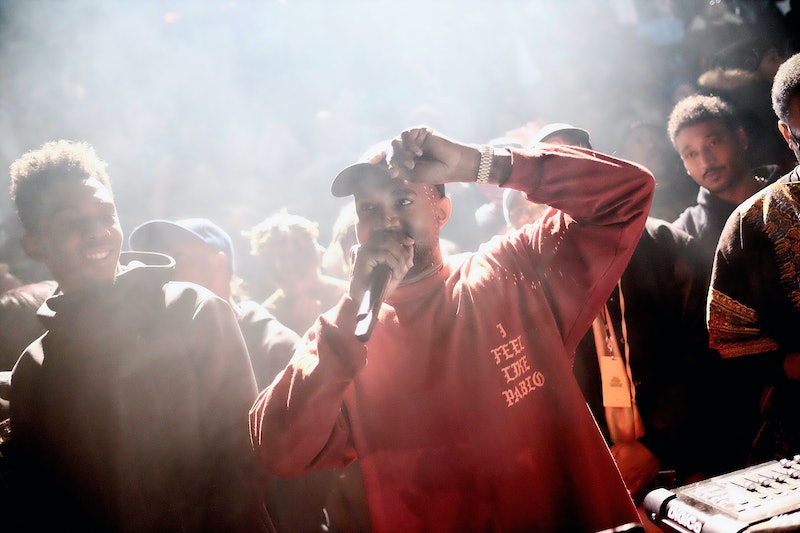 Based on Kanye West's SNL shoutout directing fans to his official site to hear his new album The Life of Pablo, it seemed like www.kanyewest.com would be garnering more traffic Sunday morning than Amazon on Cyber Monday. However, technology intervened, forcing Kim Kardashian to take to her Twitter account to reassure Yeezy fans that while the site had crashed, the album would be back on its way back there soon. (That never happened, and Kardashian-West has since deleted the tweet.) In its place came a link to purchase the album on Tidal, but many began wondering if that was the only place to listen to The Life of Pablo. Was it on Spotify? Pandora? Or could TLOP even be on Soundcloud? Update: On Monday evening, Kanye tweeted that The Life Of Pablo will only be available on Tidal. He wrote: "My album will never never never be on Apple. And it will never be for sale... You can only get it on Tidal."

Earlier: SoundCloud actually does have you covered — for 1/17th of the songs. The social-networking platform, which allows users to comment on individual parts of each posted song, has proven to be a crucial tool for new acts looking to break out. More established artists, however, tend to use the platform on a typically less frequent basis to highlight specific clips and remixes. (And, since users upload songs directly to the platform, your ability to stream the entirety of The Life of Pablo on SoundCloud is entirely up to Team Ye.)

As of this moment, there are seven tracks on West's Soundcloud account, the most recent of which, "30 Hours," was uploaded two days ago. The four-minute song, which was added to the final 17-track T.L.O.P. lineup was confirmed in a picture the rapper tweeted on Friday. It features vocals by André 3000, samples Arthur Russell’s "Answers Me," and takes its title, according to Genius annotations, from the driving time between Chicago to Los Angeles, where West moved in the early 2000s to record The College Dropout. Also according to Genius interpretations, "30 Hours" "finds Kanye reflecting back on a past relationship— likely with Sumeke Rainey— from the point of view of his present relationship with Kim. Kanye and Rainey dated for seven years and broke up in 2004."

Right now, though, West's newest release remains exclusively on Tidal, but those looking for their Kanye fix can at least take solace in knowing that at least one song, "30 Hours," is available elsewhere.