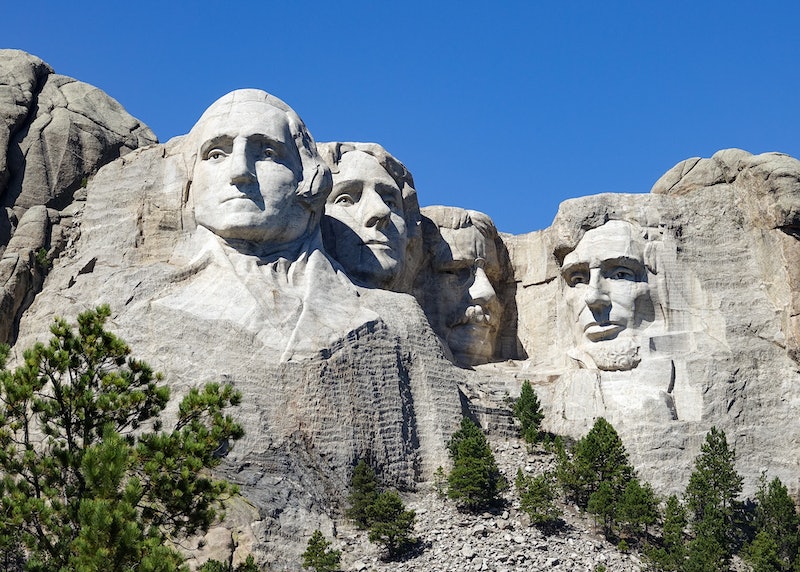 How much do you know about Presidents' Day? Because Presidents' Day is kind of a strange holiday, of which a lot of people only have a vague understanding. Seriously, what is Presidents' Day, even? What exactly are we celebrating? Admittedly, I have spent most of my life thinking it's nothing more than a day in February when we celebrate all the U.S. presidents, and get at least 25 percent off at all major retailers. I know, it's ignorant and greedy, but I'm an American, so that combination is sadly in my DNA.

However, since I've schooled myself on the annual day off — that most of us forget about until the week before — I've learned that my ignorance isn't totally my fault. Because Presidents' Day is a holiday that doesn't make a whole lot of sense, once you break down the origins of it.

For one, Presidents' Day is a celebration of specific presidential birthdays, none of which usually fall on the actual day, since it's celebrated on the third Monday in February. I mean, WTF? It makes no earthly sense. But that's not the only weird thing about this American holiday. Here are some facts about Presidents' Day you should know, because it's more than just a day the banks are closed.

1. It was created to honor George Washington's birthday, but other presidents have stolen his thunder

The holiday was created to honor the first U.S. president, George Washington. According to History.com, Washington's birthday was how the holiday began, following his death in 1799, and was celebrated each year on Feb. 22. It was then celebrated widely in 1832 on the centennial of his birth, and then in 1848 when construction first started on the Washington Monument.

However, with other presidents having birthdays in February (including Abe Lincoln, on Feb. 12), and the passing of the Uniform Monday Holiday Act in 1971 (more on that later), the holiday became recognized as a day to honor multiple past presidents and celebrate patriotism in a general sense. Poor George.

In fact, Alabama celebrates Washington's birthday and Thomas Jefferson's birthday on Presidents' Day, even though Jefferson was born in April.

2. It's a brilliant shopper trap

To major retailers, it doesn't matter which president you're celebrating on Presidents' Day, as long as you're taking advantage of their doorbusters and massive markdowns. There's nothing more American than going into debt with crap you don't need, right?

3. It has different names in certain states

Come on, 'Merica. Can't we get on the same page here?

4. It was changed in the '60s to give more people three-day weekends

Lyndon B. Johnson passed the Uniform Monday Holiday Act in 1968 (later taken into effect by Nixon in 1971), which was a proposed measure to move several federal holidays to certain Mondays. The act would then create a series of three-day weekends for employees, and cut down on work absenteeism. And because the third Monday in February fell between the birthdays of Washington and Lincoln, this shift would create a way to celebrate both birthdays on the same day.

Basically, our most respected leaders are still serving to protect your freedom to chill.

5. It was almost changed back to individual birthdays in the 2000s

Because the origins of Presidents' Day started to become lost in the shuffle, honored more presidents than just Washington, sort of screwed over Lincoln, and morphed into a commercialized cluster of chaos, an attempt to restore Washington's and Lincoln's individual birthdays as holidays was made in the 2000s. Unfortunately, it didn't gain much traction. However, the federal government still recognizes Presidents' Day as a celebration of Washington, and is listed as such on official calendars.

So, send some love out to Washington (because it's his day), to Lincoln (for getting the shaft), and to Congress for giving you a day off from work. Then, head to the mall and spend all that hard earned cash on clothes and home decor. Because... 'Merica.