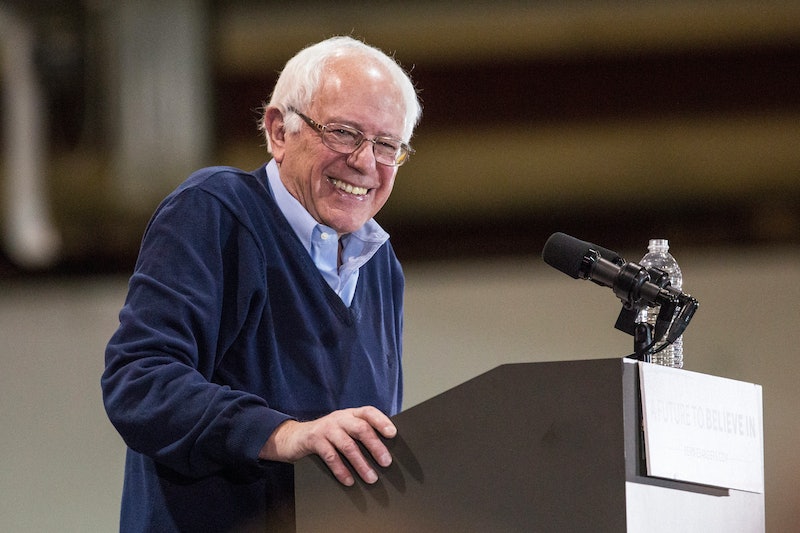 Bernie Sanders is a character, and by a character, I mean he has character. He's a Jew from Brooklyn with messy hair, hands a-twirlin', a funny accent, and a hunched back. Apparently, he owns just two pairs of underwear — well, at least Larry David said so in a rumor he started via Saturday Night Live. So what if Bernie's not the picture of a president — just how should a president look? Possibly like Bernie! In any case, ever since he has appeared on the presidential scene, Internet goers have produced plenty of jokes to accompany Sanders along his potential journey to the White House. In addition to his widespread hashtag, #FeelTheBern, and his apparent lack of undergarments, Sanders is a stand-up guy who is really out to help others.

As far as jokes go, the "Twitterverse" and other areas of the Internet have their proverbial bases covered. Comedians are all set with plenty of ammunition. The jokes are ready to roll out. Some are actually hilarious, others more sentimental about the areas closest to people's hearts, some are flat-out inaccurate, a couple are from Bernie himself, and all of them are entertaining.

Without further ado, I present jokes from the late-night circuit that featuring Sanders in all of his Democratic Socialist glory.

This is the 100th anniversary of the New Hampshire primary. They've been doing this primary in New Hampshire since Bernie Sanders was 5 years old.

Sanders is leading Hillary Clinton in New Hampshire by 27 points. Bernie is very well liked among Democratic voters. Among those likely to vote in the primary, his favorability rating is 91 percent — that is incredibly high. As are many of his supporters.

Bernie Sanders lost the Iowa Caucus by .03 percent. In other words, Bernie would have won if six stoners had managed to get off the couch.

Bernie Sanders says his campaign is trying to appeal now to senior citizens. The problem is, every time Bernie says, "Feel the Bern," the seniors think he's talking about acid reflux.

A new poll shows that Hillary Clinton is only six points ahead of Bernie Sanders. Today a very confident Hillary said, "Oh, please. Like I'm going to lose the Democratic nomination to a left-wing senator nobody's ever heard of?"

Liberal Democrat Bernie Sanders had a rally in Los Angeles last night attended by over 27,000 supporters. The rally set the world record for most Priuses in one parking lot.

Bernie Sanders yesterday interrupted his own speech to rush to the aid of a man who fainted in the audience. Luckily, Bernie was able to shout him back to consciousness: "Are you OK? Wake up, the middle class is disappearing!"

A tattoo shop in Vermont is currently offering a free tattoo of the outline of Bernie Sanders' head. Or as they're calling it, a "gramp stamp."

According to a new report, the number of babies named "Hillary" has decreased 90 percent since Bill Clinton was president. And, this is interesting, there has never been a baby named Bernie.

Bernie Sanders has now passed Hillary Clinton in the New Hampshire polls. It's the first time anyone's ever been passed by a guy in a Prius.

Bernie Sanders drew over 20,000 people to his campaign event in Portland this weekend. Sounds impressive, but remember, it's Portland. You can draw a crowd of 20,000 people with a Frisbee.

Meanwhile Bernie Sanders announced that he loves selfies. He just hasn't figured out how to take them on his rotary phone.

On Monday, Hillary Clinton narrowly won in Iowa, with the final results showing that she beat Bernie Sanders by less than 1 percent. And you thought Bernie was mad at the 1 percent before.

Ben & Jerry's Ice Cream wants to make a flavor inspired by Bernie Sanders. Whatever flavor it winds up being, we know Bernie will hate it for being too rich.

There are reports that Hillary Clinton's campaign is saving money by encouraging staffers to take discounted buses between New York and Washington. Not to be outdone, Bernie Sanders is actually Fed-Exing himself to every speech.

This week presidential candidate Bernie Sanders introduced a new bill that would make four-year college tuition free. Which was great news, unless you were the student who was just walking out of your graduation.

Vermont Senator Bernie Sanders is expected to announce tomorrow that he is running for president, making him Hillary Clinton's only Democratic challenger so far. Or as Hillary put it, "Ooh, appetizers!"

Bernie Sanders' presidential campaign announced that it raised over $1.5 million in the 24 hours after he announced his bid. Meanwhile, a 12-year-old on Kickstarter just raised $7 million in five minutes after announcing his idea for juice box water guns.

A turning point in Sanders' life came as a teenager, when he was bitten by a radioactive senior citizen, giving him the power to be as grumpy as 10 old men. ... You think this is a joke, but Bernie Sanders released an actual folk album in 1987 titled We Shall Overcome. ... Even if he does become president, I hope he doesn't give up singing. We need more Bernie Sanders covering songs. Could you just imagine him: "Hello? From the other side? Hello? Can you hear me, from the other side? Where are the buttons on this thing?"

Bernie Sanders may not tell jokes on purpose, but it's tough to deny his inherent hilarity. It's one reason why America, whether supporting him for president or not, simply can't get enough of him. As he said in Iowa, "I'm not here to tell you some good jokes. I have a bad sense of humor. It wouldn't work in any case."