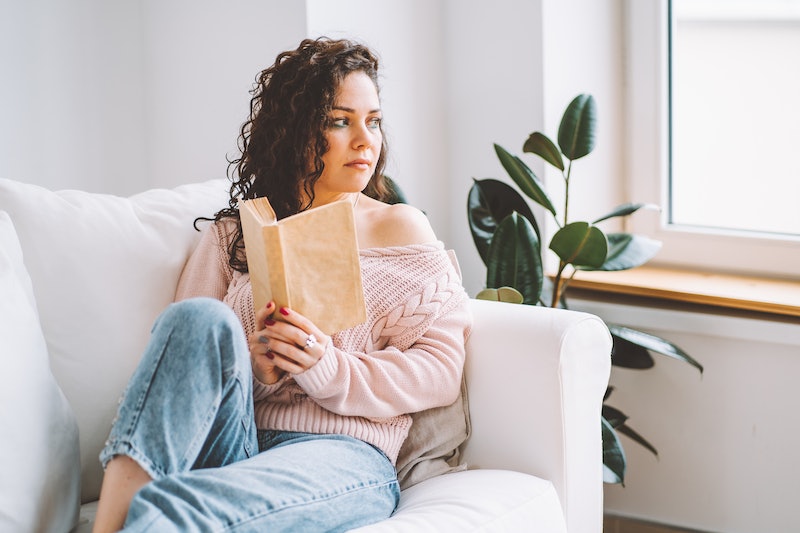 When I was first diagnosed with anorexia, I was a bookish 12-year-old who found comfort through reading — books had always served as my escape when chaos and anxiety surrounded me. As my illness intensified, I also began to use reading as a way to distract myself from the gnawing physical hunger that I was fighting to ignore. I distinctly remember Googling how many calories per hour it would burn to sit and read. But, I never thought to read books or memoirs about eating disorders until after my first hospitalization in eighth grade. A friend from treatment recommended that I read Wasted by Marya Hornbacher, which is arguably the most controversial eating disorder memoir to date — it's also one of the first of its kind and Hornbacher penned it at the young age of 23.

Wasted immediately struck a chord with me — when I first entered treatment, my biggest problem was that I couldn't find the words to express how and why my anorexia had developed and intensified. As an avid writer, I tried to put my experiences into writing to share with therapists — but I couldn't even express myself through journaling, because there was still so much I didn't understand. In Wasted, there were so many beautifully written passages that I felt summed up my experience as an anorexic. Hornbacher had put into words what I couldn't and I manically highlighted passages all over my paperback copy.

After two hospitalizations in middle school and high school, I enjoyed several years relatively free from the disorder. Calories and weight were never far from my thoughts, but I forced myself to focus on recovery so I could stay out of the hospital and pursue my academic and artistic endeavors. But, like many people, I eventually relapsed. During my senior year of high school, family problems combined with my perfectionistic stress about college applications resulted in a slow descent back into anorexia. I entered my freshman year of college at my dream school full of hope that a new start would be the solution — but by winter semester, I was in a worse place than ever. Physically and mentally drained, I pushed away friends who tried to help and lied through my teeth when the professors at my small liberal arts college expressed concern.

For the first time in years, I turned to Wasted again — but this time, I drew inspiration from Hornbacher's words about how crucial it is to "let go" of the illness. Her no-nonsense words about eating disorders served as a wake-up call to me. Hornbacher pulls no punches when she describes the disorder as “at the most basic level, a bundle of contradictions: a desire for power that strips you of all power. A gesture of strength that divests you of all strength.” And, despite the fact that the book ends on a less-than-positive note, she points out: "Never, never underestimate the power of desire. If you want to live badly enough, you can live." As I stared at the quotes over and over again in my now-dogeared copy, I called my mom during finals week and uttered the words that I never imagined myself saying: "I need help. I need to go back to the hospital."

Now would be a good time to point out that I'm well aware of all the criticism Wasted has received within the eating disorder community. New York Magazine raised questions whether or not it's a "how-to" manual for at risk individuals who will take careful note of all the numbers (both calories and weight) listed in its pages. I've heard this criticism echoed countless times and I think it's completely unfair. I firmly believe that books about eating disorders, whether they are memoir or fiction, shouldn't be censored, sugar-coated, or criticized for simply depicting what it's like to be in the mind of an eating disorder patient. To do so would be to gloss over the ugly reality of what it's like to be in the throes of an eating disorder.

As a recovered woman who recently re-read Wasted, I have to think that anyone who reads this book and envies the illness is already sick. Hornbacher describes in graphic detail the physical toll of vomiting up blood and overdosing on ipecac, laxatives, and diuretics. It's not a pretty illness, and to assign blame to an eating disorder memoir is as simplistic as blaming fashion magazines and TV shows for an illness that we know is caused by a complex combination of genetic and environmental factors.

Furthermore, these books can help friends and family members understand us and spot warning signs that they may have otherwise missed. Even in fiction books, like Laurie Halse Anderson's amazing Wintergirls, numbers are a constant, whether they're in the form of calories or weight. Of course this can be triggering to someone in recovery — but it's also essential that they be included in a book about eating disorders, whether it's fiction or a memoir. People with eating disorders obsess over the numbers because doing so distracts us from the painful realities we're trying to escape — so to ignore the fact that we become consumed by numbers would gloss over a huge part of what daily life is like for a person with anorexia or bulimia.

I credit Wasted for inspiring me to seek help, and I applaud Wintergirls for its incredibly raw, realistic depiction of what it's like to be a teen with an eating disorder. I believe these books, and others like them, are extremely important and should not be censored. But, I recognize that numbers and graphic descriptions of eating disordered behaviors can be triggering during recovery — so a critical part of my recovery was taking a break from books about eating disorders. For me, it wasn't simply that reading the numbers was triggering — it was that compulsively reading about eating disorders nonstop took time out of my day that was better spent reclaiming my life and my identity that was entirely separate from the eating disorder.

Being in intensive eating disorder treatment is incredibly time-consuming, exhausting, and mentally taxing. It requires that we focus many hours per day on the illness, what caused it, and how we can overcome it. When I did have free time, I found that it was best to focus on finding "myself" again. This process is different for everyone, but it's so important to reclaim our identities during recovery and recognize that our eating disorders do not define us. For me, this involved reading and writing about topics other than my anorexia and finding new passions, like art, to focus on.

Furthermore, part of recovery is empowering ourselves and taking responsibility for our health. When we're completely honest with the medical professionals who are treating us, our therapists can help us pinpoint triggers and behaviors that are damaging to our recovery — and most of them will tell us to stay away from eating disorder-themed books during treatment. When we're armed with that knowledge, it's up to us to take responsibility and stay away from potentially triggering books and behaviors. And, Hornbacher herself has changed elements of Wasted's message. In 2014, she added a new afterward to the book that stated recovery is both possible and and necessary. Hornbacher told New York Magazine that she's "absolutely" recovered all these years later and she wanted to send a new message to her readers:

I felt like I needed to change the story. At that time, and still to some extent today, the running line in therapeutic circles was the patronizing notion that you’ll always struggle with your illness. To me, that’s like consigning someone to hell. I don’t buy it. I know so many women and men who’ve recovered. They’ve worked their asses off.

She also stated that, "it was heartbreaking to hear that people have used Wasted as some sort of a guide. I was stunned. It makes me tear up just thinking about it." I can certainly understand why this is deeply upsetting to her, but it's so important to remember that it takes far, far more than a memoir to cause or fuel an eating disorder. Furthermore, if people are seeking a "guide" to anorexia, they don't need to bother venturing to the bookstore — it's a sad reality that the Internet is full of pro-anorexia websites that contain images of emaciated bodies, tips about how to most effectively starve oneself, and an overarching message that eating disorders are a lifestyle rather than an illness. It's unfair to use Wasted as a scapegoat when, overall, it sends a powerful message about the dangers of eating disorders.

I absolutely reached a point in my recovery when it was time to stop compulsively re-reading Wasted — but I may not have sought treatment at all if it hadn't been for Hornbacher's book. The recovery process is long, meandering, and different for everyone — a book that inspires us at a certain point in the process may ultimately be one we need to leave behind as we move forward with our treatment. And, since treatment helps us develop self-awareness, we'll be able to recognize when it's time to put away our dog-eared copies of eating disorder memoirs.

More like this
Zosia Mamet Opens Up About Her Eating Disorder
By Zosia Mamet
Here's How To Practice Self-Love In Small Ways Every Day
By Mackenzie Sylvester
The 20 Best Audiobooks To Fall Asleep To
By Aoife Hanna and K.W. Colyard
Conversations With Friends' Endometriosis Scenes Are As Brutal As It Gets
By Ivana Rihter
Get Even More From Bustle — Sign Up For The Newsletter