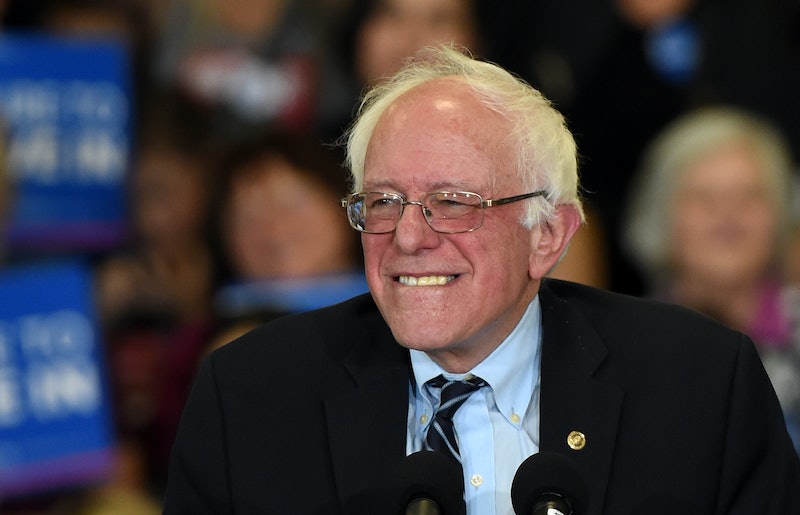 If you've glanced at a newspaper, TV, or social media in the past year, you probably know Bernie Sanders' name. He shocked the nation by becoming the first Jew to win a presidential primary for a major party, upsetting Hillary Clinton's previously clear path to the Democratic nomination as a more liberal democratic socialist. Apparently politics runs in the family, as Sanders' older brother is also politically active. Who is Sanders' brother — Larry — you ask?

Larry, 80, is a retired social worker and academic. While his brother's been busy taking on American politics, he has lived across the pond since the '60s. In May, Larry ran for the United Kingdom's Parliament as a Green Party candidate, and came in fifth for the seat of Oxford West and Abingdon. This wasn't Larry's first campaign for office — he ran for the Oxfordshire County Council multiple times and was eventually elected in 2005, according to BBC News.

Because the Green Party isn't very popular in the U.K., he struggled to gain popular support, similarly to Bernie's left-wing political ideologies alienating some U.S. voters. "Although we didn't have a shot at winning, there was an intrinsic value in the Green Party standing, and it's the same for Bernard," Larry told BBC News' Esther Webber in August, adorably calling his baby brother by his full name.

Bernie's older brother spent his entire career helping others, though not always through politics. According to his profile on the Oxfordshire Green Party's website, he once worked as a social worker for children and people with mental health problems. In the academic realm, he lectured on social work and health and social care law and served as the director of the Community Work Practice Learning Centre for Oxford University. He also worked for Oxfordshire Carers Forum, looking out for local caretakers, and as a legal adviser for Oxfordshire Community Care Rights.

Larry and Bernie, six years apart in age, grew up together in Brooklyn, noticeable by their lingering accents. Larry told Rolling Stone's Lauren Kelley in November that their background as Jews in working-class Brooklyn in the aftermath of the Holocaust led them both to left-wing political beliefs. Both Sanders brothers are deeply concerned about equality and justice on all fronts. "The past 30 years have seen growing inequality in the U.K. and the U.S., and a failure by Labour here and by many Democrats there to address it," Larry told Webber. "People feel excluded and there's a lot of anger, which Bernard is tapping into."

Larry is definitely feeling the Bern, and told Rolling Stone's Kelley, "I think that they would be very foolish to underestimate a Bernie Sanders candidacy," in regard to Republicans focusing solely on Hillary Clinton as their opponent for president. Still a U.S. citizen, Larry plans to vote for his brother in November.

More like this
President Zelensky Spoke Out On Ukraine's Chances Of Hosting Eurovision Next Year
By Sam Ramsden
Michigan’s Governor Is “Going To Fight Like Hell” To Protect Abortion Access
By Andrea Zelinski
LGBT+ Men Fleeing Afghanistan Were Denied Asylum By The Home Office, New Findings Show
By Sam Ramsden
How To Fight For Reproductive Rights, Based On How Much Time You Have
By Courtney Young
Get Even More From Bustle — Sign Up For The Newsletter