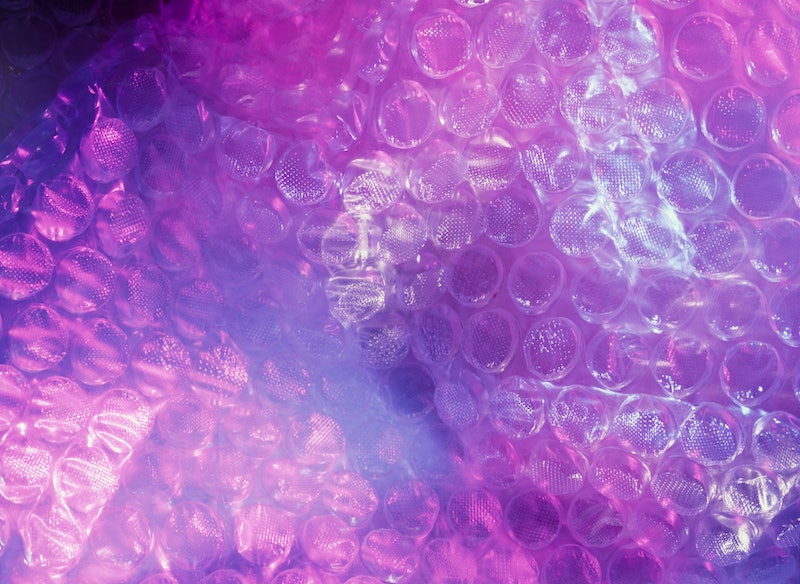 If you've discovered something unusual in your bikini area, don't panic. A pimple, wart, or lump on or around your genitals doesn't automatically mean you have a serious health issue. Lumps and bumps can be caused by lots of different things, many of them completely benign. "Bumps on the genitalia can mean many things, ranging from something as simple as a pimple or ingrown hair, all the way to cancer, and everything in between," Dr. Jamie Lipeles, D.O., an OB-GYN, tells Bustle.

If you aren't in the regular habit of checking out your vulva for health reasons, this is a good time to start. Knowing what the everyday status of your vagina and vulva is, including color, sensitive bits, and other parts unique to you, will make it easier to track if anything appears anomalous later on. A little knowledge is powerful. If you notice something you've never seen before and can't identify what it is, it's often a good idea to get it checked out by a doctor or OB-GYN, in case it needs treatment.

So go forth and have your lumps poked by doctors. But before you panic about any of them, here's a primer on what those bumps might be.

"If someone sees or feels a bump on the genitals, they should always consider that it can be caused by a sexually transmitted infection (STI)," Dr. Lipeles says. "The most common STI that cause bumps on the genitals is condyloma, or genital warts, caused by human papilloma virus (HPV)."

Genital warts are small, skin-colored bumps, sometimes with a cauliflower-like surface. They're caused by types 6 and 11 of the human papilloma virus (HPV), against which you can now be vaccinated. They're generally spread via sexual contact, are contagious, and are the most common STI in the world. They can appear on either the vagina or the vulva, plus other areas around the genitals or upper thighs,.

"Although the type of HPV that cause external bumps only very rarely causes cancer, it is in the best interest of the people to have these bumps treated and or removed, as they can progress to very large masses," Dr. Lipeles says. You can get rid of warts using creams or other more abrasive methods, under the instruction of your gynecologist or primary care physician. A study published in Sexually Transmitted Diseases in 2017 also found that both two-dose and three-dose HPV vaccines can help protect against genital warts, so it's worth making sure your vaccines are up to date.

"Another common type of bump in the genital area is vaginal or vulvar pimples or blockage of sebaceous glands," Dr. Lipeles says. "These pimples, like pimples on other parts of the body, result in uncomfortable raised bumps that usually show a white head." Sometimes, though, they can feel like a hard bump under the skin.

Genital pimples may actually be related to the onset of your period, and tend to be caused by infected hair follicles due to bacterial growth around your vagina. They aren't caused by an STI, and shouldn't be treated with the same scrubs or washes you use on the pimples on your face. A warm bath and good hygiene when touching them (and no picking) will help them heal. (Not shaving or waxing will also minimize your risk of getting them in the first place.)

Cysts are small yellow bumps or globules that feel vaguely solid. There are a few different cyst types that can show up around your genitals. "Bumps can be skin cysts, such as epidermal inclusion cysts or fatty tissue tumors called lipomas," Dr. Felice Gersh, M.D., an OB-GYN, tells Bustle.

Sebaceous cysts anywhere are harmless build-ups of fluid caused when an oil gland is blocked, while Bartholin's gland cysts form on the labia, and Skene duct cysts appear around the urethra. Cysts don't usually present a problem unless they get infected. You and your medical provider can figure out the best option to handle this genital bump.

Genital herpes (herpes simplex type 2) is a sexually transmitted infection that affects one in six Americans, according to Planned Parenthood. It can cause herpes lesions, which are red, painful, and possibly itchy sores on the genitals, Dr. Gersh says. (Herpes simplex type 1 is oral herpes, which causes cold sores around the mouth.)

If you get bumps that have a sensation of itching, then of burning, it's likely a herpes simplex infection, Dr. Lipeles says. "Herpes simplex is self-limited and goes away in about seven to 10 days," he says. The sores may flare up again after they heal, so see a doctor or gynecologist to help you with managing symptoms using topical creams and oral medication.

"Often, herpes simplex infections go undiagnosed because the patient will have this sensation, assume it’s a yeast infection and treat it with over the counter yeast infection medication," Dr. Lipeles says. "Seven days later, the symptoms are gone, and they assume it was related." If you're having persistent sores or itchiness and can't seem to sort it out, a herpes simplex test may help. While you have active sores, it's important to abstain from intercourse or use a barrier method like a condom, to avoid infecting your partner.

"The most common types of bumps on genitalia is folliculitis – most commonly caused by razor burn," Dr. Lipeles says. "This is where the follicle of the hair gets bacteria in it, causing irritation and inflammation." You may also have an ingrown hair, which looks similar: like red, inflamed pimples.

Generally ingrown hairs and folliculitis occur in people who shave their pelvic area. If this does occur, medical advice recommends that you don't shave again for a while, watch the hairs for signs of infection, and be careful of the potential irritants caused by your shaving methods and materials.

Dermatitis sores are sores or scratches accompanied by itching and discomfort. They're quite rare: dermatitis is much more likely to cause a rash than result in any sores, which would probably come about from aggressive itching, according to the Alberta Heath Services. Dermatitis of the genitals can result from skin irritants of many different kinds, from shower gels and hygiene products to particular types of underwear. Treating it will likely involve topical creams, an oral antihistamine, and/or recommendations about changing certain aspects of your routine to narrow down the irritant.

Molluscum contagiosum is a contagious skin condition, often spread by sex (but not always). It causes small, waxy lumps, often with an indentation in the top. "Molluscum contagiosum looks similar to genital warts in many cases," Dr. Lipeles says. "It's caused by a viral infection."

They're not harmful, though they tend to pop up more in people whose immune systems are compromised. Some people choose not to do anything about them, but you can have them removed by a specialist or by prescription medication, which may be a good option if your particular symptoms include itchiness around the lumps. "If left untreated, molluscum contagiosum can last for six months to four years," Dr. Lipeles says — a good motivation to have them treated.

Angiomas are small clusters of red and/or purple blood vessels in a lump, looking a bit like a cherry, according to the U.S. National Library of Medicine. They're small skin growths with broken blood vessels that can look highly alarming on first glance. However, they're entirely benign. They don't usually occur on the vulva or vagina, but it's not a bad sign if they do, and it's entirely your choice to have them removed, which is done via freezing, excision, or shaving off.

Vulval cancer can show up as a lump, open sore, or bleeding mole, possibly accompanied by persistent itching, dark and raised patches of skin, bleeding discharge, and pain or tenderness.

You should know that vulval cancer is exceptionally rare. "It's very uncommon that genital bumps can be early signs of pre-cancer or cancer," Dr. Lipeles says. In the UK, doctors only see new cases on average once every seven years, roughly 3.7 out of every 100,000 women. It's far more likely that a lump is due to other causes, so your first step shouldn't be to leap to worst-case scenarios.

Vulval cancer is often treated using surgery, plus radiotherapy and chemotherapy, and it is serious, so if you have doubts, talk to your doctor as soon as you can.

"Bumps need to be evaluated," Dr. Gersh says. If you're uncomfortable going to your usual GP, find a specialist, like a Planned Parenthood or center for sexual health at a local hospital, and ask them for help (or, honestly, find a new GP you are comfortable talking about your vulva with). Prepare appropriately for the appointment: know as much as you can about when the lump appeared, whether it's grown, where on your cycle you are, and what other symptoms have accompanied it. It's likely it will be something with a quick fix, but it's always worth knowing more.

More like this
How Ovulation Affects Your Sense Of Smell, Libido, & More
By JR Thorpe and Lexi Inks
The Case For Following A Menstrual Cycle Workout Plan
By Emma McGowan and Carolyn Steber
An Expert Weighs In On The Viral Raw Carrot Salad Trend
By Alexis Morillo
6 Asian Beauty Rituals That Will Soothe Your Skin, Scalp & Mind
By Jennifer Li
Get Even More From Bustle — Sign Up For The Newsletter
From hair trends to relationship advice, our daily newsletter has everything you need to sound like a person who’s on TikTok, even if you aren’t.