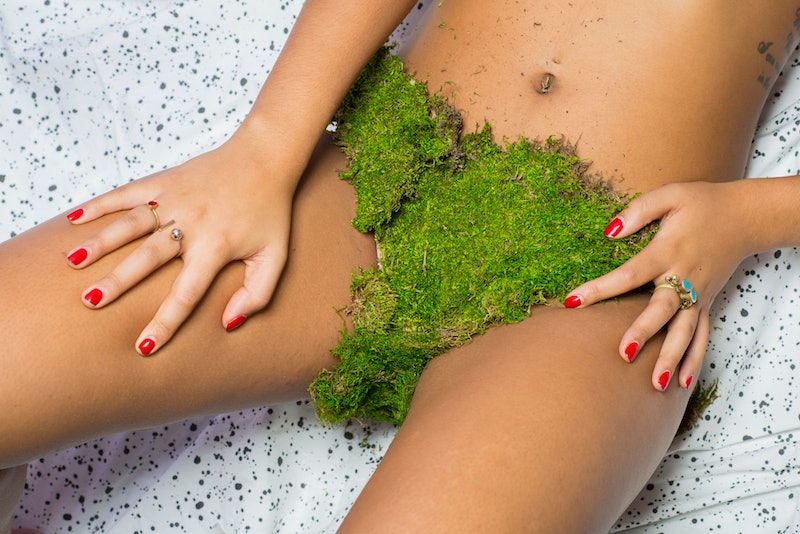 My first memory of pubic hair is being at the beach with my aunt as a kid and seeing little dark hairs poking out from her bikini line. I didn't know what they were; I just knew that I had never seen them before. I don't remember being embarrassed — only keenly aware that I'd viewed something ... adult. Sexy, even.

But as I grew up, society taught me otherwise. As a late bloomer, I was just happy to finally grow pubic hair in the first place. But I didn't want to be the weird one who kept hers intact. So I shaved my bikini line, and when I got to college, I often waxed. As a freshman, I once got a sadistic "full-body wax" before my long-distance boyfriend came to visit me, thinking it would make me sexier. It was the most painful hour of my life, but by the end, I was like a red-skinned, hairless cat — the hair on my arms, legs, face, nipples, neck, and even those little blonde hairs on the small of my back, were gone. My vulva, of course, was also bald. In the end, my boyfriend seemed more befuddled than turned on by my new appearance — and I felt raw as hell, and kind of stupid.

It wasn't until I got into my mid-20s that I started internalizing the fact that I didn't actually have to shave anything. Once I'd had more than a few boyfriends, I realized that I didn't need to undergo any form of expensive or itchy torture just to be considered attractive. In fact, the type of guy I liked — feminist, sexually open, not porn-obsessed — seemed to dig my bush.

While I still sometimes shave my bikini line when I'm in a swimsuit, my default is now decidedly full bush. And I'm not going back. Here's why.

1. Evolution Gave You Pubes For A Reason

It's important to know why pubic hair is there the first place. Vaginas are made of mucous membrane, a type of skin that is more delicate than that on the rest of your body. Your pubes are there to cushion and protect your vagina from everything the world throws at it — dicks, other vaginas, sex toys, bacteria, viruses, you name it. Pubic hair helps ensure that your vaginal folds don’t stick together, which can result in rash and infection. It also protects your vagina from friction during sexual activity. As if that all weren't enough, the hair also acts as a natural barrier, preventing potentially harmful bacteria from entering your pussy.

As Bustle's sexual health columnist Emma Kaywin put it, "The hair covering your vaginal region is there to cushion these tender parts from the rough and tumble of the outside world. Think of it as a homegrown moat working to protect your special castle."

2. You'll Be Less Likely To Contract An STD

Keeping you pubic hair gives you additional protection from STDs spread through skin-to-skin contact. Every time you shave and wax, you create microscopic tears in your skin, which viruses can enter (and they're there, even if you can't see them). Opting out of hair removal prevents these tears from developing. As Kaywin explains, if you don't remove your pubic hair, you're less likely to contract "genital herpes, human papillomavirus (HPV), HIV (which isn’t transmitted skin-to-skin, but can be transmitted through microscopic skin tears), and molluscum contagiosum, a skin virus thought to be increasingly prevalent specifically because of the bikini waxing trend."

I can testify to this. My ex had molluscum contagiosum at one point, and though we were having unprotected sex before we found out he had it, I never caught it. This may have been because I'd gotten the HPV vaccine, but it likely also helped that I had a full bush, without any microscopic tears in my skin for the virus to enter through.

In addition to STDs, you're also more likely to contract cellulitis and staph infections when you remove your pubes. Those tiny tears from waxing and shaving are always there, whether you even see them or not, and the hair removal process itself can lead to infections.

4. You Won't Have To Deal With Razor Burn

It wasn't until I stopped shaving that I realized I actually looked and felt a lot better with hair. Sure, I had been getting rid of the supposedly-ugly hair along my bikini line, but I was replacing it with little pink bumps, which in retrospect, weren't very sexy or comfortable.

If you've tried to get around razor burn by using depilatory cream, know that you can end up with a chemical burn and plenty of skin irritation from those as well.

5. ... Or Ingrown Hairs, Folliculitis, And Itchiness

Ingrown hairs are just nasty, and can turn into painful, nasty pimples — or even folliculitis, an infection of the follicle that you definitely do not want.

And then there's the itchiness. Growing back your pubes has got to be one of the most uncomfortable things there is. Even if you don't end up with an infection, there's no way around the awkward feeling of having stubble on your nether-lips.

6. It Protects Your Vagina From Getting Irritated By Sex

Remember point #1? That natural cushion is your friend when it comes to all that bumpin' and grinding. Because your pussy is way less likely to get irritated during sex with a full bush protecting it, you can go longer and harder without ending up quite so raw at the end.

7. You'll Be Less Likely To Get Bacterial Vaginosis Or A UTI

Beyond just making sex feel better, pubic hair also helps protect you from getting bacterial vaginosis or a UTI, by working as a net that catches the bacteria that flies around during sex. I know that since I stopped waxing, I get fewer infections.

8. It's A Good Litmus Test For Whether You're Sleeping With A Douchebag

I've never had someone reject me for having a full bush, but I can say the one partner I had who vocalized that he "preferred" less pubic hair also happened to be the most unskilled in bed, and said he "just wasn't that into going down on women." The guys who dug my bush, on the other hand, tended to be the best at giving head. Coincidence? I think not. If you love pussy, you're not afraid of pubic hair, or women looking like grown-ass women.

9. You Can Use It To Your Advantage During Sex

All that waxing and shaving over a lifetime is expensive. On top of that, the "female" razors have an unspoken "pink tax" — meaning women have to pay more for them than for the "male" versions of the same product. On average, women spend $1,351 a year in extra costs due to the pink tax. We already also spend a ton of money on menstrual hygiene and all the other cosmetic upkeep taxes society puts on women, so why not eliminate this one?

11. It Might Make You Be Feel More Body Positive And Womanly

For me, going full bush has made me feel like more of a "natural woman," as Aretha calls it. When I look at myself in the mirror, I feel less like a girl, and more like a classic painting. I've come to find the hair sexy, rather than something to "manage" or rid myself of.

In fact, that's the reason I probably will keep shaving the bare minimum of my bikini line when I wear a swimsuit (or opt for boy shorts). I feel like my pubes are very intimate and sexy, and that you should have to earn seeing them. That feeling isn't based in shame now — it's based in pride.

I shave my legs and armpits (well, usually, that is), because I like the way it feels, and because it doesn't open me up to many health risks. I'm opting in to one beauty standard, but the point is, it's my choice, rather than something I feel obligated to do. For a while, getting rid of my pubes felt like a fun choice, too. And then, it just felt like a painful obligation. It was powerful to realize I could just opt out. Turns out, I'm still sexy.

More like this
Tilda Swinton’s Neon Yellow Hair Is More Than A Style Statement
By Justine Knight
Here’s Your Daily Horoscope For September 23, 2022
By Mecca Woods
Chelsea Clinton On The Best Advice She Ever Got From Her Mom
By Brianna Kovan
Everything To Know About Taylor Swift’s 10th Studio Album, 'Midnights'
By Grace Wehniainen and Jake Viswanath
Get Even More From Bustle — Sign Up For The Newsletter