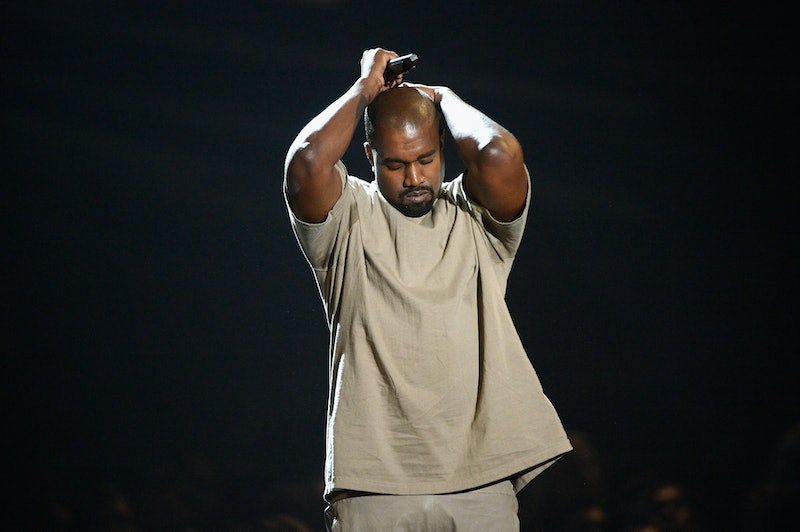 You know that thing where you wake up and a millionaire is asking a billionaire for money on Twitter? That was what happened on Monday, and I have just this to say about it: Kanye West can't really be $53 million in debt, right? I didn't go to sleep on the Planet Earth and wake up in Crazytown, where someone who's supposedly worth over $100 million is in the red for half of that? For that to be true, Kanye would've had to spend over $153 million. What? And, like, when would this have happened?

I don't know if you've heard, but Kanye West is married to Kim Kardashian, and if anyone knows how to keep track of money, it's the Kardashian-Jenner family. I highly doubt that Kris Jenner would've allowed Kanye to marry in if he was in the hole that deep, considering how a big part of marriage is, you know, combining finances. And that's not even taking North and Saint West into account; there's just no way that Jenner would've allowed Kanye to put their futures in jeopardy like that. But these are just my emotional reasons for not believing that Kanye could really be hurting to the tune of $53 million, as he claimed on Twitter in his bizarre tweets to Mark Zuckerberg.

But let's talk about the actual logical, economic reasons that it's very unlikely that West is in as much debt as he says he is. The exact monetary worth of a celebrity is always a tricky thing to estimate, but the lowest number I've seen for Kanye West's net worth is $145 million. (I've also seen it as high as $180 million, but let's stick with the lower number to be fair.) And now let's look at what Kanye has done recently. We don't have numbers yet on The Life of Pablo, because it was just released Feb. 14, but as Kanye pointed out himself, Tidal is currently the number-one app in the world, so people seem to be buying the album. He also just debuted Yeezy Season 3, a fashion line that has sold well enough for him in the past to continually expand it.

And that's just in the past week or so. There's also Kanye's collaboration with Adidas, rumored to be worth around $10 million as of 2013. And in that same year, he released his album Yeezus, which, while not a big seller itself, inspired The Yeezus Tour, which was one of the highest-grossing of 2013. It made $25 million from just 18 dates, so it seems like Kanye could make that $53 million back with a Life of Pablo tour. Even just 36 tour dates should net him around $50 million, based on the example of Yeezus, and he could then ask for the other $3 million from Kim Kardashian, who I'm pretty sure gets that amount of money every time someone downloads her app. (No, but seriously, Kardashian has a rumored net worth of $85 million, so I'm pretty sure she could swing it.) Or Kanye could just wait for his mansion to sell. That $20 million price tag should put a serious dent in whatever debt he's carrying. If any.

At the end of the day, I have no idea whether to believe West or not. I don't know his life. What I do know is that if he is in debt, asking Mark Zuckerberg to float him a cool billion just months after buying Kim Kardashian 150 Christmas presents isn't the most socially aware move. Just a thought.