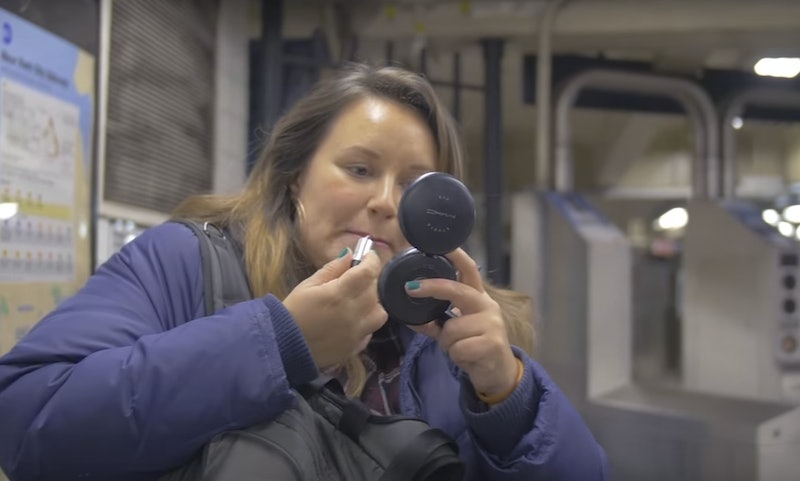 By the time Valentine's Day comes around, we single folk have already endured the worst; we've been through Thanksgiving, Christmas, New Year's and January — the most depressing month of the year. So when I watched this video featuring a single woman panhandling for a date on the subway, I nodded to myself: yeah, that sounds about right. Despite the fact that I strongly believe it's important to not look at being single as a sentencing, I get that post-holiday, pre-Valentine slump. Even if you're incredibly confident in your single status, after months of being berated by relatives, and scrolling through couples social media parades, it can get a little bit daunting.

NYC comedian Jana Schmieding had an inkling that other single women might be able to relate to this feeling, so she did what every single girl jokes about doing at least once — she went around the city asking for a date. The results, as you might have guessed, are very entertaining. Partially because she's a comedian and has great timing, and partially because the hidden camera charade was both cringeworthy and brave. The act was one of those jokes that's not a joke, if you know what I mean. It's the kind of idea that would come up with friends after a long night of unsuccessful swiping — you might turn to your friend and say "If I don't get a match soon, I'm going to hit the streets and panhandle for a date," and you'd both laugh, but ultimately never put any real consideration into the act that's far too bold for soicetal standards ... We're much more comfortable asking for dates behind the protection of an app. All Jana did was remove the screen. Enjoy some highlights below.

Typically on a NYC subway, when someone comes on the train and asks for everyone's attention, everyone does the opposite. People listening to music wedge their earbuds in farther, people with books pretend to be captivated by the pages, and people without props avoid eye contact at all costs. But once Jana said she wasn't asking for money, the energy changed. People were no longer trying to look busy, they were awaiting entertainment.

After A Few Initial Laughs

It seemed the subway passengers could not take Jana seriously. Despite the fact that she has serious doubts going into it, she couldn't help but be deflated.

In a sudden twist of events, one passenger steps forward with interest. The rest of the train car claps with approval. It's as if all of the passengers know Jana's struggle all too well.

What started out as a comedy video turned quickly into an inspirational, heart-string puller. People on the train started to offer words of encouragement, they shared their own personal stories and gave Jana so much more hope than she sought after.

More like this
What Is "The Ick?" The TikTok Dating Term, Explained
By Courtney Young
The Most Compatible Life Path Numbers, According To Numerologists
By Kristine Fellizar
9 Alternatives To The 3-Day Texting Rule In Dating
By Ginny Hogan
Meet The Disney Imagineer Bringing 'Guardians Of The Galaxy' To Epcot
By Charlie Mock
Get Even More From Bustle — Sign Up For The Newsletter