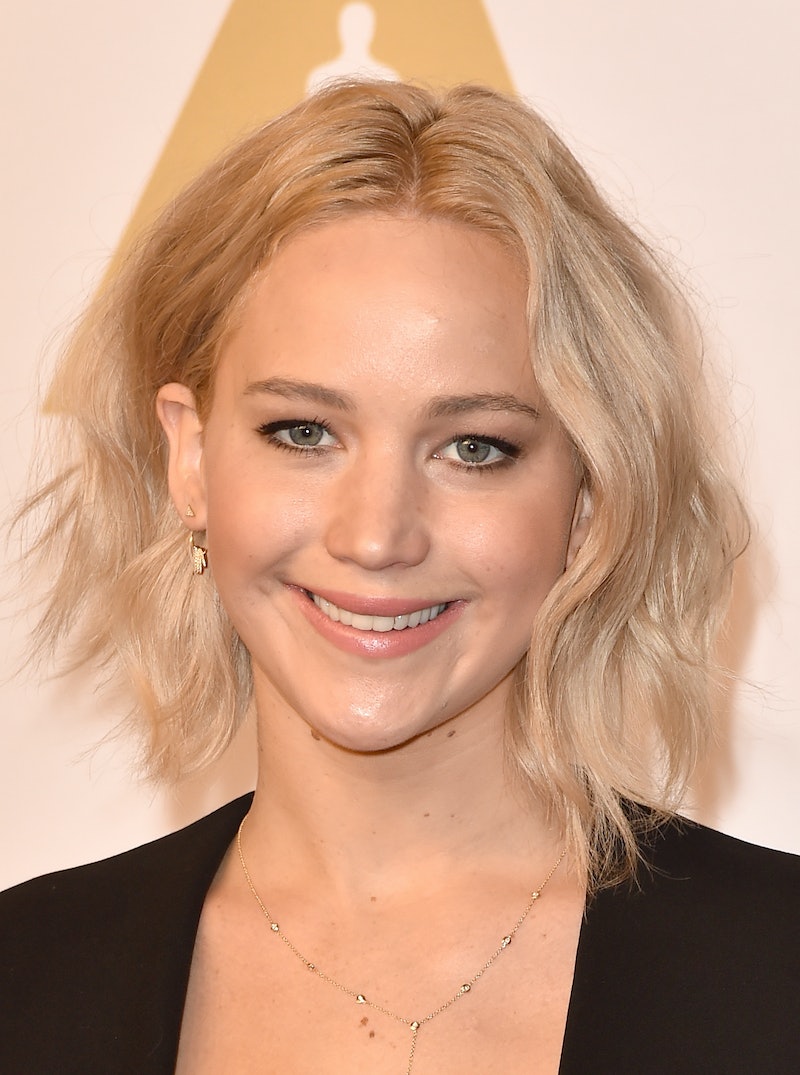 While the rest of us were scrolling past endless Instagram photos of red roses, chowing down on candy hearts and — OK, I admit it — watching the Bachelor 20 special on Sunday night, elsewhere in the world, something magical was happening. Because get this: Jennifer Lawrence and Aziz Ansari spent Valentine's Day together. Unfortunately, photos of their outing have yet to surface, so there is no physical evidence that this happened, but lucky for you (and me), People has all the details. Apparently, it was a pretty friendly get together, but I can't help but wonder if this really means Lawrence and Ansari could be dating.

But first, the facts. Their adorable V-Day dinner at Brooklyn restaurant the Commodore sounds like it was delicious, since they ordered kid-approved birthday party food like nachos and mac and cheese. And according to witnesses, they were "chatting and laughing" and seemed to be "pretty good friends," so it's not like anyone was making out or proposing marriage or anything. Just eating dinner, drinking wine, and catching up, just like friends do.

The whole evening seems pretty platonic so far, right? But let me remind you of something called The Time Jennifer Lawrence Gave Aziz Ansari A Piggyback Ride After Saturday Night Live:

In case you missed that particular photographic gem, it happened after their mutual friend, Amy Schumer, hosted Saturday Night Live. They went to an after party together that ended in Lawrence giving Ansari a ride to his car in the most literal sense of the word. After that, they even spent Thanksgiving together with Schumer later that month, so they've been spending a lot of time together recently.

So yeah, their Valentine's Day outing seemed friendly, and they're certainly not the first people to spend the day with a friend instead of a significant other. But add up all the little details and it seems like something could be happening. Ansari is reportedly now single after breaking up with longtime girlfriend Courtney McBroom last month, and as far as anyone knows, Lawrence is single too. They've been chummy lately, and they spend the most romantic holiday of the year together. Seems like something could be going on, right?

Are they dating? Did Amy Schumer set them up? Will they get married? Or are they just friends and I'm getting my hopes up for no reason? These questions will all be answered in good time, but for now, it's kind of a mystery. But that's fine. If you need me, I'll be passing the time by dreaming up what would happen if Katniss Everdeen and Tom Haverford ever met and fell in love in a post-apocalyptic version of Pawnee, Indiana until the answers have been revealed.

More like this
Jennifer Lopez Found The Perfect Ben Affleck Throwback Video For Mother’s Day
By Stephanie Topacio Long
Ryan Reynolds’ Mom Hilariously Tests His Patience In A Mother’s Day Video
By Brad Witter
Is Megan Fox Pregnant? MGK Gave A Shout-Out To Their “Unborn Child” Onstage
By Hugh McIntyre
Kelly Osbourne Found Love In Her Best Friend & Now They're Expecting
By Vivian Iroanya and Rachel Mantock
Get Even More From Bustle — Sign Up For The Newsletter