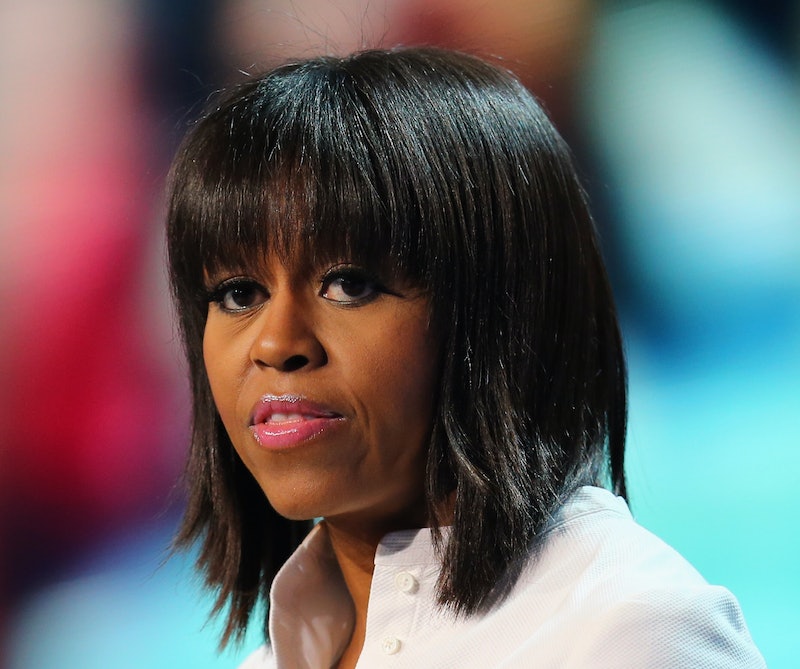 Don’t let the Jane Fonda bangs fool you. Michelle Obama is still Chi-town born and bred, and she isn't one to suffer disrespect, as evidenced at a Democratic fundraiser in Washington this past Tuesday. While at the lectern, the First Lady was heckled by a gay rights protester pushing for President Obama to sign an executive order barring federal contractors from discrimination based on sexual orientation and gender identity. According to NBC, the First Lady approached the disruptive attendee, threatening to leave the fundraiser if her antics continued. The woman was promptly escorted out, at which point Mrs. Obama returned to the lectern and finished her speech. The heckler, later identified as a GetEQUAL campaign activist Ellen Sturtz, told the Washington Post that she was surprised by the First Lady’s actions. “She came right down in my face,” Sturtz said. “I was taken aback.”

In my wildest dreams where my day to day existence is accompanied by a seamless soundtrack, this would be the moment where the record screeched to a cacophonous halt.

So, you mean, to tell me, you were SURPRISED that, after berating this woman in a public space, she had the self-respect to challenge you? Gasp. The audacity! I, for one, applaud the FLOTUS. I think she may have bigger balls than her husband—metaphorically speaking, of course.

I don't mean to diminish the plight of Sturtz by any means; federal equality, across the axes of class, gender, sexuality, and race, is no marginal issue. However, I'm dismayed by her approach. Derailing the First Lady’s platform in order to plug for your own? There are better ways to call attention to your issue.

Even more disconcerting are the reactions to how Mrs. Obama handled herself in the situation. Some user comments on media outlets had a decidedly negative tone, questioning Mrs. Obama's class and dignity. In my mind, these one-sided accusations seem to implicitly beg the question that still makes my ears bleed to this day: “Why are black women so angry?”

The angry black woman stereotype has been popularized in television and cinema, mediums that poke fun at the overbearing, over-emphatic “sista” who careens into a tornado of neck rolls, finger snaps, and F-yous at the slightest hint of disrespect. Admittedly, I've shared a few laughs over this trope. But a problem arises when what’s on the big screen is ascribed to the real-life demographic. We aren’t all angry. And when we are, it’s probably because you pissed us off—not because black women have some genetic mutation that predisposes us to this sort of comport.

The phrase “angry black woman” is debilitating in that it paints black women as a monolith. We are conceptualized as Godzilla-esque caricatures who storm through life, swatting at helicopters (and white people) with no rhyme or reason to our rage. This framing is disempowering because it negates the legitimacy of our feelings. Any form of self-expression or attempts to stand up for ourselves are dismissed as out-of-line, unnecessary and just plain angry. We are then tossed into the “angry black woman” box with Tyler Perry’s Madea.

And the FLOTUS, despite her best efforts to embody decorum, has been pigeonholed as well for what seem deem as a momentary lapse in etiquette.

Let's be real, folks. The First Lady is not just a figurehead. She is not just a black woman. She is, first and foremost, a human being. A public figure expressing their humanity and defending his or herself is no more irreverent than any one of us speaking out. Diplomacy, my ass.

And no, I’m not angry. I’m just expressing myself. My racial status should never bar me from that.