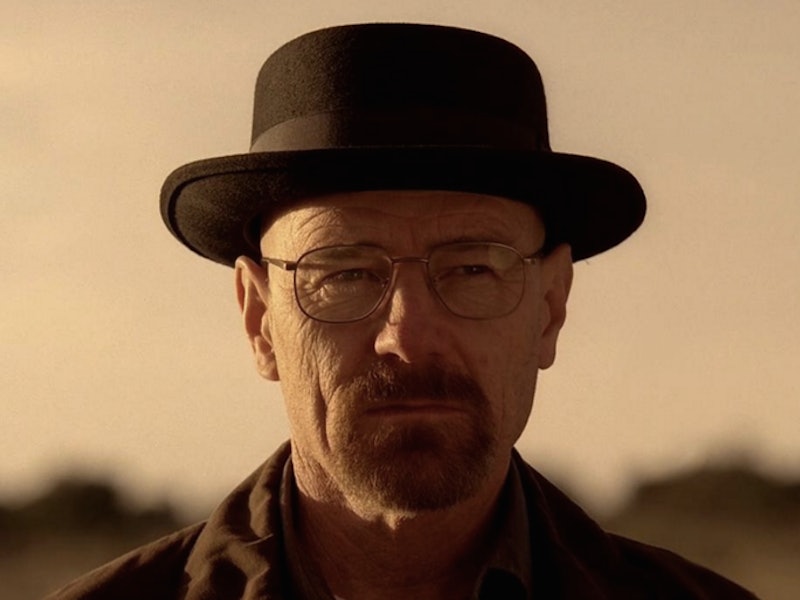 Here's the thing about spin-off shows: no matter how hard they try to be their own unique entity, fans are going to occasionally grow nostalgic for the show and characters that helped to make the spin-off star famous. That's because, despite what a certain Frozen queen tries to teach us, we as a society have a hard time letting go of things. (Just look at the upcoming revivals of Gilmore Girls and Fuller House!) So now that Breaking Bad 's spin-off Better Call Saul Season 2 is about to debut, naturally many viewers are already curious about whether a certain high school chemistry teacher will show up on our screens at some point in the near future. Will Bryan Cranston's Walter White ever appear on Better Caul Saul Season 2? Unfortunately, that answer still remains up in the air... for now at least.

Ever since the spin-off series was announced, fans have been yearning for a Walter White cameo, hoping beyond hope that Vince Gilligan would answer our desperate pleas. But just like the show itself, the writers and actors are being very shady in regards to specific details about when/if this will ever actually come about. And while there has yet to be any official announcement of any Cranston guest spot on Better Call Saul Season 2, that doesn't mean it's never going to happen, especially considering how willing the actor is to make an appearance — so long as it's beneficial to the storyline, of course.

"If Vince thought that there was some legitimate reason why my character would brush up against those characters, I would do it," Cranston told Access Hollywood last year at Comic-Con 2015. "I would do it in a heartbeat because I owe him – and because it's a great show." Meanwhile, Gilligan is more than up for incorporating Walt into the plot and once said to the New York Daily News that "It would be a shame if the show had its run — hopefully a very long run — and he never appeared." So I think it's safe to say that the show has every intention of bringing Cranston on. It's just a matter of when.

That being said, it seems very unlikely that Cranston will show up in this season. For starters, according to his IMDB page, he has a lot of 2016 projects that are still currently in production, so his schedule may not allow for it. Then there's the fact that Better Call Saul takes place six years before Saul became Walt’s shady lawyer, so the writers may want to incorporate his character further down the timeline. Not to mention that the series could use this delay to its advantage — hoping that the longer they take to showcase Walt and Jesse, the longer the show will continue to go on. Because, let's be honest, we'd keep tuning in indefinitely if there was the slightly chance of seeing these characters brought to life again.

So even if we don't end up seeing Cranston throughout the second season, just take heart in knowing that there is a method (emphasis on the "meth") to the madness and that the writers have every intent on bringing the one who knocks back to life.