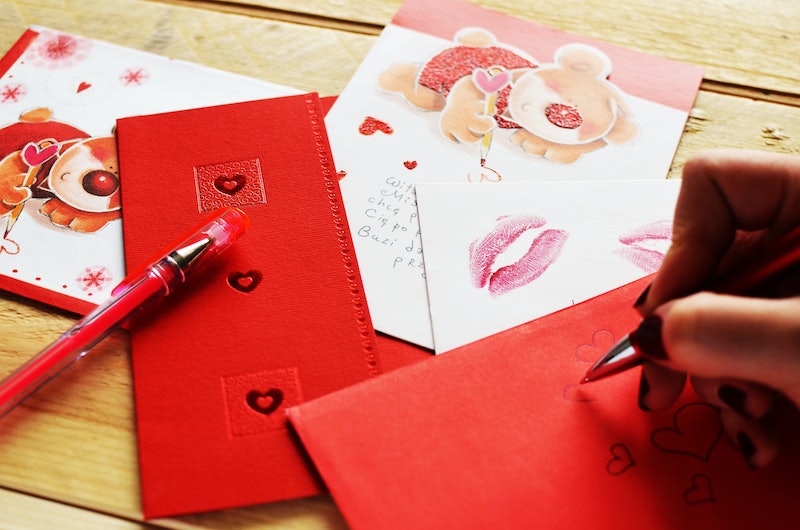 On Feb. 14, 2016 — Valentine's Day — filmmaker Tani Ikeda created a hashtag on social media to empower survivors of sexual violence. The hashtag, #SurvivorLoveLetter, caught on quickly — and truthfully, it's no wonder that it did. #SurvivorLoveLetter enables sexual violence survivors to tell their stories on their own terms, and beginning on Feb. 14 and continuing through the beginning of the next week, the letters have been flooding into social media. The Tumblr associated with the movement asks people to "Write a declaration of self love or honor a survivor in your life at #SurvivorLoveLetter," and now these powerful letters are spreading via Instagram, Twitter, and more.

Although the hashtag has continued past Valentine's Day, Ikeda told the Daily Dot that she created it on Feb. 14 for a very specific reason: "I imagined what it would mean for my younger self to wake up on Valentine's Day and read message after message of public support for surviving," she said. "That's when I knew I wanted to create #SurvivorLoveLetter." Ikeda is a recent graduate of the University of Southern California and the co-founder of imMEDIAte Justice, a program for girls aiming to change sex education through filmmaking. She is also a survivor herself. According to piece she posted on her website during the summer of 2015, she wrote what became the first #SurvivorLoveLetter in her journal: "After surviving my rape, I spent 10 more years surviving chronic depression and a perpetual feeling that I had to continue to fight for my life. This is my survivor love letter. Don't give up on your own happiness."

#SurvivorLoveLetter is generating a lot of beautiful art and writing from the people participating, but it's important for many more reasons beyond that most obvious one. The hashtag has helped to create both virtual and physical safe spaces where survivors of sexual violence can share their experiences with other survivors, family members, friends, and anyone else who is interested in reading. Clicking on the Instagram or Twitter hashtag will transport readers into a world of honesty, validation, support, and most importantly, love. Additionally, the community created by the movement also allows us to better understand the narratives of survivors in the most intimate way — through survivors existing in conversation with themselves and with other survivors.

Some tweets were shorter thoughts; for example, Twitter user Hannah Stein tweeted about the different ways people heal. Others were important words of encouragement and validation, like those from Twitter user Demiliza Saramosin. Shruti Purkayastha's tweets reminded survivors that it's never too late to heal, understand your emotions, and share your story with the world (or just share it with yourself).

Other tweets shared photos of full notes like this one from Tom Ikeda, labeled "This is my #SurvivorLoveLetter to my daughter," and this lyrical letter shared by Sofia Rose Smith addressed "Dear One."

In a culture that so frequently invalidates sexual assault survivors and blames them for the abuse inflicted upon them by someone else, movements like this one are extraordinarily important. They can be accessed by people all over the world who might be experiencing an onslaught of negativity because of societal norms that blame victims and shame survivors. To say — as our culture so often does — "We don't believe you" or "We think you're to blame" only further harms people who are already hurting and afraid. But to take movements like #SurvivorLoveLetter, and to spread them, and to make sure they reach as many people as possible, says something different. It says what is needed. It says, "We hear you. We believe you. We are here with you."

And that is more valuable than any words can say.

All tweets have been included with permission from their users.

More like this
How To Fight For Reproductive Rights, Based On How Much Time You Have
By Courtney Young
Sandra Bullock, Girlboss Extraordinaire
By Matt Harkins & Viviana Olen
Lydia Leonard Is Setting The Record Straight
By Olivia-Anne Cleary
How To Add Music To An Instagram Post
By Emma Carey
Get Even More From Bustle — Sign Up For The Newsletter