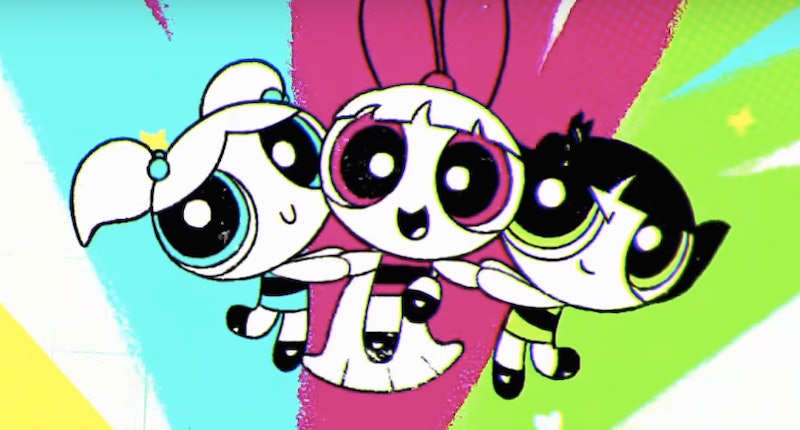 To start off, the song is sung by the self-described "feminist" indie rock n' roll band, Tacocat — which definitely goes along with the female empowerment feel of the show in the first place. The taco, cat, candy, Ramones, Go-Go's, etc. loving band is based out of Seattle, Washington and consists of four totally hip looking members: Lelah Maupin (on the drums), Eric Randall (on the guitar), Bree McKenna (on the bass), and Emily Nokes (on vocals and the tambourine). The crew has been performing together as Tacocat since 2007, and, now, they've been selected as the sound of the Powerpuff Girls' latest theme song. And, honestly, I can't help but credit them with giving the new theme song just the vibe we would expect from the Cartoon Network show. It's so catchy.

But, other than watching the new extended theme song video over and over again, is there another place that I can listen to this song? Like, seriously, can I download it and replay it over and over again? Well, unfortunately, it seems as if right now the song has only been released along with the new theme song video, and it has not been released along with Tacocat's Spotify account or iTunes as of yet. However, what you can listen to on Spotify is Tacocat's latest 10 songs off of their newly released album, I Hate The Weekend, that came out on January 12, 2016, and their other previous albums titled, NVM, Woman's Day, and Take Me To Your Dealer. The band also has more of their music available for purchase on iTunes as well — including albums titled, Shame Spiral and their upcoming April album release, Lost Time, that can be pre-ordered (and does not have "Who's Got The Power?" listed in its already released track list).

So, what does this all mean? It means that, honestly, we're just going to have to wait and see how and when the song may be available for repeated listenings and downloads. And, in order to hold yourself over until then, re-watching the theme song video over and over again may be your only vice. But, hey, seeing the Powerpuff Girls in-action along with the song definitely adds to the fun of it.