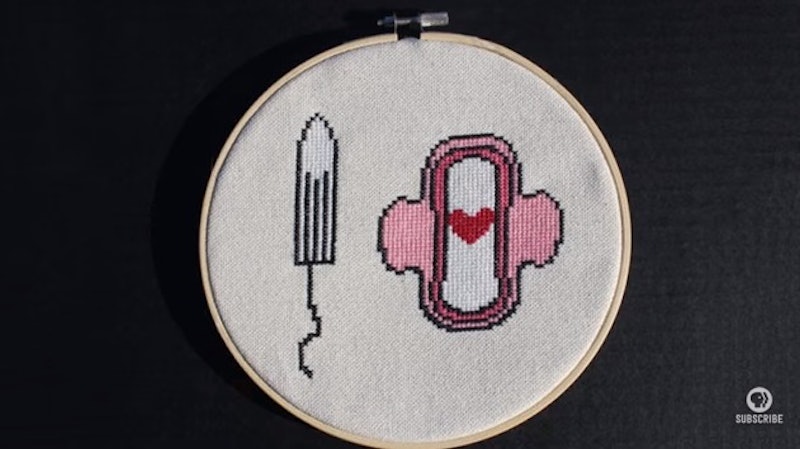 I've always kind of wondered ... why do I poop so much on my period? In a special "not so gross" episode of the web series Gross Science, host Anna Rothschild tackles a topic many people feel squeamish about: the period. And while most women want to know the answers to pressing period questions — like my query about pooping — the dialogue surrounding this natural bodily function remains relatively mum. So in an effort to normalize the conversation surrounding such a normal function, Rothschild set out to answer three commonly pondered period-related questions.

As Rothschild points out, there exists a stigma surrounding periods that can make it a tricky topic to traverse. Some people think they're gross, while others think they're too personal too discuss. But the reality is that radio silence on the subject of periods is bad news — not only for young women struggling to understand their bodily changes, but also for society as a whole. According to Dr. Kathryn Clancy, an anthropologist studying female reproduction whom Rothschild cites in her video, the dearth of dialogue on periods means basic studies on healthy, menstruating women still haven't been done. Without more conversation and more research on the subject, we perpetuate this cycle of silence that ultimately leads to lack of diversity in science. And that lack of diversity, my friends, is actually gross.

So let's get to talking, eh? Kudos to Rothschild and Gross Science for kicking off this important conversation. We now have the answer to that poop question. Scroll down to watch the full video for two more, including an explanation of what's actually in period blood. Because come on, you know you want to know.

If you feel like you spend a significant portion of your period on the can ...

... You aren't alone. Most women experience this phenomenon, and there's absolutely a physiological explanation for it.

Prostaglandins signal the uterus to contract so that it can shed the uterine lining. What does this have to do with pooping? Well, it turns out that some prostaglandins go rogue and wind up in the bowels, which they similarly instruct to squeeze — with obvious results. Secondly, progesterone levels drop during your period. If you've ever been pregnant, you know all too well that progesterone is constipating. It spikes during pregnancy, leading many women to have trouble going to the bathroom. Because progesterone drops during the period, it has the opposite effect.

So now you know!

Check out the video in its entirety below, and head over to Gross Science's YouTube channel for so much more cool episodes of the weekly series .