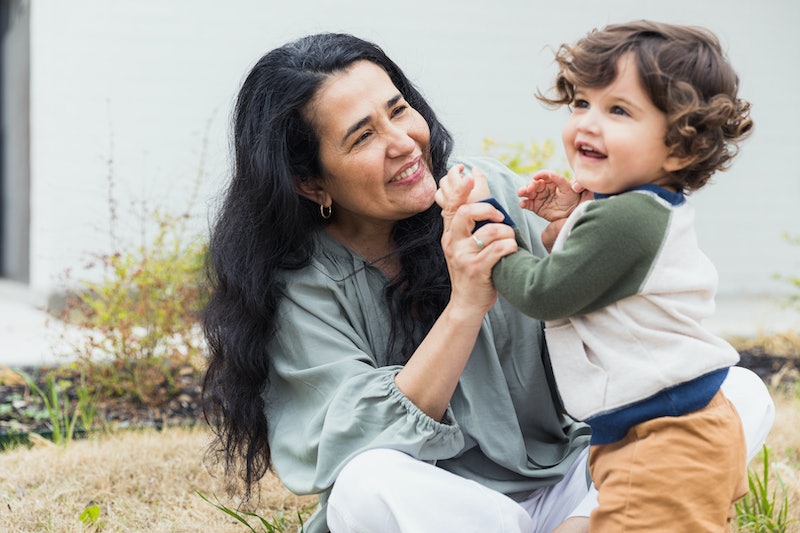 I am nowhere near becoming a mother — I recently upgraded to caring for three whole plants, and that is more than enough responsibility for me — but I do find baby name trends fascinating. Perhaps in response to the recent slew of "Hayden" and "Peyton" and "Brayden" kiddos gracing us with their collective presence, retro baby names are making a comeback. I am simultaneously thrilled and grumpy about this. Why the ambivalence? Well, Let me explain.

While I'm grateful for the move away from substituting "Y" for "I," if for no other reason than that I am constantly confused about how to spell and pronounce peoples' names now, I also hoard unique and underused names for my own future babes. And I get really irritated when a name that I've had picked out for literal decades suddenly appears on a Top 20 list. Does that make me a snob? Yes. I own it. I was the only "Madeleine" in my school, and I liked it, and now I want to pass that experience on to my children (albeit with slightly easier-to-spell monikers).

According to a wide variety of sources, a good proportion of the fastest-rising names are super retro — by which I mean that they peaked at least several centuries ago. Some of them have been used as cultural references since the Bible. I do not have such an old name, but wouldn't that feeling be awesome? To know that you share a name with a nun and saint from the 800s? (No, I didn't forget a one in front of that — I actually mean the 800s.) OK, well I think it would be, at least.

These eight names are both super old-fashioned and super hip. So go forth and name your babies; just please don't steal anymore of my planned names.

Aurelia is super old-school — like, Roman Empire, Julius Caesar's mom's name old-school. Pronounced "Aw-REEL-ya" and meaning "the golden one," Aurelia was one of the fastest-rising baby names of 2013. It's elegant and beautiful, and now I want to claim it for my future spawn, OK?

According to baby name database Nameberry, Emmett is on the rise for both genders in 2016, but particularly for girls. Perhaps it's because it's a less common variation on the reigning number-one name (Emma). Or maybe it's because of its relation to the Twilight series. Heck, maybe it's because it just sounds cool. For whatever reason, Emmett, which means "universal" and previously peaked in the 1880s, is back on top (ish).

Having last experienced popularity at the turn of the century, Hazel may have seemed like a strange pick for Julia Roberts' daughter in 2004 — but it turns out that Big J was just ahead of the curve. Now listed at number 37 for baby girls, Hazel was also chosen by Emily Blunt and John Krasinski for their kid, as well as by John Green for a lead character. (Are you the only person left who hasn't seen or read A Fault in Our Stars? Do yourself a favor and get on that.)

Though I have yet to meet anyone named August, it's become increasingly popular among celebrity parents (hey, Mariska Hargitay! Hey, Garth Brooks!) as a name that's uncommon but not, like, super weird. It's on the rise for both genders, though it still has a ways to go before it reaches the popularity it experienced in the 1800s — back then, it was among the 100 most popular names in the United States.

You know how everyone knows between three and five Rachels and Sara(h)s? June was the 1920s equivalent. It didn't even crack the Top 1,000 again until 2008. Now it's at number 317 for girls, especially as a middle name, and on a steady rise in popularity for boys as well. Just FYI, this is another name that I now love and claim as my own.

Ava, which has been a Top 10 baby name for several years now, means "life," and was originally a variation on "Eve." Unlike some of its competitors, Ava is an ancient moniker — for instance, St. Ava was a nun in 845. I have a feeling there were no St. Madisons or St. Peytons running around then. Just a hunch.

Felix means "happy and fortunate," and isn't that what everyone wants their child to be? Currently situated at number 267 and steadily on the rise in the United States, Australia, and New Zealand, Felix hit its American peak in 1910, though it's been around since the times of the Bible. Yes, there is a Felix in the Bible. I was shocked too.

Between 1900 and 1936, Ruby consistently cracked the Top 50 baby name list. Though its revival is fairly recent (it currently hovers around number 90), Ruby has amassed a number of cultural references over the years. The Rolling Stones wrote "Ruby Tuesday," Kenny Rogers wrote "Ruby Don't Take Your Love to Town," and Charles Frazier named an amazingly spunky character Ruby in his Civil War epic Cold Mountain.

More like this
Starbucks’ Chocolate Cream Cold Brew Tastes Like This Retro Candy
By Emma Garza
11 Trends From The ‘90s That Made You Feel So Cool
By Julie Sprankles
Meet The Disney Imagineer Bringing 'Guardians Of The Galaxy' To Epcot
By Charlie Mock
Remember These Ancient Pieces Of '90s Tech?
By Lucia Peters and Emma Carey
Get Even More From Bustle — Sign Up For The Newsletter