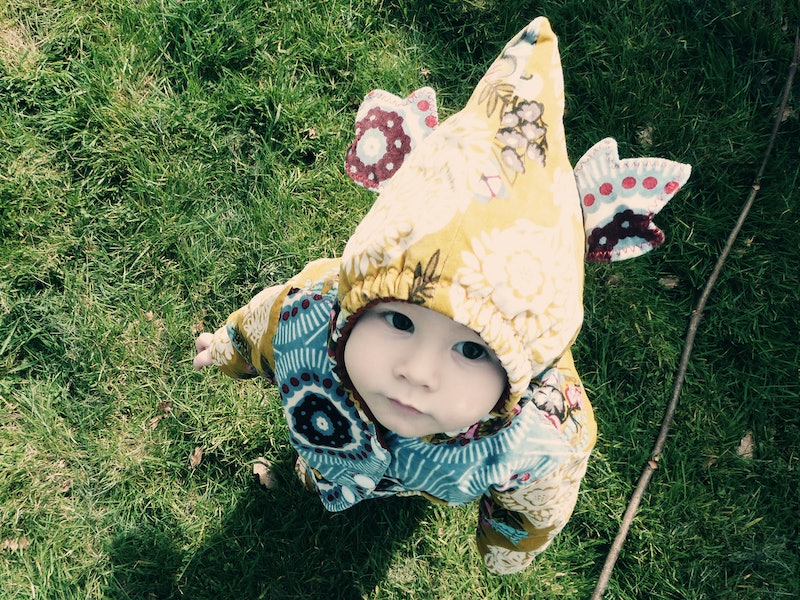 Every year, parents get more creative naming their babies, and to demonstrate that fact, we have Nameberry's list of top baby names of 2015. Curiously, the results demonstrate one thing in particular: Old names are IN. And when I say old, I mean old. Not old as in 1970s. Old as in 1870s. So much for the trend of calling your kids by Instagram filters, I guess.

But this is actually great news. For starters, it means that people are coming to their senses and deciding not to name their offspring Elsa and Katniss, both of which fell out of the top 100 names. Thankfully. I love those movies, but... no. Aside from fictional movie characters, this also hopefully means that parents are taking a break from giving their kids eccentric names like Psalm, Lyrik, and Alabama. Whatever happened to Mary and John?

So, let's take a look at the top five male and female baby names according to Nameberry (although it can also be argued that any name is a male or female name if you want it to be, because gender-neutral baby names are awesome) and took a look at prominent figures of the past with the same moniker. Do parents have these people in mind when they name their children? If not, just pretend, because these people are hella fabulous.

Let's start with the gals:

I know what you're thinking: Princess Charlotte ignited this one. I won't disagree; but do you think Will and Kate invented the name Charlotte? No. The answer is no. Don't forget about Charlotte Bronte, the 19th-century writer who wrote Jane Eyre, and Charlotte Hawkins Brown, who founded the Palmer Memorial Institute in 1902. Get in line, Princess.

Ah, yes. Amelia. Many remarkable women have been named Amelia. There's Amelia Earhart, the first female pilot to take a solo trip over the Atlantic. And then there was the greatest Amelia of all: Amelia Bedelia.

Ava Gardner was a stunning American actress born in 1922 who later signed with MGM Studios. If you've named your daughter Ava... she has some big heels to fill.

You old fart, you. You might remember Olivia de Havilland (born 1916) from Gone With the Wind, or her Academy Award-winning performances in To Each His Own and The Heiress.

Cora Witherspoon is old. Really old. So old, she's dead. She was an American film and theater actress who worked for nearly half a century. No wonder you named your daughter after her — her list of IMDb credits is quite expansive.

And here are the fellas:

Ezra? As in Ezra Pound? Right on. Pound, born in 1885, is largely considered most responsible for defining a modernist aesthetic in poetry. I have absolutely no clue what that means. Cool name, though.

In the Bible, Asher was one of Jacob's 12 sons; the name means "fortunate, blessed, happy one." In terms of popularity, it climbed more than 100 places in the last few years. Look out.

Herodes Atticus, born AD 101 (read: OLD), was a Greek orator and author. According to Wikipedia, his full name was Lucius Vibullius Hipparchus Tiberius Claudius Atticus Herodes. I wonder if he got made fun of in school. The above is a recent photo of him.

I don't even know how to say this. Is it DE-clan? De-CLAN? Whatever. Declan Mulholland was an Irish character actor you might remember from Doctor Who, Double Exposure, and The Land That Time Forgot. Or, if you're like me, you don't remember him at all.

Civil War vet Oliver Wendell Holmes Jr. also served as US Supreme Court Justice from 1902 to 1931. How regal. How dignified. And if your son can pull off chops like that...