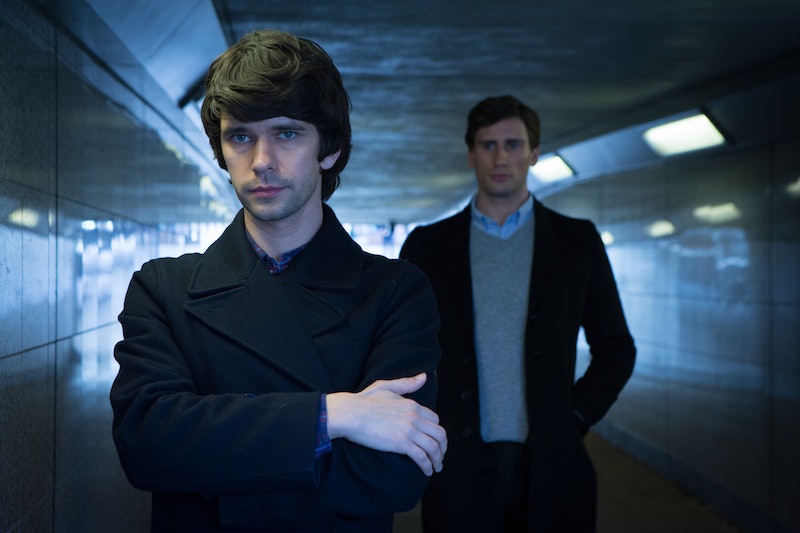 In a spy genre that has been around for decades, BBC America's London Spy put a new twist on a tale of espionage. In fact, the relationship between Danny and Alex (who turns out to be a spy) is more of a focus in this show — even after Danny finds Alex dead and must work to untangle the mess of what happened, despite not being a spy himself. So, after only five compelling episodes in this British miniseries, the question is: will London Spy return for Season 2?

Well, the answer to that is about as tricky as getting information out of a spy. Certainly, given the critical praise of London Spy , you'd think it would be guaranteed a second season. According to the show's writer/creator, Tom Rob Smith, BBC has already expressed interest in a second season — but, the trouble is, he doesn't think the show needs anymore episodes: "The BBC have asked and my instinct is that it probably shouldn’t continue." As Smith further explained to The Guardian, the focus of London Spy was truly on the relationship between Danny and Alex, but he felt it was resolved in the fifth episode to the point that he had no desire to continue the story with a different focus.

However, if you want to see more from London Spy's wonderful cast, I've got you covered on where else to find them once you've finished this mini-series.

This adventure film spans multiple centuries, telling the stories of many people throughout time and how they are bonded beyond the limits of a single lifetime. In addition to starring London Spy's Jim Broadbent, it also co-stars Tom Hanks and Halle Berry. Plus, London Spy star Ben Whishaw is also featured. If this adventure drama has piqued your interest, it's available on Amazon Video and YouTube.

Edward Holcroft played a spy once before taking on the role of Alex in London Spy — he was the pompous Kingsman recruit, Charlie, alongside the film's hero, Eggsy. Charlie was definitely way more evil than Alex, but you can check out Holcroft's other venture into the spy genre on Amazon Video and YouTube.

In the mood for a period drama? Holcroft appears in Wolf Hall as George Boleyn, the brother to the notorious Anne Boleyn. The short series follows the goings on (and political intrigue, of course) in King Henry VIII's court. The show's first season is available on Amazon Video.

Of course, if you're looking to catch London Spy star Whishaw in another entry to the spy genre, your best bet is in either (or both, both is good!) of the recent James Bond films. Whishaw plays Q, the tech/gadget wiz who helps Bond on his espionage missions. Both Skyfall and Spectre are available on Amazon Video.

So, although London Spy may never get a second season, the stars keep themselves busy and there are plenty of other TV show and movies to catch them in. Plus, the spy genre isn't going away anytime soon — but, like spies themselves, you just may not always see it.

More like this
Everything To Know About The Possibility Of 'The Essex Serpent' Season 2
By Rachel Mantock
ITV’s 'Grace' Will Likely Return for A Third Season — & Many More After That
By El Hunt
'Who Killed Sara?' Won’t Return For Season 4
By Brad Witter
Grey's Anatomy Fans Refuse To Accept Kaimelia's Shocking Relationship Update
By Brad Witter
Get Even More From Bustle — Sign Up For The Newsletter