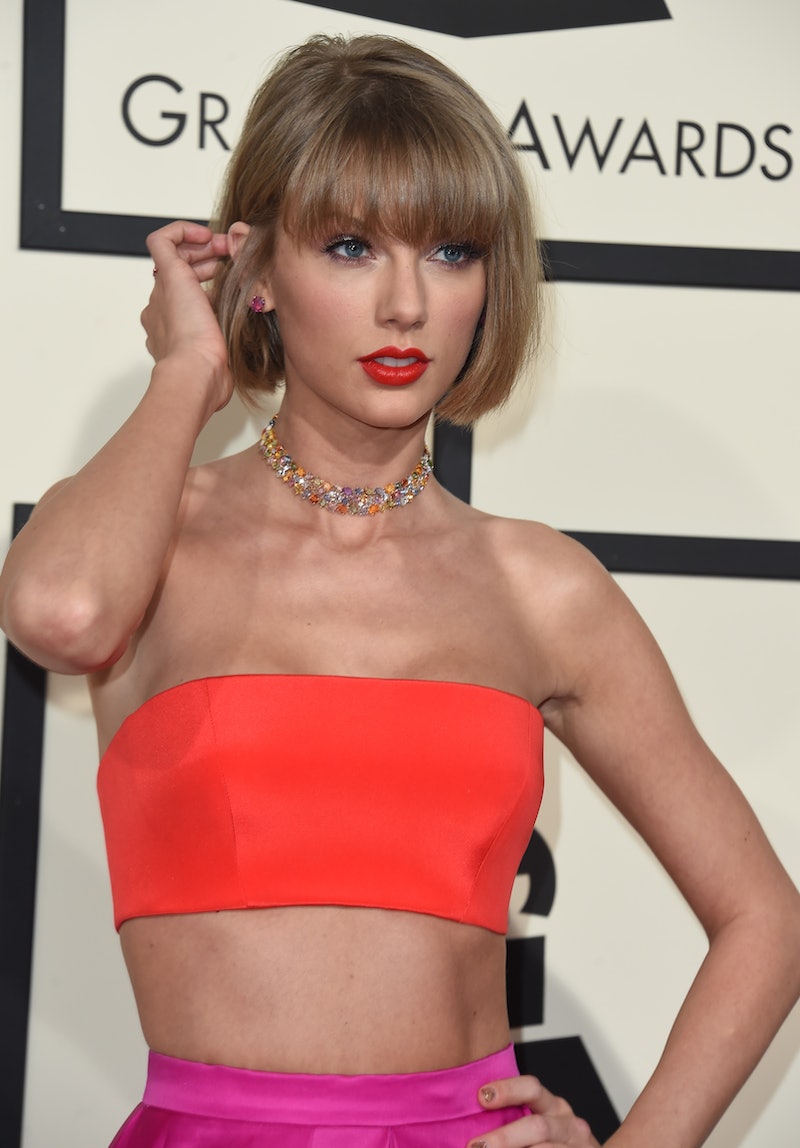 If you thought 2015 was this singer's year, wait until you see Taylor Swift at the 2016 Grammys. Swift is not only performing at tonight's show, but she's also nominated for some major awards — her song "Blank Space" is up for Record of the Year, Song of the Year and Best Pop Solo Performance, "Bad Blood" is up for Best Music Video and Best Pop Duo/Group Performance, and the album 1989 is nominated for Best Pop Vocal Album and Album of the Year. There's no doubt in my mind that she'll take home quite a few of these titles, but what am I really going to remember about Swift's Grammys appearance tonight? Her red carpet outfit!

In true Swift style, she's wearing a bright red and pink co-ord, paired with that "red lip classic" thing that we like. Her co-ord consists of an itty bitty tube top and a giant hot, hot pink skirt with a slit alllll the way up to here. It's a far cry from the totally prom-worthy look she wore to her first Grammys red carpet, but it's still very much in Swift's wheelhouse. She paired it with a simple choker necklace and strappy sandals.

The most notable part of her ensemble is probably her majorly different hair. Not only is it considerably shorter than her previous 'do, but she has bangs. Bangs! Can you even believe it? It looks so sleek and matches the minimalist, mature vibe of her outfit.

Look at that volume. Also, peep that lack of a belly button. The mystery is still alive!

Check out that pinky ring! Pretty edgy for Taylor, no? And she's rocking sparkly nail polish too — this look is like a '90s kid's Barbie dream come true.

More like this
The Very Best Quotes From Dr. Taylor Swift’s NYU Graduation Speech
By Grace Wehniainen
Harry Styles Performed A Snippet Of Taylor Swift’s “22” & The Crowd Went Wild
By Jake Viswanath
Doja Cat Wore Surrealist-Inspired Schiaparelli To The BBMAs
By Dominique Norman
Harry Styles Addresses The Theory That His New Song "Daylight" Is About Taylor Swift
By Jake Viswanath
Get Even More From Bustle — Sign Up For The Newsletter