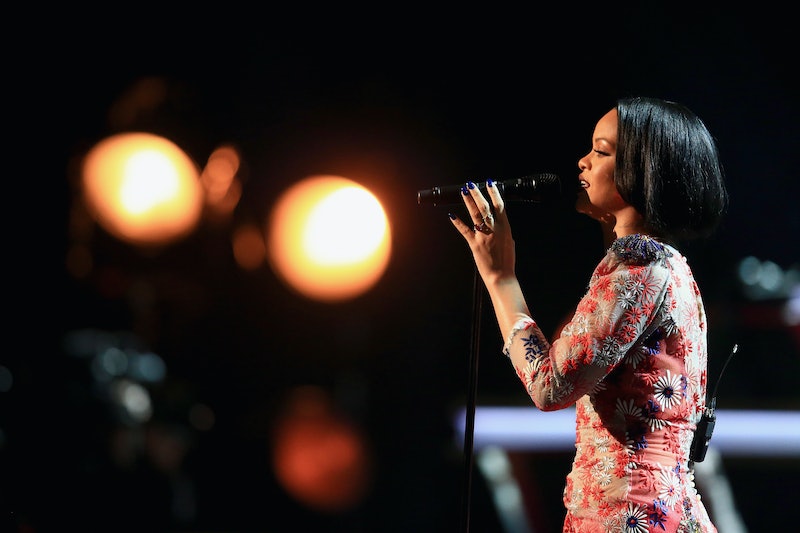 When Rihanna shows up at an awards show, the world basically stops turning. Is there anyone else who can pull off a giant fluffy cupcake dress and look like a total queen? Rihanna skipped 2016 Grammys tonight, after reportedly canceling her performance due to bronchitis, according to TMZ, and it's a real disappointment for any fans of her style — and her music for that matter. I was kind of expecting her to upstage herself, considering that she wore the Grammys dress of the decade in 2015. Seriously, that huge pink Giambattista Valli is the 2010s answer to J. Lo's green Versace from 2000, in my opinion.

So, where was Rihanna tonight? TMZ reports that the singer conducted rehearsals for her planned performance but ultimately made the decision to cancel due to her illness. It was probably the right choice considering that "a doctor on site recommended that she pull the plug on the performance because it could permanently damage her vocal cords," according to TMZ. Yikes!

As glad as I am that the mega pop star did what was right for her health, I can't say I'm not a tad disappointed that we didn't get to see what she planned to rock on the carpet (and on the stage) at the Grammys. Just to rub a little salt on our wounds, here's that famous Giambattista Valli:

It grows on me more and more every time I look at it. Rihanna is also fresh from presenting her Fenty x PUMA collection at New York Fashion Week, where she killed it in an outfit of her own design.

Even though I'm sure many will be disappointed to miss the singer at the Grammys, she's definitely delivering plenty of style to get excited about.