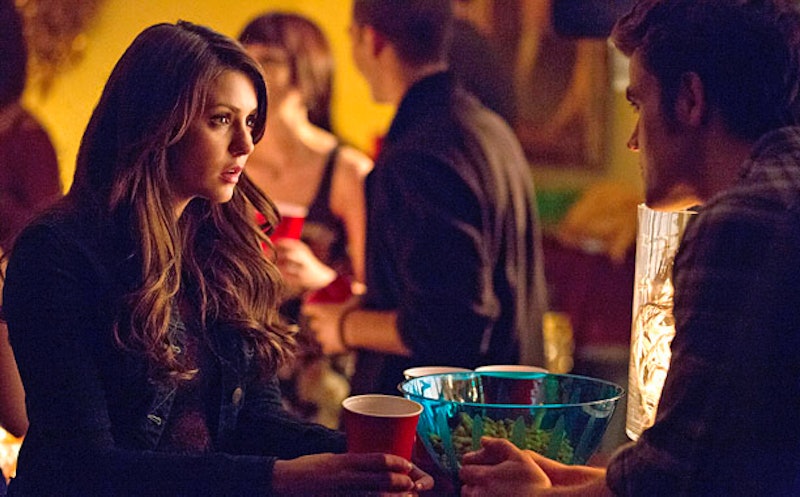 When we last left our favorite ragtag group of gorgeous, teenage supernatural beings, all hell was about to break loose. Katherine Pierce was human and dying and had just taken over her doppelgänger Elena Gilbert's body. This week's episode, "The Devil Inside," is all about Katherine trying to make her body snatching permanent. It's amazing, because for years I've been saying how great the show would be if Elena could just go away and it could be the Katherine Pierce show. Now that I have my wish (kind of…for the moment, at least), I know I was right all along.

Katherine manages to make her body-jumping permanent (but really, how permanent will it be? This is The Vampire Diaries, after all) thanks to some super-sleuthing and black magic. First, she has to find her body, which Damon has hidden. She's spectacularly cunning and figures it out basically as soon as she hears his clue (he put her in the tomb — where he says she belonged all along). Watching Katherine & Co. cement her spot in Elena's body is not nearly as fabulous as watching her ruin Elena's friends lives at every opportunity. Here are her top sabotage moments of the night:

1. She compels Matt to find out how Elena dumped him.

Okay, she really compels Matt for a lot of information. She needs to know things like Elena's birthday and which of her BFFs is her No. 1 BFF (boringly, they're equal, according to Boring Matt). The last piece of information she demands of him is the worst and the most cryptic: She wants to know exactly how Elena dumped him because it's going to, according to her, come in handy later. I don't even like Matt that much and I was pitying him the minute she said this.

That secret didn't last long. Caroline tells Elena about her moment of bad judgment (or, as Caroline/Klaus shippers everywhere call it: THE BEST THING EVER), and she waits until Tyler is within supernatural werewolf/vampire hybrid eavesdropping distance to repeat the news and get Caroline in major trouble. Tyler does not take the news well. (To his credit, Klaus did sire bond him, kill all of his hybrid friends, and kill his mom.) He couldn't have learned soon enough, considering he was hoping to get Caroline back and "start over." I don't dislike Caroline and Tyler, but now that Caroline and Klaus has happened, how could it ever stack up?

3. She dumps Damon and pushes him over the edge.

Damon is trying to get Elena back. He's been texting and leaving voicemails and Elena almost gets to him before the body snatch is complete. Over the course of the episode, Elena is fighting for control of the body and has it just long enough to call out his name and run into his arms before Katherine takes back over and the switch is permanent. It's kind of devastating, but then you forget all about it when Katherine delivers the break-up speech to end all break-up speeches. She tells Damon that he was right to break up with her because, even though she brings out the best in him, at the end of the day, he's evil and she can't be with him. It's Damon's worst fear articulated, and it pushes him over the edge. The episode ends with him and Enzo on the beginnings of what feels like a bloodlust bender. Earlier in the episode, he compelled Aaron to get the hell out of Mystic Falls, but he catches up to him and, well, it's not good for Aaron.

As for Katherine? She's in permanent residence in Elena's body and loving the freedom. For the first time in over 500 years, no one is chasing her. She's free to do some mother-daughter bonding. Oh, and get Stefan back.