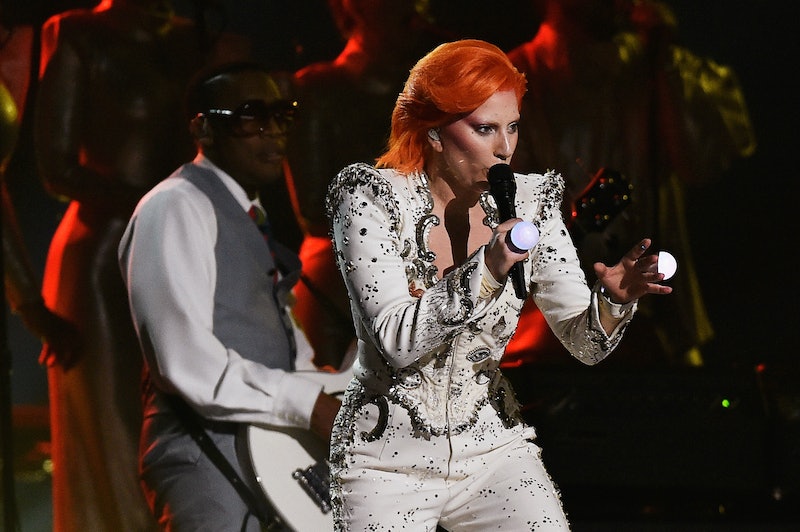 Considering the Grammys are the biggest night of the year in music, it was no surprise when a tribute to the legendary artist David Bowie, who recently passed away after a battle with cancer, was announced. After all, Bowie changed the music industry, and his legacy ever be forgotten — he deserves a tribute during the show, especially one touted to be the "longest performance" in the entire awards show. And during the 2016 Grammys, when the time for the tribute rolled around, it didn't disappoint: Lady Gaga performed a touching, beautiful tribute to David Bowie, the Starman himself, during the show that admittedly brought me to tears.

Prior to the performance, not much was known about the plan Gaga had in place: According to E! Online, all that was released were a few hints through the president of the National Academy of Recording Arts and Sciences, Neil Portnoy: "She will take us through quite a bit of history of David Bowie's repertoire... It's one of the longest, larger segments of the night." Also: "There's some very exciting brand new technology that's never been seen on television that will be a part of the segment."

Sure enough, during the performance, that "brand new technology" was apparent. As Gaga sang a medley of Bowie's most well-known songs — everything from "Space Oddity" to "Let's Dance" to "Heroes" were a part of her song list — heavy special effects played in the background and, occasionally, on Gaga herself. As the performance began, for instance, this is the beautiful image audiences were greeted with:

And it just got cooler from there. As Gaga went through more of Bowie's hits, including "Changes," "Ziggy Stardust," "Fame," and "Fashion" flawlessly the effects of the performance ramped up, producing colorful, almost psychedelic, smoke-like effects behind Gaga. It was a performance Bowie himself would have truly been proud of, and I can't think of any other artist who was more of a perfect fit for it.