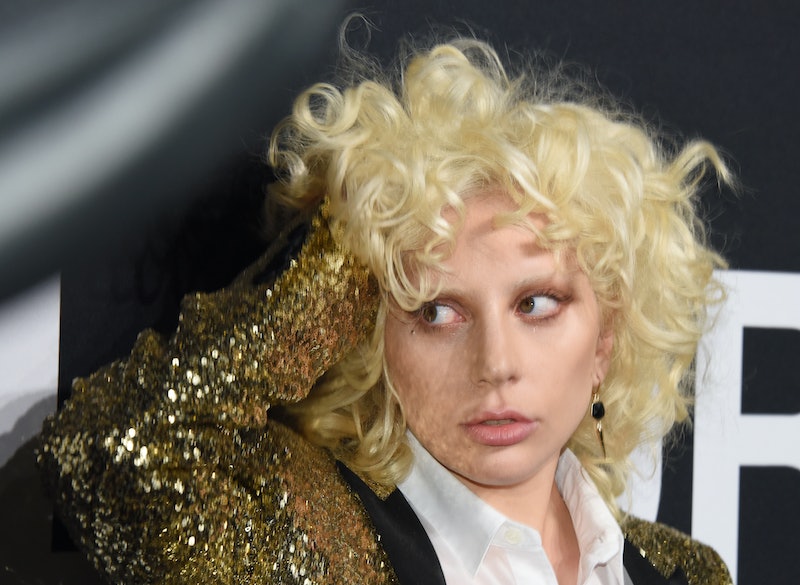 Few artists have influenced me on a personal level more than the late David Bowie. For two decades, I thought him indestructible — too glam, too raw, too real to ever not be here. Until the day he wasn't. Finding out that Lady Gaga would tribute David Bowie at the 2016 Grammys was the first beacon of hope in the dark days after Jan. 10. Finding out that Lady Gaga got a David Bowie tattoo just two nights before the awards show? That's just further confirmation that this man matters to her — that his influence and gravitas touched her so much that she would want to permanently etch his likeness into her skin. Tattoos are a huge commitment — and sometimes a really meaningful one. Gaga's latest certainly feels like both.

On the evening of Feb. 13, Gaga shared a photo of her new Bowie ink on Snapchat — The Starman's face that covered his 1973 Aladdin Sane album. According to People, she "Snapchatted the inking in progress Saturday night, captioning one shot, 'This was the image that changed my life,' and another, 'Hail Mary full of grace Saint Bowie.' On one she wrote, simply, 'Blackstar.'" The Aladdin Sane cover was undoubtedly one that touched many — that made every weirdo, vagabond, nerd, or outcast feel less alone. In fact, that's what Bowie did that throughout his whole career. And some would say that's precisely what Gaga has done with her team of little monsters, too.

It's rare to see Gaga crack such a thoughtful smile. She's so often glammed to the max, striking a powerful stance that reads "nobody can touch me. Nobody can hurt me." But getting inked with Bowie's likeness, she looks pleased. Like she's catching up with an old friend. And that's the thing about Bowie... he always sort of felt like an old friend. One whose classics you could select on your iPod whenever you needed a pep talk.

With her new ink in tow, I can only hope that's how Gaga makes us all feel on the night of Feb. 15.

More like this
Tom Cruise Gives His Honest Review Of Lady Gaga’s New Song For 'Top Gun: Maverick'
By Hugh McIntyre
Kim Kardashian Swears By This £20 Cleanser For Dewy Skin
By Tomi Otekunrin
Lady Gaga Just Relaunched Her Beauty Brand
By Tomi Otekunrin
Alicia Keys’ Keys Soulcare *Finally* Launches Makeup
By Tomi Otekunrin
Get Even More From Bustle — Sign Up For The Newsletter