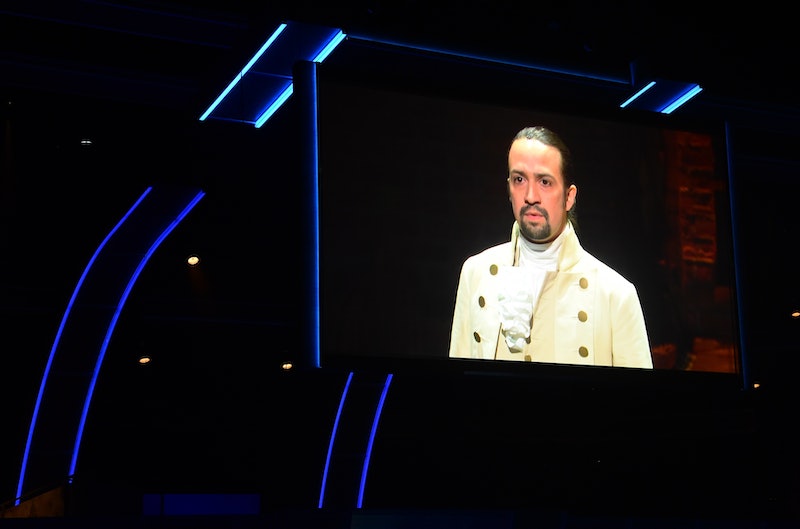 Hamilton already made Grammy history by having the cast perform live from New York City during the 2016 Grammys in Los Angeles. And, while it wasn't shocking that Hamilton took home the award for Best Musical Theater Album later in the evening, Lin-Manuel Miranda surprised the audience by rapping his acceptance speech. I repeat: the man behind the book, music, lyrics, and Alexander Hamilton himself Lin-Manuel Miranda rapped his 2016 Grammys acceptance speech. He earned this Grammy award and made the most of his speech by doing a memorable rap. This can't be said enough.

The Hamilton performance helped prove to non-musical theater fans just how talented Miranda is, and he took it up a level by showing his talents aren't restricted just to the Broadway stage. He appropriately rapped his speech from New York on music's biggest night and adorably ended it by saying, "Daddy's bringing home a Grammy for you" as the camera panned to his wife. Although Grammy viewers everywhere were impressed with Miranda, it should be mentioned that this isn't the first time he has rapped an acceptance speech. He has infamously made this a trend of his throughout the years, including when he accepted Tony awards for In the Heights back in 2008. He even helped Neil Patrick Harris with creating the closing rap for the Tony awards in 2011.

The Daily Show host Trevor Noah appropriately brought up that the Grammys might even need to have a new category for best acceptance speech. And all Broadway fans are just thankful that the Grammys decided to represent this art form and know that Miranda should take credit for creating a crossover hit.

More like this
Jennifer Hudson Becomes An EGOT Winner At The 2022 Tony Awards
By Jake Viswanath
Hugh Jackman & Deborra-Lee Furness’ Relationship Timeline Started With A Mutual Crush
By Hugh McIntyre
The EGOT Winners List: Only These 17 Artists Have Ever Reached EGOT Status
By Radhika Menon and Marina Watts
Just 1 More Award Would Make These Celebrities EGOT Winners
By Hugh McIntyre
Get Even More From Bustle — Sign Up For The Newsletter