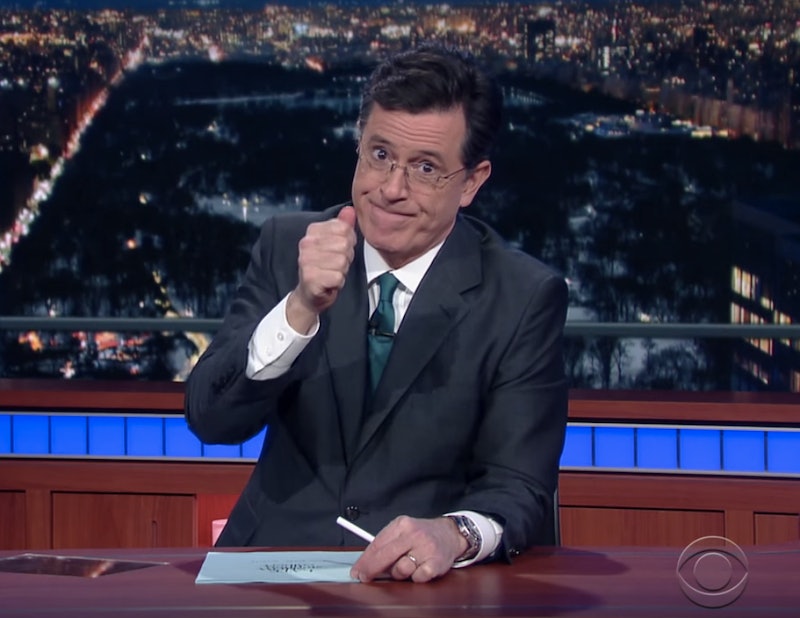 U.S. Supreme Court Justice Antonin Scalia was found dead at age 79 on Saturday at a West Texas ranch, and since his passing, figures like President Obama, Supreme Court Justice Ruth Bader Ginsberg, and Senate Minority Leader Harry Reid have given their condolences and tributes to the man, who was first appointed to the highest court in 1986 by Ronald Reagan. Among the many messages was also Stephen Colbert's tribute to Scalia on The Late Show Monday, which throws you back all the way to 2006.

Colbert was the featured entertainer at the 2006 White House Correspondents' Dinner, where he so graciously welcomed Scalia with historically obscene gestures, including an insulting bite of his thumb. According to Colbert, Scalia actually loved the comedian's sarcastic welcome and made it a point to greet him at the dinner.

...He came up to me — again, no one is talking to me in the whole damn room — and Antonin Scalia comes up to me and says, "It's great, great. Did you give me one of these? (Bites thumb and juts hand out away from his face.)" And I said, "Uh sir, first I wanna ask, would that be legal for me to do?" And he goes, "Of course it would be legal." And I said, "Then yeah, I gave you one of these. (Bites thumb gesture.)" And he goes, "Great stuff, great stuff, good night," and then he left. I watched him go and I said, "Don't make me love you, old man." So I will forever be grateful for that moment of human contact that he gave me, and so I would just like to say, for one last time, Justice Scalia, I salute you. (Bites thumb gesture.)

You can watch Colbert's Scalia shout-out at the 2006 WHCD dinner below.

Over the years, Colbert has not been quiet about his political disagreements with the justice, for instance on issues such as same-sex marriage. In June 2015, when the law was passed to make same-sex marriage legal in all 50 states, Colbert made a video that celebrated the legalization, and also called out Scalia for his conservative views on the matter, mentioning the fact that "History moves fast. It's hard to believe that gays achieved full personhood just five years after corporations did." He also said, "I could've sworn [Scalia] was hiding his head in a flesh-toned cinch sack," before inviting him onto the show.

A fun and humorous memory of their 2006 encounter, Colbert's tribute to Scalia touched on the person behind those heavy Supreme Court decisions. And while they probably didn't agree on much, Colbert and Scalia's respect and appreciation for each other was a two-way street, even when the justice was the butt of his jokes.