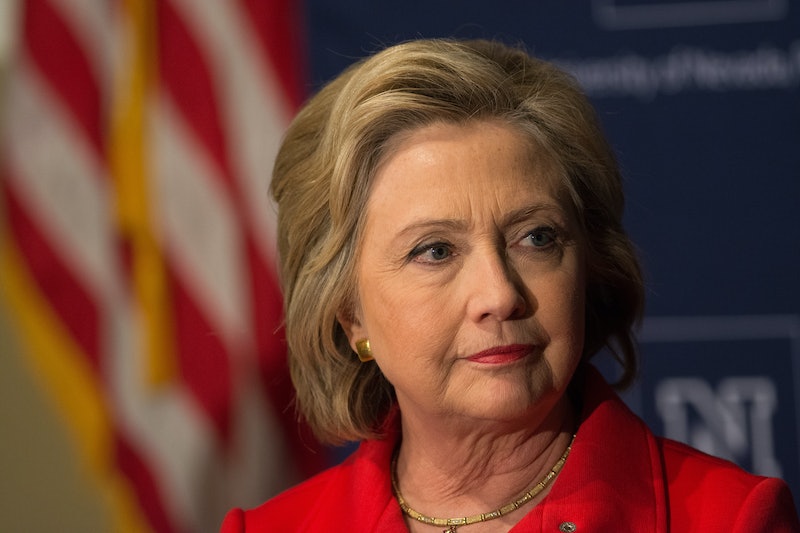 A few folks on Capitol Hill are not liking the prospect of a President Obama nomination for a SCOTUS replacement now that Antonin Scalia's death leaves a spot open on the country's highest court. Senate Majority Leader Mitch McConnell promised to block any prospective appointments put forth by the president before his term expires, and the Kentucky senator has asked fellow Senate Republicans to do the same. But just as McConnell and friends are adamantly vowing to nix any Obama noms, other D.C. players are speaking out on the need for finding a ninth justice in a timely fashion. On Monday evening, former secretary of state and Democratic presidential candidate Hillary Clinton said Obama should nominate Scalia's replacement and called upon the Senate to approve his choice by tweeting up a storm to express all the feels.

Clinton first made her opinion on the matter public on Saturday, stating that McConnell's obvious desire for Obama's successor to nominate a new Supreme Court justice was "totally out of step with our history and our constitutional principle." The leading Democratic candidate apparently wasn't done after a single expression of serious disappointment, though, because Monday night brought on an 11-part series — all signed by "H" — that could only be called, "The Hill Attacking The Hill." Fortunately for Clinton's Twitter followers, every episode in the series was released all at once — just like all the best Netflix original series.

After that first tweet, Clinton just couldn't refrain from an all-out lecture (read: scolding). And who could blame her? Once the highlighted portions of the Constitution come out, there's no going back. That's right. In her first of 11 tweets, the former secretary of state attached an image of Section 2 of the U.S. Constitution with the phrase, "and he shall nominate, and by and with the advice and consent of the Senate, shall appoint ambassadors, other public ministers and consuls, judges of the Supreme Court," accented in blue.

The constitutional references aren't even the real zingers to come out of the Clinton course on SCOTUS. When Clinton's second tweet informs readers that leaving Scalia's Supreme Court spot unfilled has "real and urgent stakes for Americans," anyone would want to know what those stakes are. Simply scroll down and Hill spits some serious truth, informing citizens that abortion rights, executive action on immigration, and the "one person, one vote" principle are all matters awaiting SCOTUS decisions right now.

The crème de la crème of Hillary's Twitter speech, however, is in the numbers. Clinton tweeted that the Senate has never taken more than 125 days to vote on a nominee for the Supreme Court, but nearly a year sits between now and when the next president of the country will take office.

Clinton went beyond her character limits to share all her opinions on a SCOTUS nomination, but she could have accomplished the same in a single message: don't waste the country's time, Senate. Preach.

More like this
'Waterloo Road' Is Back, With More Than A Few Familiar Faces
By Sam Ramsden and Vivian Iroanya
Twitter Can’t Get Enough Of The Romance In 'Ekin-Su & Davide: Homecomings'
By Sophie McEvoy
Twitter Can’t Get Enough Of Lewis Capaldi Creating Fashion Looks For ASOS
By El Hunt
The 'Love, Lizzo' Harry Styles Scene Is Just 1 Moment That Made Fans Feel Seen
By Brad Witter
Get Even More From Bustle — Sign Up For The Newsletter