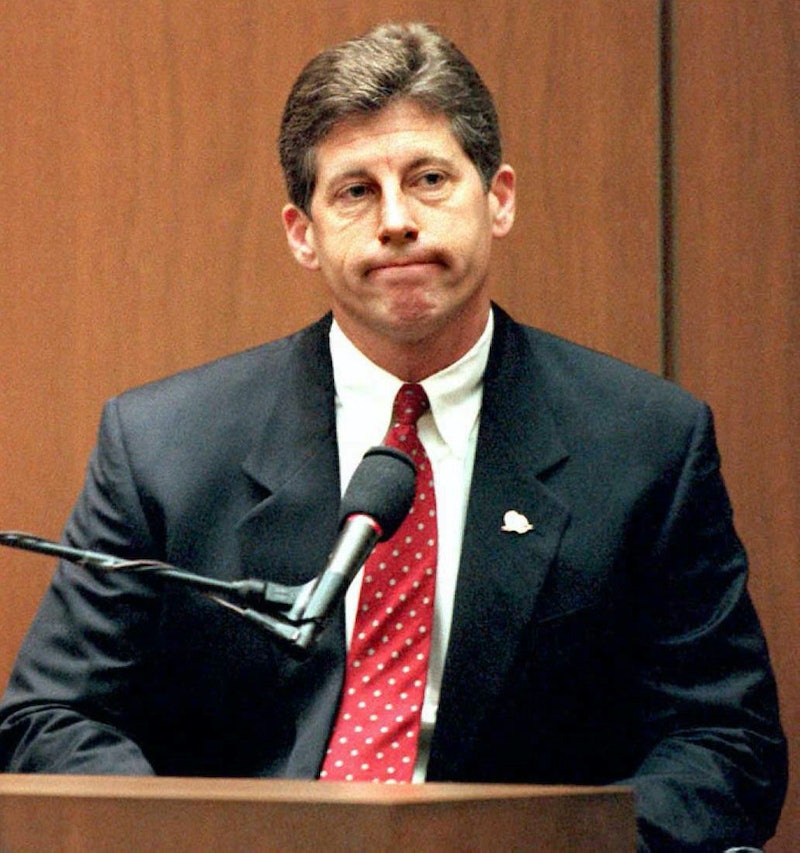 Even though we all know the outcome of the O.J. Simpson trial, Ryan Murphy's new true crime series The People v. O.J. Simpson: American Crime Story is both riveting and addictive. It takes us behind the scenes of what's arguably one of America's most notorious cases and (so far) the series has avoided the pitfall of focusing on the topic of Simpson's guilt or innocence. Following a nearly nine-month-long trial, Simpson was acquitted of the murders of his ex-wife, Nicole Brown Simpson, and Ron Goldman. But, one individual was ultimately convicted of a crime related to the Simpson trial — Detective Mark Fuhrman was convicted of perjury after pleading no contest as a direct result of his testimony, as reported by the Los Angeles Times. As part of their strategy, Simpson's defense team presented evidence that Mark Fuhrman was racist and suggested he had framed Simpson for murder as a result.

Testimony about Fuhrman's views on race was admissible at trial because he was the detective who discovered one of the prosecution's key pieces of evidence — a blood-stained glove on Simpson's property the morning after the murders. It matched a glove that was present at the crime scene and became one of the most hotly contested pieces of evidence, spawning defense attorney Johnnie Cochran's now-famous declaration: "If it doesn't fit, you must acquit." The glove didn't fit and Simpson was ultimately found not guilty.

The evidence against Fuhrman was undeniable, and it left the prosecution in the difficult situation of acknowledging his apparent racism while arguing that it didn't mean the evidence against Simpson was fabricated. When Fuhrman was directly asked if his testimony was true and if he had planted any evidence during the trial, he evoked the fifth amendment, as reported by the LA Times. In his book Murder in Brentwood, published after the trial in 1997, Fuhrman wrote, "I apologize for the pain I caused with my insensitive words. However, one thing I will not apologize for is my policework on the Simpson case. I did a good job; I did nothing wrong." The below testimony pointed directly to the detective's patterns of racist speech and behavior.

As reported by the Chicago Tribune, defense attorney F. Lee Bailey questioned Fuhrman regarding whether or not he had used racial slurs at any point in the 10 years leading up to the Simpson trial. Fuhrman perjured himself when he answered "no" four times — but concrete evidence was presented in the form of audio tapes that had been recorded by screenwriter Laura McKinny:

[I]t was Fuhrman's own voice that contradicted his testimony when a screenwriter later played parts of a tape-recorded interview in which he used the word "n*****" at least 40 times and spewed other racial venom.

A complete transcript of Laura McKinny's testimony can be viewed here. According to a 2014 interview with the New York Daily News, Fuhrman said that his comments to McKinny were "taken out of context." In addition to what are now known as the "Fuhrman Tapes," other witnesses were called to the stand and they testified under oath that Fuhrman used racial epithets on multiple occasions.

During the 1995 trial, The Los Angeles Times detailed Kathleen Bell's testimony. Bell testified that, in the mid-1980s, Fuhrman called interracial marriage "disgusting" and told her that, when he saw a black man and a white woman together in a car, he would pull them over. Bell testified that she asked him what he'd do if the couple wasn't doing anything wrong. She claimed that his response was that "he'd find something."

But, she was even more disturbed by something else Fuhrman allegedly said to her. Bell testified that Fuhrman stated: "If I had my way I'd gather, all the n*****s would be gathered together and burned."

In the same Los Angeles Times article, the testimony of Natalie Singer was outlined. Singer testified that in 1987 Fuhrman told her "The only good n***** is a dead n*****." He also spent time in her apartment because his partner was dating Singer's roommate. She testified that, not only was she shocked by Fuhrman's use of the racial slur, but by "the context the word was used in." The jury did not hear the context because Judge Ito ruled it was not relevant to the Simpson case — but the Los Angeles Times elaborated on the inadmissible context:

Outside the jury's presence, the defense attorney told Ito that Fuhrman had said that day that he liked to beat and kick black suspects, saying that it relieved tension.

Many things are up for debate in the Simpson case, but it was testified at Simpson's trial that Fuhrman had consistently used racial slurs and expressed hatred towards the black community.