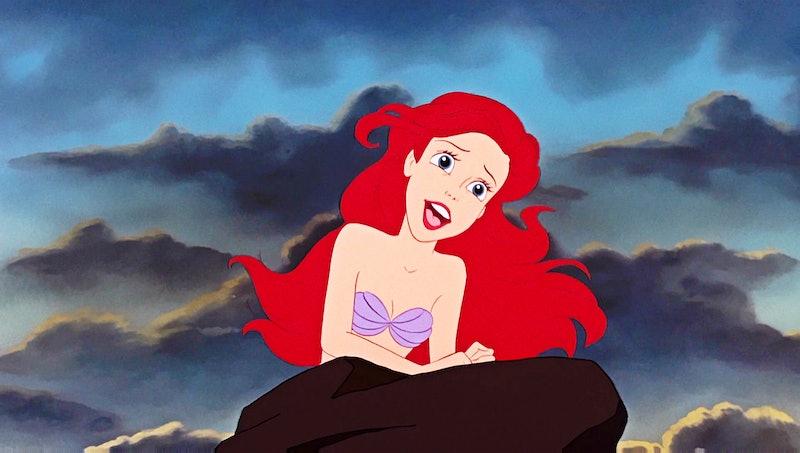 Ariel would willingly give up her siren's song in exchange for the chance to walk on land. In The Little Mermaid, the terms of her deal with the villainous Ursula are clear from the outset. Ursula weaves an enchantment that gives Ariel what she's long fantasized about, and there isn't even a catch: It's a bargain. Ursula tells Ariel that she has three days as a mute human to receive the kiss of Prince Eric, at which point she'll become permanently human, and her voice will be returned. If she fails, she'll return to the ocean and become Ursula's own property. The Little Mermaid plays out over these three days, in which Ursula and her eel compatriots Flotsam and Jetsam attempt to thwart Ariel's quest for love. It's based on Hans Christian Andersen's fairy tale of the same name, but nearly 200 years after it debuted, and nearly 30 years after the film premiered, there's still one thing that will change the way you think about The Little Mermaid .

There's a rarefied canon of female supervillains among the Disney animated slate: the evil queen Maleficent of Sleeping Beauty; Cruella de Ville of 101 Dalmations; the Queen of Hearts who reigns in Alice in Wonderland; and Ursula, the tentacled sea witch of The Little Mermaid. Most of them are portrayed as psychotic, a woman slighted, but only Ursula among them actually legitimizes the power she wields over King Triton's subjects. Like an Iago of the sea, she whispers venomous thoughts into the weak, convincing those who don't quite align with gender norms under the sea that they need her help to conform to their environs. All this went over my six-year-old head upon first viewing The Little Mermaid; but as the role of the female villain, the unlikable woman, in pop culture occupies an increasing territory of thinkpieces and criticism, Ursula's gender seems more relevant today than ever. Ursula knows what Ariel only learns by the film's end: Her voice is more important than her body. Her ability to express herself will bring her more power than her ability to conform to societal pressures.

Ursula is the archetypal "baddie" in The Little Mermaid, yet her bad-ness always has recourse to legal activity. It's contractual evil, and it's entirely constructed through words written and spoken. Fully aware of the terms of their agreement, Ariel signs the contract — while surrounded by the collected souls of those who didn't fulfill their end of the bargain. Those words For all eternity, emblazoned in flourishing cursive across the bottom of the contract, center women in The Little Mermaid. It's a highly specific agreement that pertains only to Ursula and Ariel. Their handwriting marks the surface of the agreement and binds them together. Even King Triton can't interfere in this agreement, which Ursula lords over him as the pathos of the film escalates. "The contract's legal, binding, and completely unbreakable — even for you," she points out. King Triton operates within a specific patriarchal norm, in which the fact of his man-ness gives him particular power over his subjects, his daughter included. Ursula exists on the margins of the mer-people society, but her power supersedes that society's structure because her victims are complicit in it. They're really the victims of their own signatures.

Ursula contrasts with Ariel's demure propriety — when her father tells her to obey his word, he successfully silences her — with her unabashed sexuality. (As a BuzzFeed reporter noted of Ariel's relationship with her father, "Had Ursula not been waiting disruptively in the background, there would be no negotiation of his terms.") "It's she who holds her tongue who gets her man," Ursula sings in "Poor Unfortunate Souls." She doesn't offer this as advice, though; Ursula refuses to be silenced. Even further, she expands her voice by stealing the songs of those who think their bodies more important than their mode of expression. When Ariel signs away her voice, she unwittingly signs away her power. Ursula transforms into a beautiful human rival to the mute Ariel in an effort to win Prince Eric away from the mer-princess, and it's her siren song that attracts him even more than her good looks. The woman who doesn't keep her silence threatens to come out on top.

Ursula is the fallen one at the beginning of The Little Mermaid, but she tumbles further by its end. Prince Eric spears her on the bow of his ship, a gruesome end for a truly insidious character. This is a Disney princess movie, after all — the baddie can't get away with it. But Ariel's triumph only underlines what was so subversive about Ursula the villainess when she debuted in 1989 — it's only when Ariel reclaims her voice that she's able to triumph. Even 30 years later, popular culture struggles to find a place for the unlikable woman (part of the appeal of The Good Wife and Jessica Jones is their persistent anti-heroines), yet Disney placed her front-and-center in its 1989 masterpiece. The Little Mermaid's female protagonist and antagonist engage in a battle of the wits that prioritizes communication. It's the woman who refuses to be silenced, rather than the one who mutely accepts her blows, that will win the man — and the power.