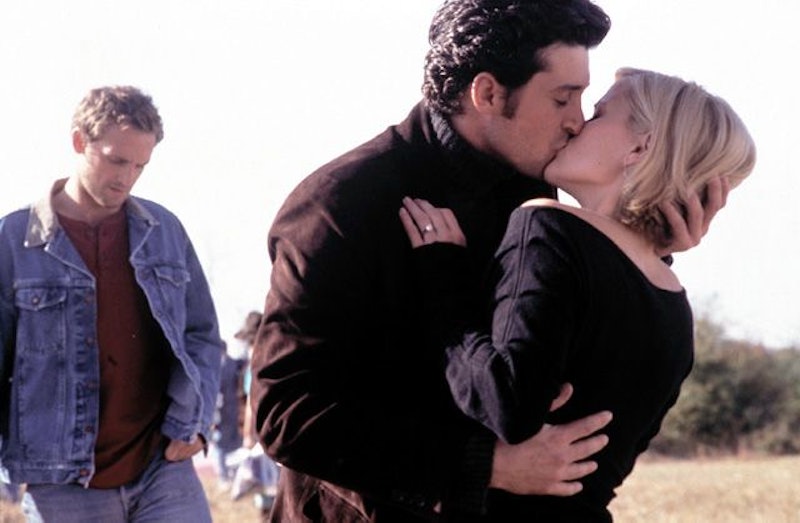 In my eyes, Sweet Home Alabama is a classic. Not only is Reese Witherspoon amazing in it, it stars other hotties like Patrick Dempsey and Josh Lucas. What more could you want from a romantic comedy? However, much like other movies I loved in my youth, there are aspects of Sweet Home Alabama that I find uncomfortable now. And before you try to remind me that rom-coms aren't real life (which I know), I think it's important that romantic movies aimed at women don't perpetuate unhelpful and unrealistic myths about relationships. I'm sorry if I'm breaking your heart here, but this one thing will change how you feel about Sweet Home Alabama forever.

Witherspoon plays Melanie, a successful fashion designer who's based in New York and engaged to McDreamy. There are only two hitches. His mother hates her, and Melanie's ex-husband hasn't signed the divorce papers. Which is why Witherspoon must make the trip back home to get the documents signed, so she can move on with her life. While this might sound like a typical set-up for a rom-com, there's something sinister at play, and, when you dwell too hard on Sweet Home Alabama, it's actually sending a super confusing and anti-feminist message about love, marriage, the careers of women, and divorce.

From an outsider's perspective, Reese Witherspoon's character appears to be incredibly successful and talented and unafraid of the fact that she's a self-made woman. But the people from her past don't see her that way. In fact, from the second she returns home, she is shamed by her friends and family for never visiting, for leaving her husband, and running away, as they see it. Even though none of them have ever tried to visit her in the city (she sent her parents a paid-for plane ticket which they never bothered to use), Melanie is firmly painted as in the wrong. She left the place she grew up to pursue a career, and how dare she!

Family is important, but there's something so awful about loved ones not caring at all about Melanie's success. Instead of being proud, the complaints circle around the fact that Melanie left. And leaving, it seems, is an act of evil. But Melanie moved on, and, in a fierce act of feminism, left an unhappy marriage and started a new life, and career, for herself in New York. So why does everyone in Sweet Home Alabama have to be such a hater?

While Witherspoon's character probably should've visited her friends and family now and again, the fault shouldn't all rest with her. As for her marriage to the beautiful Jake (played by Josh Lucas, swoon), they fought all the time, and it got so bad that Melanie fled to a different place. She did what she had to do at the time, and doesn't deserve the grief she's dealt for this. Which is what makes the film's resolution and takeaway message so worrying.

I understand that some people meet as kids and stay together forever. There's also nothing wrong with getting back together with an ex if that feels like the right thing to do. What changes the way I think about Sweet Home Alabama, however, is the insinuation that Melanie doesn't know her own mind. And the fact that her ex won't sign the divorce papers after the longest time, even though she basically begs him on multiple occasions, isn't really romantic, but, OK, sure, they get back together, so I guess it's fine.

Relationships and marriage can be tricky to navigate, but we don't need stories in which women are continually faulted for making bold choices, and for wanting to move on with their lives. There's no rule book that says you have to stay with one person forever, but, when someone doesn't listen to the very clear questions you're asking them, alarm bells should start ringing. If a person brings out the worst in you, even if you can't stay away from them, you probably shouldn't be together.

Sweet Home Alabama is still one of my favorite movies, and I watched it religiously when it came out. But, when the plot is examined with a more critical eye, it's important to remember to not let anyone make you feel anything less than awesome. That your achievements aren't trash, and to kick anyone to the curb that tries to tell you otherwise.

And get those divorce papers filed. Just sayin'.