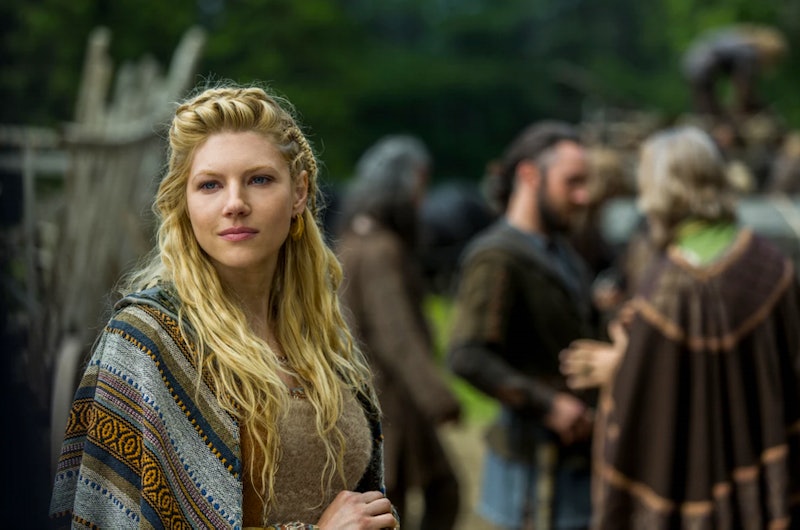 History's epic, scripted drama Vikings follows the life of the mythical Norseman Ragnar Lodbrok, but when it comes to folk tales, Viking or otherwise, it can be difficult to tell what exactly is fact and what is fiction. Add Hollywood magic, and it is even harder to discern truth from legend. So, how historically accurate is Vikings?

The series focuses on the Viking first family headed by Ragnar, and has flourished due to its heart-pounding storylines, interesting female characters, and fashion. But how much of all this is accurate? Here are nine facts to set the record straight on Vikings.

While fans have been a little obsessed with the braids featured on Vikings in the past, it should be noted that they are in fact accurate — as well as fabulous — according to History and hair designer for the show, Dee Corcoran. In a featurette posted on History's website, Corcoran says that her inspiration for some of the hairstyles were photos she found of the time in a reference book.

The eyeliner featured on the series is also accurate. According to Academie Duello, Viking men and women wore “dark-colored powder made of crushed antimony, burnt almonds, lead, oxidized copper, ochre, ash, malachite, and chrysocolla” to help protect their vision from the sun’s glare. Plus, you know, it looked really cool. Gareth Williams, who curated an exhibit on vikings at the British Museum, also told Mirror that men " used a kohl-like eyeliner."

3. The Saga Of Ragnar Lodbrok

Yes, there is a Norse saga about Ragnar's life, adventures, and progeny. However, these are not historical texts. Dr. Shannon Godlove, assistant professor of English and the coordinator of Columbus State University's Medieval and Renaissance Studies Certificate Program, told PopSugar that these accounts were oral history and legends of the time that paralleled historic events. While the show may often stick close to the saga, the story itself is not fully accurate.

According to PopSugar, “shieldmaidens” weren’t a real Norse title, though there were warrior women in myth and legend. We also know that Viking women did have autonomy and did not sit out battles.

According to PopSugar, the show speeds up time and compresses events in order to bring the myths to life on the small screen. The article sites the monastery raid in Season 1 as taking place is 793 AD, while the Season 3 raid on Paris was in 911 AD.

The mythical Norseman is said to have fathered sons who are also important figures, like Ivar the Boneless, Halfdan, and Ubba, according to Encyclopedia Britannica. Vikings writer Michael Hirst, also known for Elizabeth: The Golden Age and The Tudors, said in an interview with History Answers that he focused on Ragnar because he was a Viking chieftain, interesting in his own right, and also gave the series the opportunity to show a dynasty.

His sons, including the wonderfully named Ivar the boneless, became more famous than he was. It gave me the opportunity to write about a dynasty and to continue to explore for however long History or MGM want to continue this saga. We can go on through the sons. Bjorn his oldest son sailed around the Mediterranean, they colonized Iceland and went to Greenland.

According to Godlove’s PopSugar interview, this was her biggest WTF moment towards Vikings. She told the website, “Anglo-Saxons did not crucify people, and I guarantee you that they would have seen crucifying an apostate as blasphemy.”

In his All About History interview, Hirst set the record straight about Viking brutality. He said:

People said it wasn’t really possible to write a series about Vikings because they were so nasty, that they were brutish and just pillaged and raped everyone. But the more I read and understood the more I realized that this was a rich and wonderful culture that had been stigmatized by their enemies, the Christian monks who had an axe to grind against them. I just fell in love with their paganism and how democratic they were compared to other societies.

Despite most depictions of vikings, it seems that they likely did not actually wear horned helmets, according to History. Because there were no horned helmets. But thanks to Vikings, we know that's a good thing, because they were rocking some seriously awesome hairstyles that deserve to be shown off.

This article was originally published on Feb. 18, 2016