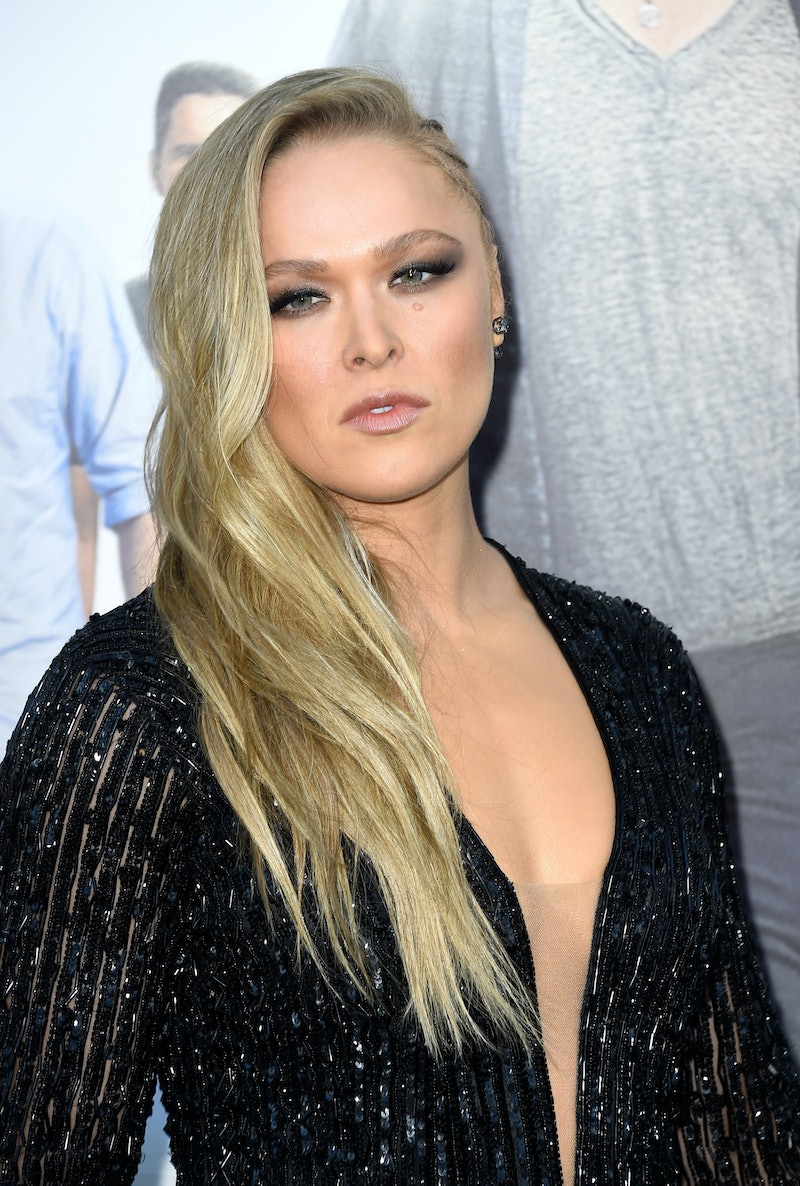 When you're at the top of your game professionally, as Ronda Rousey was when she competed against Holly Holm in the bantamweight championship fight at UFC 193, it's obvious why losing can feel like such a failure. After all, the higher you are, the harder it can feel to fall. At the time of the loss, Rousey was quite literally the best UFC fighter in the world, even called the Best Female Athlete Ever by ESPN. Getting to that caliber of success is no accident: Rousey worked hard to accrue those titles and secure her spot among MMA heavyweight champions. So when she lost her bantamweight championship title to Holm in November, it's not surprising she'd be pretty bummed out, to say the least. But Rousey just revealed a surprising confession about her state of mind after losing the title, and it's quite startling.

In her first post-fight interview on The Ellen DeGeneres Show, Rousey speaks candidly about how she really felt in the comedown after her loss to Holm. When DeGeneres asked Rousey about how she felt, the athlete got emotional and revealed:

I was literally sitting there and thinking about killing myself and that exact second I'm like "I'm nothing, what do I do anymore and no one gives a sh*t about me anymore without this." To be honest, I looked up and I saw my man Travis was standing up there and I looked up at him and I was like, I need to have his babies. I need to stay alive. ... I don't know if I would have made it without him.

Of course, even with the loss, Rousey is still celebrated for all of her talent and determination both in the ring and outside of it, so it's hard to hear that she struggled with such painful thoughts in the immediate aftermath of the fight. But DeGeneres puts a positive spin on it, telling Rousey,

That breaks my heart to hear. Anybody looking at you, you're such a brave woman in so many ways and so obviously strong physically and mentally to do what you do, so to hear you say that is actually a really great thing because there are a lot of people out there who have thoughts like that and they're looking at you and going, "wow, if she's having thoughts like that..." so you just did a lot of good for a lot of people. Thank you for saying that.

Rousey began dating her boyfriend, fellow UFC fighter Travis Browne, last summer, and he had nothing but sweet things to say about her in an October interview on The MMA Hour . He said,

I've gotten to know her through the gym, through all that kind of stuff. I see her for who she is. The fact that she's out there winning ESPYS and the star she is on the movie screen and all that kind of stuff, that's all great. But that's not who I know her as, if that makes sense. I know her as one of the hardest working athletes that I've ever seen, in this gym busting her butt on a daily basis. And through our own personal experiences of how compassionate and really how much of a sweetheart she really is. That's what a lot of people don't see out of her. They see that, but they don't really get to experience that. ... She's a huge star and that's great for her and I'm happy for her. I want nothing to do but support that aspect in her life.

Rousey's courageous admission about such tough time is what the world needs to hear, if only to make someone else going through a similar struggle feel a little less alone. Her career is obviously one of the reasons people pay attention to her, but it's her ability to keep it real and speak honestly with her fans that makes her such a great role model for anyone, not just MMA fans. Losing a championship like that would be hard for any professional athlete to handle, but Rousey's spirit is what makes her so inspiring.

UFC President Dana White came to Rousey's defense in the wake of her confession, telling TMZ Sports, "Trust me, she's good right now and in a great place. Winners don't like to lose." He also added that she's "amazing in every single way" and that he's "never worked with an athlete like her."

With all that support behind her, I can only hope Rousey knows just how loved and respected she is.