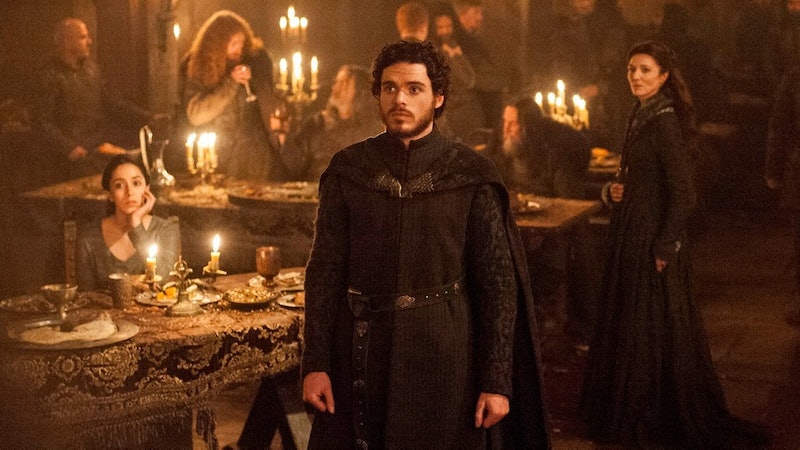 If there has been one thing we can all agree about a certain HBO show, it's that there have been some heartbreaking Game of Thrones moments that have shaken viewers to their very core. Whether it's watching many of the characters be sexually victimized, or maybe only slaughtered, or getting forced into doing horrible things for their own survival, the events that take place in GoT often require a nice bowl of ice cream followed by a glass of wine enjoyed while rocking back and forth in the fetal position. There have been so many episodes that made the collective viewership feel slightly off afterwards that it's almost a wonder we keep coming back for more death, pain, and heartbreak.

There are many heartbreaking moments, but who wins the crown of worst moment? Which moment is not quite as horrid, so upon a re-watch there at least aren't nightmares of Jon Snow's bleeding out dancing in our heads Sugarplum-style? The following are 13 of the most heartbreaking GoT moments, ranked from tragic to heart-wrenching to mildly disturbing and everything in between. If you break down and start sobbing in the middle of reading the list, don't worry. You won't be judged because we all understand those feels. We've all been there.

So this is at the bottom of the list, because we are all kind of upset with Jorah for being a spy so we understand why Danaerys had to let him have it. But we're still all sad and stuff because he really loves her and respects her now. Who hasn't been touched by unrequited love? It's tough stuff.

Part of me (the insane part) was like "he's mine, all mine!," but the other (slightly more sane part) was heartbroken for poor Jon and his dead love. Sure, they weren't fighting on the same side, but that only seemed to make their passion stronger.

11. When Cersei Got Shamed

This was heartbreaking. No one deserves to get rotten fruit thrown at their naked bodies, but, at the same time, there was a horrible sense of schadenfreude coming from me. I'm still not sure how to properly process this.

Sure, worse things have happened to Sansa. But when Littlefinger, who was at the time the only guy she trusted, put the moves on Sansa, it hurt my heart so much. Poor Sansa can't trust anybody, and things are just always getting worse for her.

Watching animals get told they are not wanted on television is, for some reason, so much worse than watching people die. I'm not certain why, or if that makes me a sociopath. This gets a low ranking because I'm sure everybody else doesn't get the sads as much as I do about this event. But geez, poor Nymeria. Poor Arya.

8. When Jaime's Hand Was Cut Off

Sure, this Lannister still has a lot of redemption to pull off before I ever quite forgive him, but, when he lost his sword-hand, I felt for him. Jaimie was the braun of the operation and that's all he knew how to do. His entire way of life went out the window at this moment.

We trusted you, Shae! We trusted you! Tyrion's got the short end of the Lannister stick and being betrayed by the woman he loved was just too much for me. He really loved her, and all he gets for it is a cheating girlfriend, more suspicion that he's the guy who killed Joffrey, and a dead father.

6. When Shireen Was Burned At The Stake

If GoT has taught us anything, it's that they really know how to make us feel the pain of parents watching their children die. Watching your daughter burn at the stake doesn't seem like the best way to spend an afternoon. Even if it's as a sacrifice to whatever god you're into.

Danaerys sacrificed everything to save her hubby and it turned him into a lifeless shell. The mercy kill she committed gave me nightmares. But, on the bright side, it led to some cool stuff, like baby dragons and Daenerys becoming a huge badass.

4. When Bran Got Pushed Out The Window

The one that started it all. Watching this poor little boy be pushed from the castle window really set the tone for all the tragedy that would later be revealed to us. It makes it to the top of the list for being one of the first rounds of violence we saw in GoT.

3. When The Night's Watch Mutinied

This one's still got me like WTF. But he's probably not dead right? Yeah. He's not dead. He's fine. Probably.

This is an oldie, but a goodie, I guess. The Starks are some of my favorite characters, abnd this was our first glimpse into how much death was going to go down in the rest of the series. Before that, we were all so innocent.

If watching all those people get murdered wasn't bad enough, watching the devastation on Catelyn Stark's face right before she gets murdered herself, when she realized her last surviving son (so she thinks) was dead, and his wife, and his unborn child, was insanely difficult to handle. This one takes the lead due to body count and insane morbidity.

You can say a lot about Game of Thrones, but you can't say the series isn't generous with misery. And yet, we come back, and we watch more of the horror each season, because the show is just too good. April is coming, and soon we will have a whole new list of horror to add to the ranking.