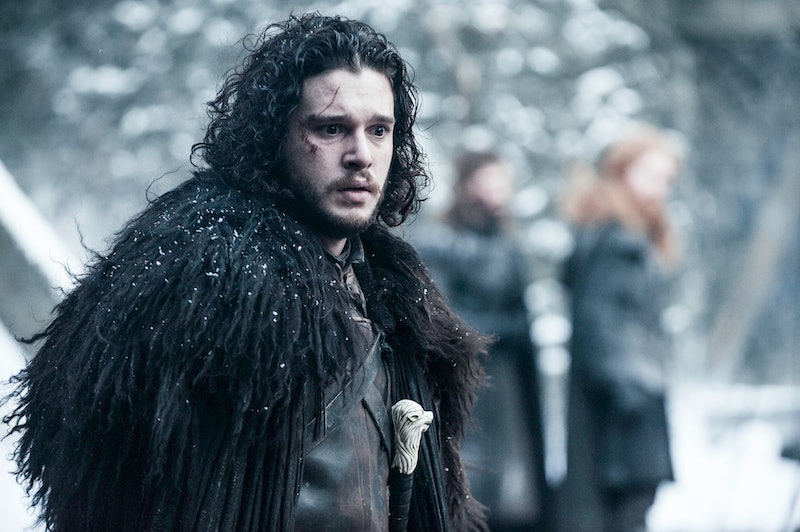 Nope. I won't say it. I won't acknowledge it: Jon Snow is not dead. Sure, I could keep trying to trot out all my Jon Snow resurrection theories. I could do my best to ward off the folks who think they're so much smarter than those of us who just can't get over the most honorable man in Westeros. We're not dumb, guys. We're just as committed to finding the goodness in this world as say, one Night's Watch leader who just got stabbed six times. But because the theories and the emotional knowledge we all hold within our hearts just isn't enough, I (along with fellow Bustle editors Kate Ward, Tanya Ghahremani, and Christine DiStasio) present this completely irrefutable list of 74 very practical reasons Jon Snow will come back to us.

And no, none of them are outlandish, over emotional, or weird. You are.

1. I cried at my desk this morning because I miss him.

3. I saw someone walking a husky on my way to work.

4. I’m pretty sure said husky smiled at me.

5. Winter is coming… through the air vents at my office.

6. No seriously. In what world can it be this cold AND Jon Snow is dead? No world. That’s where.

7. Because a rando on reddit says he’s secretly filming in Belfast.

8. And I will believe literally anything that soothes my grief.

9. Kit Harington’s hair is not that short.

11. I swear I heard his name on the wind the other day.

12. My co-worker took a picture with Kit Harington at a party.

15. Because Kit has been way too blunt in interviews and I KNOW HE CARES ABOUT OUR FEELINGS.

16. Because it’s the only way I can physically bring myself to sit in front of the television for further Game of Thrones episodes.

17. Seriously, there are no eligible bachelors left in Westeros... not chill.

18. Because Kit Harington as Jon Snow is the truest definition of a cinnamon roll, thus must live for ever.

19. Kit once admitted that he knows nothing.

20. Because I will boycott any movie that takes him away from returning to HBO. COME AT ME, HOLLYWOOD.

22. Because we’re all too cynical to believe an actor tells the truth about anything. ever.

23. Because the only person better at torture than Ramsay Bolton is George R.R. Martin. Of course he would “kill” Jon off.

25. Because we know nothing.

26. Because Kit still has the beard.

27. Because this show can’t be that cruel, can it?

29. No one else is left to give Sansa epic hair care tips.

30. Because there’s still some good left in the world.

32. Because I thought I saw him on the street the other day but when I yelled out his name it wasn’t him. Still a sign, though.

33. Because in what world does it make sense that someone who has killed two White Walkers, including a big ol scraggly one, was killed by freaking Olly?

34. Because NOTHING IS REAL.

35. The episode was obviously a dream, a la Dallas. #TVscience

36. Because I’m having trouble sleeping because I keep wondering what I could have done differently to change Jon’s fate.

37. Because there are so many possibilities for him to come back, it would be silly for the show not to utilize at least one.

38. Because killing off Starks is getting old.

39. Because he doesn’t have any new projects listed on his IMDB yet.

40. Because this person does not agree with the Season 5 ending.

41. I’m pretty sure this character death is giving me an ulcer and HBO doesn't want that guilt on their hands, do they?

43. The sign at my favorite coffee shop says Jon Snow likes cold brew. How could he like cold brew if he’s dead? RIDDLE ME THAT.

44. Because I can't afford the therapy I'd need to deal with Jon actually dying.

45. Because taking Jon to the White Walker battle was way too expensive of a scene to create if it doesn’t hint at his resurrection.

46. Also, stories don’t work this way. You don’t spend this much time on a character only have him die after some losers stab him while whispering like yellow-bellied cowards who ambushed the only good thing that ever happened to them.

48. Because it was kind of cold in my apartment this morning and it’s summer which means something about White Walkers, right?

49. Because I would considering bribing GRRM with my entire year’s salary to bring Jon back.

50. Because I may or may not have already written the fan letter that promises this.

51. Because a Stark family reunion can’t only happen in heaven.

53. Because the way these guys have to layer on all that leather for the cold, the wounds couldn’t have punctured too deep, right? Go ahead and poke holes in that, Internet.

54. Seriously. If Jake Ballard can survive like a thousand stab wounds from a PROFESSIONAL ASSASSIN while wearing a T-SHIRT on Scandal — in a world where magic is not a thing — then Jon Snow could survive six stab wounds from some dudes on the Watch.

55. Because Melisandre wouldn’t let him die before tapping that.

56. Because how could anyone just waste a romance like this?

57. Because Sam can’t kill all the White Walkers himself.

58. Because Jon has to live long enough to give the IKEA monkey his coat.

59. Because it’s just cruel to make us hate ANOTHER kid on this show.

60. It’s also cruel to make me choose between hating Joffrey or that kid Olly more. That’s like asking a parent to choose which child they love more. But somehow worse.

61. Because I’m choosing to believe that “if you love something, set it free” applies here.

62. Because Jon's too good at sticking with the pointy end. (WINK WINK)

63. Because Ghost owes Jon one.

64. Because Jon Snow has to live to get his own spinoff show, which will basically be one long commercial for Herbal Essences. (Alternatively, a web series titled Jon Snow Is 30… And Knows Nothing.)

65. Because characters on other shows have come back under circumstances that seemed more dire than just being stabbed a bunch of times.

66. Because a doctor didn’t pronounce him dead, so there’s still hope.

68. Because GRRM wouldn’t let this person who got a Jon Snow tattoo down:

69. Because even if he is really dead on the show, he’s my chat icon, so I will keep him alive myself if I have to. dammit.

70. He can’t die, because he hasn’t started dating me yet.

71. Also, I thought I saw his face burnt into my gluten-free toast this morning.

72. My computer just autocorrected "white" to "wight," so clearly it has some ideas about Jon Snow too and computers are never wrong.

73. Because his eyes sort of maybe changed color and no it wasn’t a reflection it means something shut up.