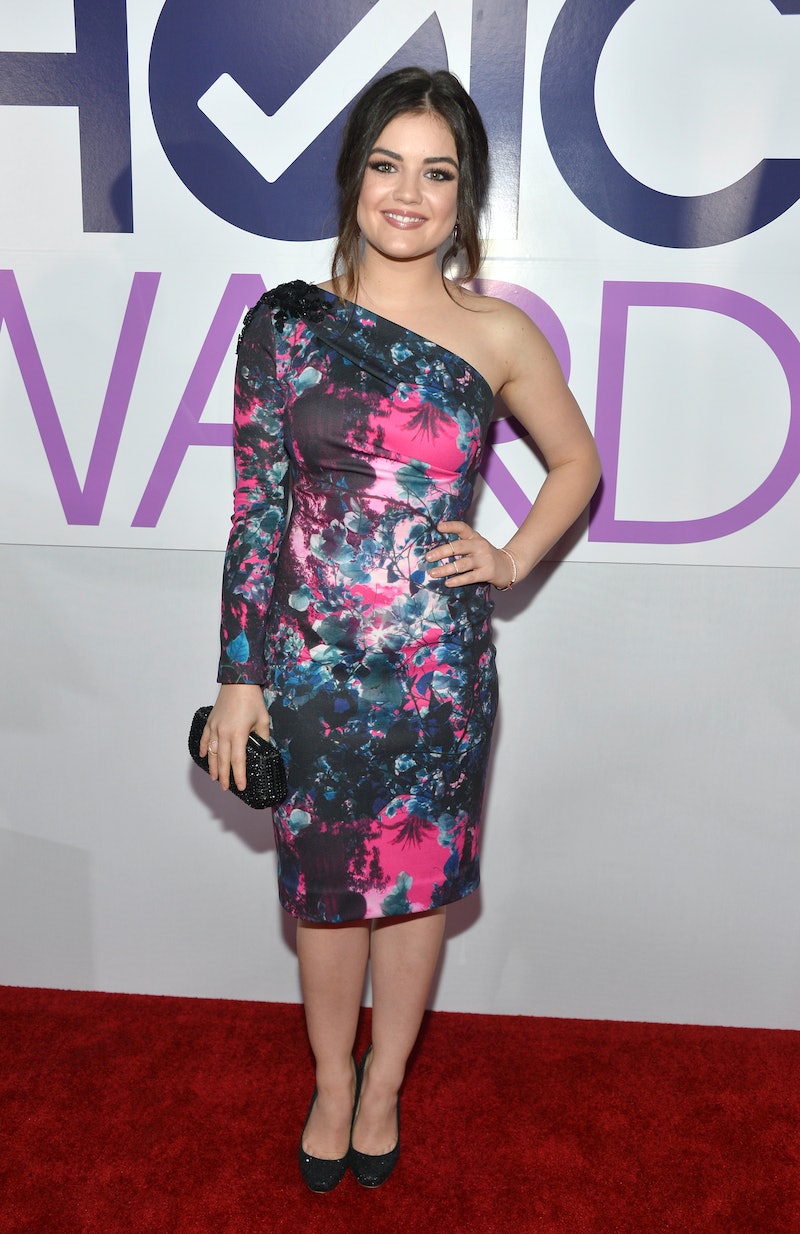 Fans of ABC Family's Pretty Little Liars have always had their own theories about who the series antagonist "A" could be — that will happen when you make them wait way too long for answers. And according to Lucy Hale, who plays liar Aria Montgomery, the show's fans think Hale might be the ever-elusive "A." We're not surprised that this theory is circulating the Internet, considering it wouldn't be beneath PLL to rip the rug out from under everyone (Ezra is "Board Shorts"?!), and there's definitely evidence to support it but would it be the best thing for the ABC Family series to go that far? We're not so sure.

"Aria is 'A'" isn't the only "A" fan theory floating around, but it's definitely got a lot of steam behind it. So much steam, in fact, that MTV News asked Hale about her thoughts on the possibility earlier this week. The actress, who recently launched a country music career with her single "You Sound Good To Me", told MTV that she isn't necessarily convinced that she's playing "A", but she wouldn't rule the idea out entirely. Hale said about the theories:

There's a whole following of, like, underground following that thinks that Aria could be the ultimate 'A.' And they have, like, some pretty good theories. I'm always constantly impressed. I mean, mainly because Aria is kind of always missing in action, but I mean her excuse is that she's always with Ezra. You know? But if you notice in a lot of the episodes there will be the three girls and it's like, 'Well, where the heck is Aria? Like, where is she?' Yeah there are a lot of people that think that.

Now that we really think about it, Aria is conveniently MIA pretty often and it definitely would explain Ezra playing minion (if he is, in fact, playing a minion — which is still undetermined). But would it be too good to be true? And is Aria that much of a sociopath that she'd fill her mother's car with bees and repeatedly try to hurt her friends and their families? We're not so sure that she's that good at pretending.

We're also not entirely sure that it's accurate to say that she's managed to escape from the "A" situations that she's been in unscathed just because she's the ringleader. (Remember when she got locked in that pine box on the Halloween Train with dead Garrett in season three?) Aria might be getting the easier end of the deal because Ezra's taken an interest in her but, again, these things are all still uncertain — Damn you, PLL, for making it so hard to put together the pieces.

But let's just say that Aria's been at it this whole time — "A"'s torment did start when she came back to town and the group reunited, after all. Would it even be satisfying to have PLL throw that huge bombshell in our faces? It'd be too good to be true to have their torturer be one of their own. There's been such a huge hype around "A" and there are so many minions running around doing their bidding. Don't you think it'd be kind of a let down for them to just announce that Aria's been the ringleader and hiding in plain sight this whole time? We think so and if that's the case, then what? They'd ship Aria off to Radley for being the ultimate psychopath and everyone would live happily ever after — that is so not PLL.

Fan sites have made it their focus to hone in on potential clues in Aria's scenes to further prove the theory — including Mona's anagram "Aria You're A Killer, Not Ezra's Wife" and the fact that she likes tea (and so does "A"). But, from someone who's been obsessed with getting the bejesus scared out of them week after week by this show, it wouldn't be a satisfying ending to "A"'s reign of terror if it ended up being Aria.

The evidence is there and for Aria playing the ultimate villain, but let's not forget how much evidence there was for Ezra being "A" — and now it looks like he might just be "Board Shorts" and nothing else. It's a great theory and it could work if she turned out to be another minion like Mona, Toby, and Ezra but it'd just be ridiculous and difficult to pull off and even harder to believe her as the ultimate "A".

(Even though looking at this clip from the show's opening creeps me out now. Why is Aria the one shushing us? Ugh.)