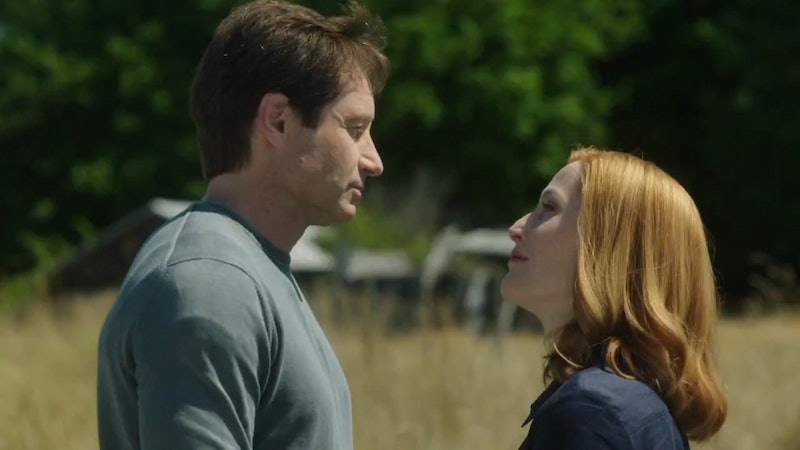 To say it's been a, well, interesting journey when it comes to the X-Files reboot mini-series would be a serious understatement. I'd been ambivalent about the possibility of reuniting with Mulder and Scully again after all these years. On one hand, there was little chance that the show would be able to capture its original magic more than a decade later; on the other hand, my desperate attachment to and love for Mulder and Scully — or Fox and Dana, as they were so awkwardly called here and there throughout the new eps, sometimes by each other (yikes!) — meant I was on board no matter how bad of an idea it all was. Now, as we approach the X-Files season finale, "My Struggle II", I'm starting to wonder if there'll ever be any more new episodes, or if Chris Carter and Co. will finally hang up their hats and let these characters live on where they're meant to: on DVD and in fanfic.

"My Struggle II" returns to the mytharc, that sometimes wearisome beast, where Joel McHale is kicking up some trouble about (yet another) government conspiracy involving alien DNA, worldwide health epidemics, UFO crash landings, Cigarette Smoking Man, and that pesky mini Mulder and Scully that are totally unnecessary and an insult to Lauren Ambrose's glory days on Six Feet Under. I'm feeling a bit exhausted just watching the trailer, which doesn't bode well for the actual episode. After all, haven't we seen all this before? Don't we know that the government lies, that you can trust no one? Where's the new information, here?

It's hard to imagine, after seeing this, that the possibility of future seasons is a thing. And yet, I don't think anyone in the cast or crew would necessarily be against another mini-series if the budget and the demand was there (and given the new series' performance in the ratings, shockingly, it is still there). But even from the very first episode, it felt like we were being hit over the head with ideas we became all too familiar with roughly 15 to 20 years ago, ideas which seem outdated and pretty much a given these days rather than anything revolutionary. Yes, the government lies. Yes, aliens have been here and there have been cover-ups.The world is a dangerous place to live and so on and so forth. Not exactly new information.

The new X-Files miniseries has relied on one very important element to ensure its success: nostalgia. We all loved Mulder and Scully so much during the '90s — so strongly, in fact, that it's stayed with us nearly two decades later. Because of that, the chance to reunite with characters we spent so much time with during that era of our lives is overwhelmingly attractive, even if the execution leaves a bit to be desired. At this point, I think it'd be better if we let Mulder and Scully — who, it's clear to me from all that googly-eyed, hand-holdy business at the end of an otherwise disastrous "Babylon" are well on their way to being back together as a proper couple — live in peace in their rickety house in the middle of nowhere, preserved in a plethora of good memories. To bring them back again after this just seems cruel both to them and the audience. I never thought I'd say this, but I think it's time for the X-Files to be closed.

More like this
Here’s Who Victor Chooses In The ‘Love, Victor’ Season 3 Finale
By Brad Witter
An 'Emily In Paris' Fave Is Joining Season 5 Of 'The Crown'
By Bustle Editors
Who Could Die In The Stranger Things Season 4 Finale?
By Kadin Burnett
'Stranger Things' Season 4 Volume 2 Trailer Teases New Episodes Coming July 1
By Grace Wehniainen and Gabrielle Bondi
Get Even More From Bustle — Sign Up For The Newsletter