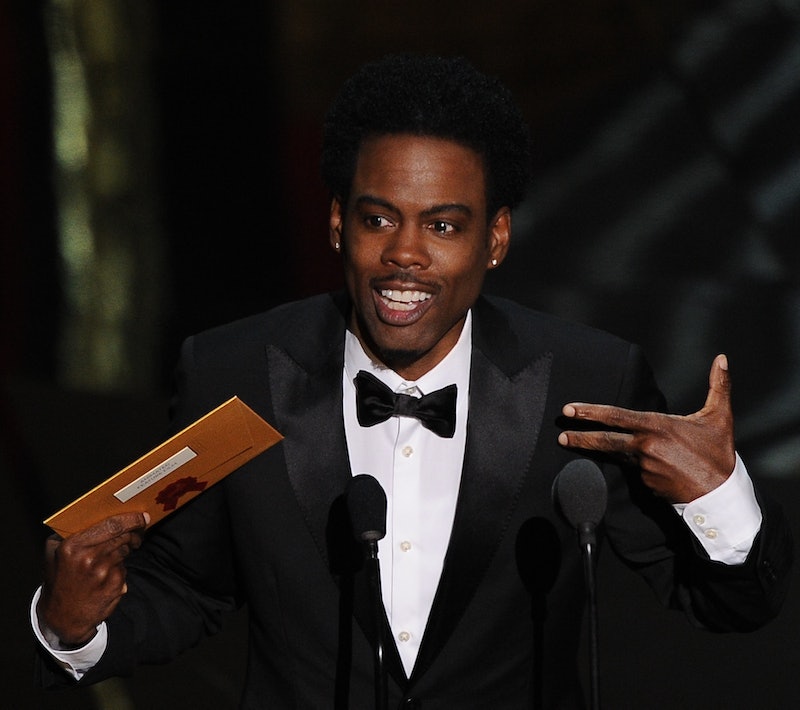 There's a lot you should be paying attention to during the 2016 Academy Awards, from Leonardo DiCaprio's seemingly inevitable win for Best Actor to the heated races over Best Screenplay and Best Picture. Yet while there's a lot at stake in those categories, what you really should be paying attention to is the man leading the ceremony. Chris Rock is returning to host this year's show, and, despite many calls for him to boycott the Oscars this year due to the #OscarsSoWhite controversy, Rock is set to hit the stage come Feb. 28. And, frankly, Rock hosting is one thing the Oscars got majorly right this year.

When Rock first hosted the Oscars in 2005, he opened with this joke: "It's a great night tonight. We have four black nominees tonight. So great! It's kinda like the Def Oscar Jam tonight." (2005, you'll remember, was the year of Million Dollar Baby and Ray.) He didn't stop there; the show aired right after President George W. Bush's reelection, and the comedian did not back down from making political jokes. Not only did he poke fun at Bush, he also took aim at the Iraq War, making the audience laugh. I can only imagine what Rock's opening joke will be when he takes the stage this year.

In the 11 years since Rock's debut, few Academy Awards hosts have kept up his habit of poking fun at current events. It's true that Jon Stewart hosted twice after Rock — once in 2006 and again in 2008 — but his monologues were noticeably less politicized than his predecessor's. Other hosts — Ellen DeGeneres, Hugh Jackman, Steve Martin and Alec Baldwin, James Franco and Anne Hathaway, Billy Crystal, Seth MacFarlane, and, finally, Neil Patrick Harris — were all pretty vanilla in comparison. Sure, there were a few controversies — Franco being a complete waste of Oscar space and MacFarlane's ill-conceived "We Saw Your Boobs" certainly stand out — but for the most part, the hosts' monologues have been pretty benign, and they have certainly been light on the politics. In fact, some of the more memorable and timely jokes in recent years have come from Rock himself, while serving as a presenter.

So it's truly great to see him take the stage once again. Rock's fearlessness isn't his only merit as an Oscar host, of course, but his tendency to ruffle a few political feathers is sorely needed in 2016. In a year where the entire Hollywood machine is being called into question, critiqued and, hopefully, changed, having an Oscars host that isn't afraid to cause a little trouble is a gift that shouldn't be taken for granted, especially considering that it's practically confirmed that Rock will be commenting on the show's lack of diversity; in January, Academy Awards producer Reginald Hudlin told ET that "You should expect #OscarsSoWhite jokes."

Mark my words. Unless Leonardo DiCaprio loses the Oscar to Meryl Streep, Rock hosting will be the biggest story to come out of the 2015 Academy Awards.