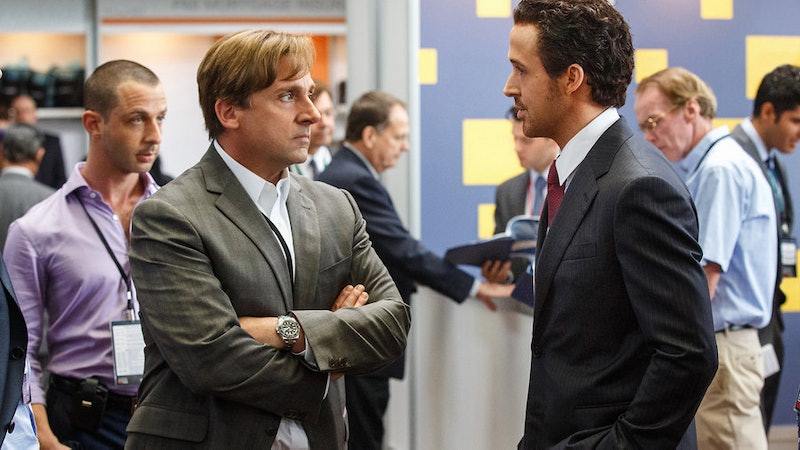 Hoo boy. When your organization's 2015 awards ceremony is branded #OscarsSoWhite by irate movie lovers, one might think you would take strides to prevent such a debacle from taking place again anytime soon. And yet, watching the announcement for the 2016 Oscars nominations on Thursday morning felt like sitting through a bad case of déjà vu: once again, all the nominees in the Best Actor, Actress, Supporting Actor, and Supporting Actress are white. All 20 of them. Prior to 2015, the last time this happened was 19 years ago, when Nicolas Cage (Leaving Las Vegas), Susan Sarandon (Dead Man Walking), Kevin Spacey (The Usual Suspects), and Mira Sorvino (Mighty Aphrodite) took home the four acting prizes in 1996. So how does the general diversity of the 2016 Oscars compare to 2015 and 1996?

Things didn't look so great back in 1996, when Braveheart took home Best Picture. In addition to the 20 white Acting nominees, all 5 Directing nominees were also white — and also men, but that's par for the course when it comes to the Oscars. There was a tiny bit of racial diversity in the Best Picture nominees: one of them, Sense And Sensibility, was directed by Taiwanese-American filmmaker Ang Lee. Sadly, he missed out on a Best Director nomination that year in favor of one of the five aforementioned white men... although the Academy would make it up to him later with two trophies for Brokeback Mountain and Life Of Pi.

In terms of gender diversity, one of the five Best Picture nominees — Sense And Sensibility (again!) — featured a female protagonist and carried its nomination under the name of its female producer, Lindsay Doran. (One out of five ain't bad for Hollywood two decades ago, right?) In the Acting fields, the male categories are more often filled with performers from Best Picture-nominated films than their female counterparts, simply because more male-driven films are typically nominated for the top prize. But, in a rare show of equality, 1996 featured exactly the same number of acting nominees from Best Picture nominees on both sides of the table: three each.

Finally, of the 10 scripts nominated for Best Screenplay in 1996, two were written by women: Il Postino co-writer Anna Pavignano, and Best Adapted Screenplay Emma Thompson, who adapted Sense And Sensibility, a book about a woman by a woman (Jane Austen) starring a woman — herself.

By 2015, the next year featuring 20 white acting nominees, things had improved markedly in one regard: the number of female producers. Five of the eight films nominated for Best Picture last year counted women among their co-producers: Boyhood, The Imitation Game, Selma, The Theory Of Everything, and Whiplash. In the Best Director field, all five nominees were once again men — but, this time, one of them, Mexican filmmaker Alejandro G. Iñárritu (who won for directing Birdman), was non-white. However, by almost every other metric, 2015 was actually a worse year for diversity than 1996.

Although Martin Luther King, Jr. biopic Selma was nominated for Best Picture, the Academy famously snubbed both its acclaimed director, Ava DuVernay (who would have been the first Best Director nominee who was both a woman and a non-white), and its compelling star, David Oyelowo. And the one-fifths fraction of Best Picture nominees that featured female protagonists in 1996 was down to 0.5 out of eight — only The Theory Of Everything had a female star, Felicity Jones, and even she had to share her film with a male co-star, Eddie Redmayne — who took home an Oscar for Best Actor while she went home empty-handed.

That lack of female-led films in the Best Picture race created a bigger disparity in the Acting fields, where seven of the 10 male nominees were from Best Picture nominees, but only four women. (The disparity was greatest in the Lead categories, where four out of the five men came from Best Picture nominees but only one woman — Felicity Jones.) And, finally, the Screenplay categories went down from two out of 10 female nominees in 1996 to literally zero in 2015. That's not even stasis, much less progress — that's literally moving backward.

So where are we in 2016? Sadly, we're still looking much more like last year's regrettable ceremony than we are 1996's. Like last year, five of the eight Best Picture nominees have female producers (The Big Short, Bridge Of Spies, Brooklyn, The Revenant, Spotlight), and, also like last year, there is one non-white Director among the five men nominated. The same one from last year, of course (Iñárritu) — but one nonetheless.

The gender disparity in the Acting fields is the same as it was last year, with three more male nominees coming from Best Picture-nominated films than women. This, despite the fact that the Best Picture nominees themselves are a step up in terms of gender diversity from last year, with two out of eight films featuring female protagonists rather than 0.5 (Brooklyn and Room).

The most encouraging progress this year comes in the Screenplay fields, which are up from zero female nominees last year to four: Inside Out's co-writer Meg LeFauve and Straight Outta Compton's co-writer Andrea Berloff in the Original category, and Carol's Phyllis Nagy (adapting a book by Patricia Highsmith) and Room's Emma Donoghue (adapting her own novel) in the Adapted category. (However, it should be noted that none of those four women are persons of color.)

So what does this tell us? In the two decades that have elapsed since 1996's #OscarsSoWhite, Hollywood has marginally improved in a couple of ways: in the number of women behind the scenes, both as producers and writers, and in the number of female-driven films that the Academy talks seriously as Best Picture contenders. Of course, that comes with one pretty big caveat: those women still usually tend to be white.

Sadly, we seem to have made zero progress when it comes to making and recognizing films with racially diverse casts. When when they do get made, they still seem to slip through the cracks of the Academy (which is made up of nearly 94 percent white members), like this year's Compton, Creed, and Beasts Of No Nation. Variety points out that, if Hollywood hiring practices reflected the real-life demographics of our country, then of the 305 Academy-eligible films released this year, then 150+ would have been directed by women, 50 by Hispanic filmmakers, 45 by black filmmakers, and dozens more by filmmakers of various other ethnicities and sexualities. By that same token, over 100 of them would have featured actors belonging to some racial or ethnic group other than Caucasian. Obviously, that didn't happen.

Despite 18 consecutive years of having avoided a whitewashed acting race, we've now had one two years in a row. Responding to the #OscarsSoWhite controversy, the Academy's president Cheryl Boone Isaacs assured us that she would be launching an initiative called A2020, a "a five-year plan to study practices at the Academy with the aim of improving the diversity of its own staff and governance while also bringing new voices into the organization. It is also intended to encourage and to push the industry to examine its hiring practices and to begin to make changes."

More like this
Keke Palmer Hopes 'Lightyear' Will Help “Normalise” Same-Sex Relationships
By Sam Ramsden
Lilibet & Prince Charles’ First Meeting Was Emotional, According To Reports
By El Hunt
'Mean Girls' ​​Daniel Franzese Spoke Candidly About Conversion Therapy
By Rachel Mantock
Viktor Hargreeves’ Coming Out Scenes Are The Sweetest Part Of Umbrella Academy Season 3
By Gretchen Smail
Get Even More From Bustle — Sign Up For The Newsletter