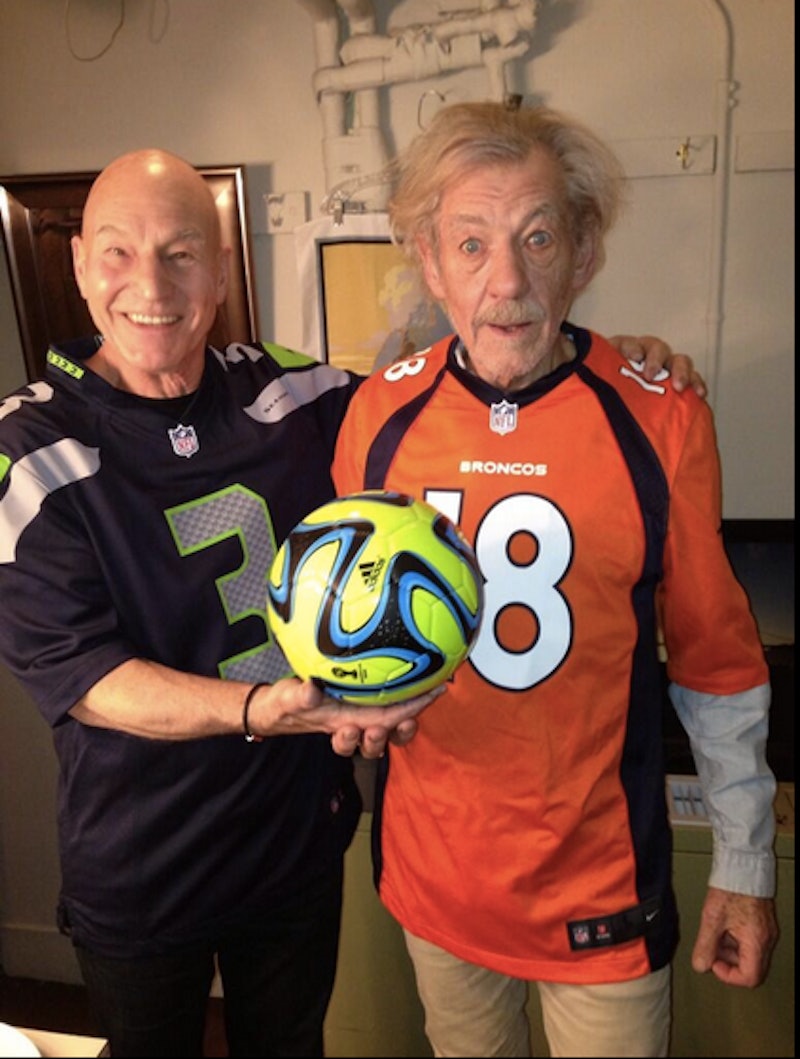 Oh, bless. Patrick Stewart and Ian McKellen are at it again, making New York City, the Internet, and the world a better place to live in. Just when I thought Friday's Twitpics couldn’t get anymore delightful, Patrick Stewart posted this pic with Ian McKellen, each looking so psyched for Sunday’s big game. Oh Patrick and Ian and their wonderfully wry English humo(u)r! Truth be told, I enjoy American football as much, if not less, than your average Brit, so I took their lovely little prod to the sport with great joy.

Other than the fact that these two 70-somethings are bigger Internet sensations than pop stars roughly a third of their age, they’re also totally killing it at the self-promotion game. Waiting for Godot and No Man’s Land are dark, absurd, existential and masterfully written pieces of theater — and with these two as their stars, people can’t get enough.

Seriously, think of how many people have trudged through Times Square just to these two legends of stage and screen acting side-by-side. So if it takes a bit of cheeky tweeting to get a younger crowd into the theater, then by all means gentlemen, onward. Broadway, and all of us, are better for it. Now, who wants to catch these guys on Sunday before watching The Big Game? Pre-theater wings and beer included.

More like this
8 Epic Must-See Moments To Relive From The Lionesses’ Euros Win
By El Hunt
Lewis Hamilton Turned Down A Role In 'Top Gun: Maverick' For This Surprising Reason
By Darshita Goyal
Everything To Know About The Musical 'Joker' Sequel – & Lady Gaga’s Role
By El Hunt and Sam Ramsden
Stephen Graham’s Wife Plays A Vital Role In His Career
By Emma Madden and Sophie McEvoy
Get Even More From Bustle — Sign Up For The Newsletter