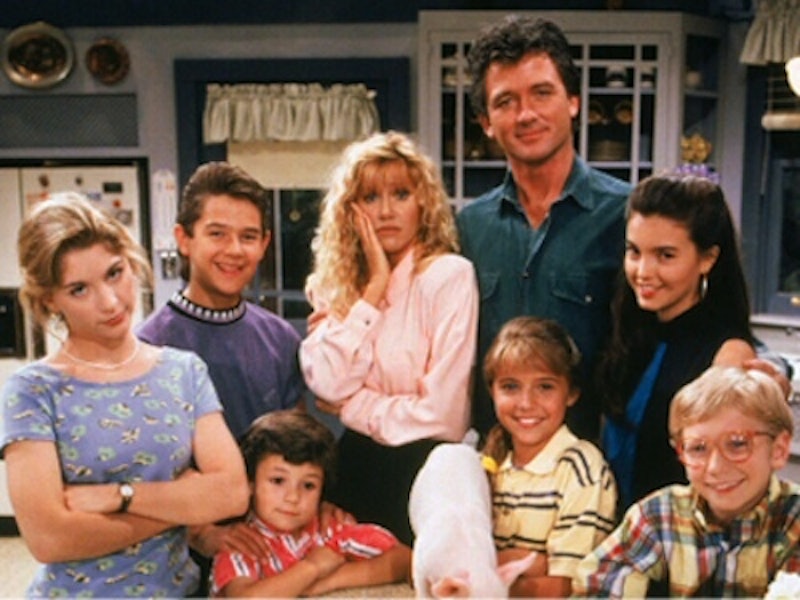 Like many kids growing up in the '90s, I spent my Friday nights in front of the TV watching the TGIF lineup on ABC. Yes, a lineup of family sitcom fare that made you say "Thank God It's Friday!" I loved Full House, Boy Meets World, Family Matters and when it debuted in 1991, I was hooked on Step By Step. Sure, it wasn't my first pick, but it wasn't a bad way to finish off a Friday night. Or at least when I was a kid looking to stay up until 10 p.m. But once I became an adult I quickly realized Step By Step is one of the worst shows of the '90s.

It was supposed to be a hipper, updated take on the Brady Bunch, with TV stars Suzanne Somers (Three's Company) playing Carol Foster and Patrick Duffy (Dallas) playing Frank Lambert, divorcees who fall in love while on vacation separately and decide to get married. This all happens without either of them telling their kids, of which they both have three each. The show picks up right when Carol and Frank get back from vacation and have to tell their kids exactly what happened.

For those who didn't live through the show, you may think that doesn't sound so bad. Especially if you've ever seen re-runs of The Brady Bunch. But oh, this was bad. I actually feel like I need to apologize to my parents for making them watch that with me all those years ago. (Sorry, mom and dad.)

Since we have a habit of being nostalgic about all things '90s, I want to make it clear that Step By Step will not make you yearn for the days of family sitcoms. But to make this point even clearer, I'm going to take you step by step (sorry), sharing 11 reasons why this show is not worth your time.

Step 1: Every Character Was A Bit Too On The Nose

When you're a kid, you don't really think much about character development, you just try to find a character you can call your favorite, which you likely chose because you liked the way they dressed or their hair or their face. You're a kid, so what do you know about powerful female characters? But, watching this show again you realize all of these kids are just terrible stereotypes of the popular girl, the jock, the nerd, the tomboy, and the brain. But unlike The Breakfast Club, where John Hughes flips the script and makes his so-called stereotypical characters more than meets the eye, there was nothing more with these characters. They were exactly what you thought all along.

Step 2: It Was Just A Full House Rip-Off

I remember thinking this theme song was amazing — so catchy! But listening back now as an adult, I realize, it was just a cheap rip-off of the Full House theme song. Probably because it was written by the same people. And then you begin to realize, the whole show is just a poor man's Full House: the way its filmed, its flimsy life lessons, the way everything is perfectly solved in a cool 30 minutes. They say imitation is the sincerest form of flattery, but Step By Step's unoriginality was just an insult to its young viewers.

These two decided to get married within the first few days of meeting each other without even telling their kids. I'm no psychologist, but that can't be great for your children. While the other TGIF shows were all about parents who seemed to know exactly what to do and say at the exact right moment, these parents were flawed. Not a bad thing, but the show didn't really seem to make that clear to the audience. Instead, we were under the impression that it's the kids who need to get along. That it's their fault that they just can't let things go and love each other. No, in reality, these parents were extremely selfish and if this was a better written show, that would have played a bigger part in the series.

Step 4: It's A Rather Ridiculous Take On Step Families

This show came out at a time when no one could help but cite the percentage of couples getting divorced. Of course, after divorce came marriage once again and soon people were focus on step-families and how they were replacing the nuclear family that was once portrayed on TV as the mom, dad, big brother and little sister. But Step By Step was a real missed opportunity when it came to portraying a blended family.

Instead, every episode seemed to be the same, the kids would fight and the parents would have to break it up and then everything would be great. That is, until the next episode where the vicious cycle would continue. You never really cared about this family, you almost wish they would just call it quits because it seemed like it was more trouble than it was really worth. The world would have to wait until Modern Family to see a much better, funnier, more heartfelt portrayal of the unconventional family dynamic.

Step 5: The Lesson Always Seemed To Be The Same

While other shows in the TGIF block had very special episodes about drugs or bullying or safe sex, Step By Step didn't seem that interested in being serious. In episodes like the one where Dana nearly gets assaulted by an older man, it turns into a joke a little too quickly. Most of the time though, the show only seemed interested in teaching one lesson and it was: love your family. All good and well, but the show never really committed to what that meant when you were part of a step family. Instead it was just rhetoric said over and over until it became meaningless.

Step 6: The Show's Plotlines Seemed A Little Too Familiar

These family sitcoms often seem predictable, but Step By Step seemed to be straight up stealing plotlines from other shows and trying to pass them off as their own. The bad part was, their versions were not nearly as good as the episodes they were trying to be. They often tried to find humor in moments that seemed meant for life lessons. Case in point: Dana takes muscle relaxers and becomes a Cody-like character. Everyone laughs at her ridiculousness, but it seems like they should have been more concerned about her downing too many of the highly addictive pills. It's just nowhere near as good as Jesse Spano taking caffeine pills on Saved By The Bell. Not even close.

Step 7: The Blatant Over Use Of The Laugh Track

Using the laugh track doesn't make the jokes funnier, especially when they weren't very funny to begin with. The jokes on Step By Step weren't really jokes. By this, I mean, the jokes weren't funny, Like, at all. But yet the laugh track always played. If you watch an episode of the half hour comedy, you can't help by feel like you're having a breakdown with the amount of times the laugh track is used. It's worse because you're never laughing with it. Cody's jokes about whether American Cheese has holes in Switzerland aren't going to make you LOL. JT's constant harassment of the women on the show with his terrible pick-up lines are more offensive than anything. And Karen's dumb cheerleader act just seems insulting. But someone somewhere was pushing a button to make you think it was all just so hilarious. Don't be fooled.

Step 8: Having A Crush On Your Step Cousin Is Just Plain Creepy

Throughout the show Cody is constantly hitting on Dana, even writing her love letters in a later season to show her how real their love is. She's always seemed unenthused by his acts of love, but as an adult, you can't help but wonder why everyone wasn't more grossed out by this. He was basically harassing her on a daily basis. Sure, Cody and Dana weren't really related, but there's still something so icky at the thought of him hitting on his step-cousin. Yet, the show never seemed to comment on that, instead, they played this off for laughs. Canned laughs, since quasi incest is never very funny.

Step 9: Way Too Many Misunderstandings That Involved Clever Disguises

Of course, a good comedy is all about misunderstandings, but on Step By Step these misunderstandings are just too ridiculous that you can't even believe them. And they're made even more ridiculous through the use of disguises that just aren't that clever. This includes JT going undercover as an aerobics instructor, though he looks like a teenager in spandex. Carol also dresses up like a man to try and fit in at a basketball game. Believe me, she looks nothing like a man. And let's not even talk about the time when JT and Cody had to pretend to be male strippers to make some extra money. Yeah, that happened.

Step 10: Everyone On The Show Seemed Way Oversexed

It wasn't just Cody's crush on Dana that was a little off, everyone on the show seemed to a little too sexed up. JT always seemed like he was trying to get someone to get in his pants, including the weird sexual tension he had with Dana, his frequent sparring partner and his younger sister AJ. In one episode, JT becomes AJ's manager and books her an acting gig for a commercial that ends up being for a phone sex line. Yeah, a little weird. Suzanne Somers and Patrick Duffy are always talking about trying to get the kids out of the house so they can get it on. Duffy is often begging for sex and when they did show them in the bedroom they're constantly having kids walk in on them with problems while they're "sleeping." These kids were way too old to believe that, but not too old to be traumatized by it all.

Step 11: Cousin Cody's Real Life Past Is Hard To Ignore

Cody is supposed to be the comic relief of the show. The surfer dude with the Keanu Reeves accent that lives in a van parked, not down by the river, but right outside the Lambert-Foster home. He was also painted as the show's heartthrob, getting those obligatory canned "woos" the first time he stepped into frame. In real life though the actor that played Cody, Sasha Mitchell, was arrested for beating his wife in 1995 and given "three years probation and ordered to perform community service and attend counseling classes for spouse abusers." After failing to comply, he was given 30 days in jail, but was allowed to leave during the day to film the show. After "several more incidents of violence against his wife," Mitchell left the show.

I knew nothing about this when I was a kid, but knowing now definitely leaves a bad taste in my mouth and makes it hard to like this character. A very big problem being that Cody's supposed to be the glue that holds the two families together.

As you can see, there's a very good reason why you have't heard about any Step By Step revivals. To be fair, the standards just weren't as high back then for family shows. The age of TV this was not. But now after seeing some actual good sitcoms (the ABC lineup of Fresh Off The Boat, black-ish, The Goldbergs is killing it right now) we need to be honest about shows like this. And honestly, no one could ever make me watch Step By Step again.