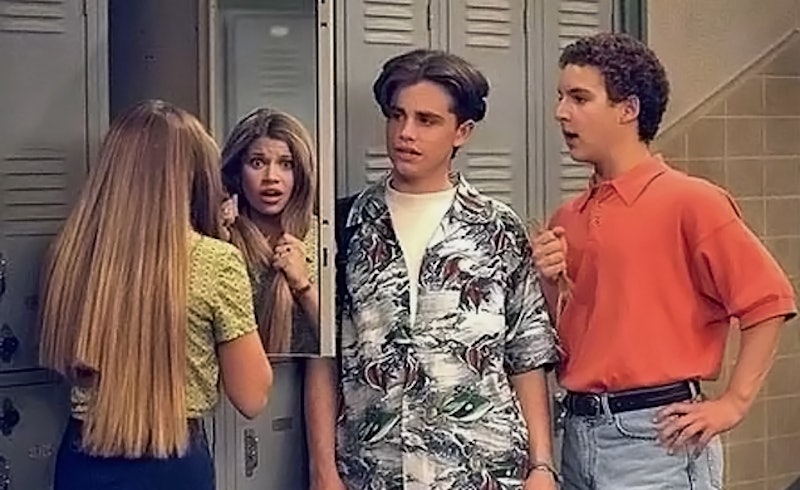 It was the best of times, it was the worst of times, it was the epoch of grunge rock, it was the epoch of boy bands, it was the season of frosted tips, it was the season of slap bracelets, it was the spring of the home computer, it was the winter of dial-up, it was…the '90s.* For many Millennials, the '90s is a time steeped deeply in nostalgia. It was the decade that saw us through late-childhood, adolescence, and into early adulthood, a transformational period that now seems softened and safe, even if it didn’t feel that way at the time. Certain objects, songs, and television shows from the '90s have a weird power to instantly plunge me into overly enthusiastic nostalgia; mention something innocuous to me like Round House , and I’ll be seized by the sudden need to wax rhapsodic about the glories of mid-'90s adolescent-oriented television. (Utter the words “Empire Records” and my brain will completely short circuit; I’ll be totally useless until I’ve had a chance to sing along to the soundtrack in its entirety).

Of course, everyone experienced the '90s differently, and some remember the time more fondly than others. But if you were a pop-culture obsessed, Gen Y adolescent, here’s what your average Friday may have looked like:

Your radio alarm is playing Celine Dion and, depending on your age and personality, you have the poster for one of the following musical acts on the wall across from your bed: Britney Spears, The Spice Girls, NSYNC, The Backstreet Boys, Alanis Morissette, Nirvana, or Oasis. Those are your choices.

In the '90s, Pop Tarts Crunch — Pop Tarts as cereal — was considered a legit breakfast for growing humans, which sums up perfectly why the '90s was both awesome and ridiculous. (Also, I appreciate that this commercial argues that the priorities of young girls should be (a) Boys and (b) Cereal. Way to teach us early, Kellogg's.)

Your mother tells you to eat your Flintstones Vitamin, which has the texture of wet chalk. She has not yet realized that you throw all of your vitamins in the gap between the couch and the wall.

8:30 A.M. Drive to school, in which your convince your mother to let you play “Kiss From a Rose” three times in a row.

You’re wearing jellies, a teddy bear backpack, and as much glitter lip gloss as your mother will let you get away with. You’re looking fly.

In 1995, M&Ms caused a national uproar when Mars, Inc. announced that it was getting rid of the tan M&M (Yes, that was a thing!), and that the public would vote on the new color. Yes, VOTE! America, land of democracy!

Your class spends first period hotly debating the merits of pink, purple, and blue before finally casting your votes. You are all either socially engaged, civic-minded youths, or you're just really into sugar.

You and your comrades sit in front of giant desktop computers and play with Paint, make sick word art, and master the epic struggle that is Oregon Trail. You learn the hard way that it’s a cruel, pitiless world out there, and there’s no time for honor when you’re trying to survive — because, even when you do everything right, your oxen will get stolen, your friends will die of dysentery, and somehow you’ll break an arm. Emotion only leads to weakness and death. Trust no one, and always buy extra supplies. You are ready for the zombie apocalypse.

“Texting” in this case means “passing notes to classmates” and hoping that your teacher doesn’t hear the rustle of notebook paper being folded. Most of these notes are incredibly elaborate games of M.A.S.H., and you wait with bated breath to discover if your future husband is Jordan Catalano, Carlton Banks, Rider Strong, or Screech. You are praying for Jordan Catalano.

(When you grow up, it occurs to you that M.A.S.H. back in the day tended to be super heteronormative).

You eat a healthy meal of Lunchables and Cheetos, with a Hi-C on the side. Hi-C contains 10 percent real fruit juice, so you know it is TOTALLY HEALTHY.

Your class has a special afternoon session in the library, where you painstakingly learn to use the card catalogue and find periodicals using giant indexes that organize things by subject. Little do you know that this information will all be completely obsolete in five years.

You unwind from the busy school day with chocolate Dunk-A-Roos and a Crystal Pepsi. It looks like sparkling water, but it tastes like soda! What amazing food technology will they think of next?! (Also, what the hell is this commercial?)

You work off your excess energy (Read: sugar high) by going to town with your hot pink Skip-It. As you break the Skip-It world record, you ponder the injustice of the Skip-It’s being excluded from P.E. credit.

It takes five minutes for you computer to get through the computerized buzzing and mewling sounds that mark the launch of AOL. You head over to your favorite chatroom, only to be kicked off of the internet because your parents need to use the phone.

You head to the video store to pick out this evening’s entertainment. After browsing for way too long, you pick a winner, and convince you mother to buy you a bag of War Heads. These candies taste terrible and are so sour they make your face fold in on itself, but you don’t care because you are HARD CORE.

Even with a video ready to go, there’s no way you’re missing the holy grail of television, TGIF. You watch Family Matters and Boy Meets World while you eat Little Ceasar’s pizza and a ludicrous amount Crazy Bread.

You finally force yourself to stop TGIF so that you can watch your movie. The masterpiece for this evening is Airborne, the classic 1993 film that tells the inspirational story of a California teen who moves to Cincinnati and just doesn’t fit in. Eventually he earns everyone’s respect by impressing them with his mad rollerblading skills, because of course.

Also, I am compelled to point out that Seth Green is in this movie, and this is his hair:

Furthermore, Jack Black! (I'm not sure what's happening with his hair either, TBH):

You and your sisters close out the night with a quick round of Girl Talk. Because you refuse to call the guy from gym class and "tell him something gross," you are forced to wear a dreaded “zit sticker,” a red sticky circle that represents the pinnacle of human failure. This game teaches you that, as a girl, acne is the worst thing that can possibly happen to you.

You settle into bed, say "goodnight" to your American Girl Doll, and close your eyes. In your dreams, the world turns inexorably against the squiggly cartoon background of the Saved By the Bell credits sequence. Who knows what wonders the far-off future will hold?**

** Snapchat, “on fleek,” and the Kardashians, apparently.