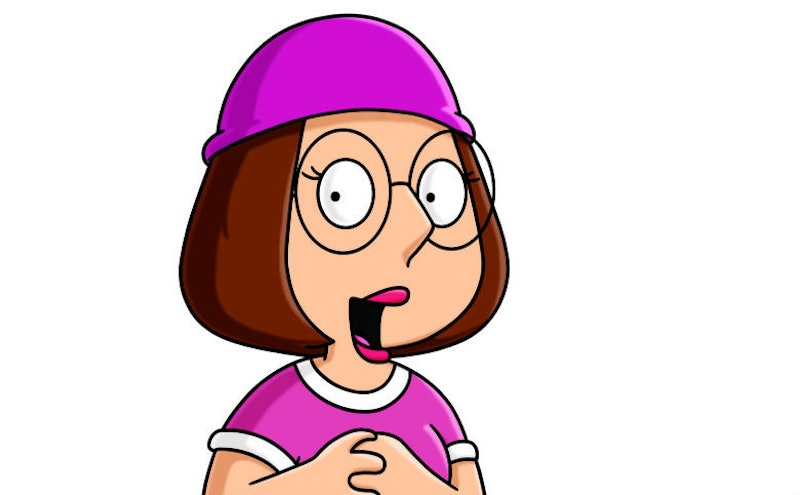 It seems today is the 15th anniversary of Family Guy's premiere episode, which means we've witnessed 15 years of Seth MacFarlane's most successful cartoon sitcom and we're probably worse for the wear. The show has famously been called out for its racism and rampant pedophilia jokes — and rightfully so — but one of the longest-running gags on the stalwart Fox comedy is that of Meg, in general.

The Griffin family's daughter isn't smart or popular. She's about as average as a character voiced by Mila Kunis can get, and yet she's the constant recipient of jokes about her being ugly, fat, or so unattractive that men continually mistake her for a boy. How hilarious. While it appears that like all Family Guy running gags, the Meg bashing started as a parody of the ridiculous standards culture demands of young girls (I've sat through enough episodes of the tired sitcom with my family to know), 15 seasons in, it's clear that in its older age Family Guy is just a little too fond of taking whacks at the punching bag it's created.

So, as a marker of its old age, let's see how "funny" it is when we stack 15 Meg jokes back-to-back-to-back. Happy birthday, Family Guy.

When Lois starts binge-eating, she gains weight, has a heart-attack, then gets liposuction to look "normal" again. Her response? "Eating is not the way to solve your problems, you hear that, Meg?" Meg responds that she doesn't eat her feelings, she cuts herself.

See? It's funny because it's so fucked up it opens up a black whole in your tiny heart where all feelings go to get crushed into oblivion.

2. That Time Meg Hilariously Has No Friends

So she hangs out at the mall and scavenges for food like an animal until some guy who works at Taco Bell smacks a taco tray on the table to scare her off like a raccoon.

Get it? Because crushing loneliness is such a joke!

3. That Time Meg Hoped Burglars Would "Take Advantage" of Her

You know, the time when the whole family is hanging out in the panic room because there are burglars in their house and Peter and Lois send Meg out on an errand, because what's the worst that could happen? Well, she gets kidnapped and she's so desperate for affection she hopes they sexually assault her, but they won't because she's so "ugly" they tell Peter and Lois “We have your son.”

Oh sure. Let us all laugh at the person driven so insane by her "appearance" that she's fucked up enough to beg to be assaulted. What a regular knee-slapper.

4. That Time Meg Wearing Jeans Causes a Girl to Kill Herself

In an attempt to make fun of the notion that teen girls need makeovers, Family Guy sends Meg and Lois to the mall to get make Meg over. But when she tries on jeans, the young salesgirl is so horrified, she burns herself alive. Later, a news camera man does the same.

But it's making fun of people who judge people for their looks, so it can't be overkill or flat out unfunny. It's science.

5. That Time Meg is Too Fat For the Family Boat Race

During a yacht race, the Griffin Family is almost to the finish line but they need to lose a little weight so they drop Meg in the ocean, where she gets picked up in a fishing net. "What's that?" one sailor asks. "That's what we call a manatee, boys. A sea cow," says the captain.

Oh, I see. You're supposed to laugh because she was too heavy for the boat and now that she's humiliated and being treated like a dead fish, the sailors think she's blubbery like a manatee. Yes. I'm definitely laughing now.

6. That Time Stewie Told Meg Gay Marriage Had Ruined Her

"You hear that Meg? Guys can marry other guys now. So, umm. This is awkward, but... I mean, if they can do that... that's pretty much it for you, isn't it? I mean you might as well pack it in, game over."

Right, because that's just so hilarious and considerate of everyone involved.

7. That Time Meg Tried to Get Expelled With a Sex Tape

And she would have gotten away with it too, if she wasn't so completely unattractive that not a single gross person would watch her tape.

What a riotous take on the notion that Meg is unattractive, pathetic, and super fucked up about it all. Let us rejoice about the fact that Family Guy has removed our abilities to be irked by such things. Who needs to feel things, anyway?

Meg asks her crush Craig Hoffman out and his only response is “I don’t go out with dudes.”

Wow, that's only the 800th time we've seen this show compare Meg's unattractiveness to that of a little boy, but I've been tied to this chair and forced to watch every episode of Family Guy on a loop, so I'm going to go ahead and laugh.

9. That Time Everyone Was an Adorable Disney Character Except Meg

The Griffins are all adorable — even Chris — and Meg's basically Ursula. (Related: That time Meg was the Sarlac Pit in Family Guy's Return of the Jedi spoof and that time Meg was the meteor monster in the Empire Strikes Back parody. So clearly, this is such an original thought.)

Meg comes in with her makeover: blonde hair, lots of make-up, midriff showing. Peter comes to the rescue and says, "Meg, I’ve always thought you were beautiful just the way you—" then he starts laughing. "Couldn’t do that with a straight face."

Yeah, we get that Peter is a horrible person, but seriously?

11. That Time Meg Gets Pegged By A Million Dodge Balls Because No One Likes Her

Why aren't you laughing? Oh, because the concept of that much hatred turned into physical pain makes you sad? What are you, a person?

12. That Time Meg Destroys Her Room With a Pimple

13. That Time (And All The Other Times) Peter Farts in Meg's Face

That's it. Peter, father of the freaking year, continually farts in Meg's face. That is the entire recurring joke.

It's clever because it happens all the time.

14. That Time a Doctor Has to Verify That Meg's Boyfriend is Human

It's so inconceivable that Meg would find a boyfriend that Peter invites the whole town over to see his daughter hang out with her boyfriend and even enlists a doctor to verify that "Yep, he's totally normal."

You're suppose to laugh because no one ever cares when you find a boyfriend, and deep down, that really hurts. Laugh through the pain, oh vain one.

15. That Time Jimmy Would Rather Kill His Brother Than Be Meg's Date

Meg asks Jimmy out. Jimmy kills his brother. Jimmy has legitimate excuse to get out going to the dance with Meg.

Murder is hilarious when it happens in order to drive home the point that someone is ugly, isn't it?

So yeah, congrats on those 15 years of Meg bashing, Family Guy. You could stop and try something more ambitious, but something tells us you'll probably just stick to beating this dead horse. And while you're probably already thinking of some insulting cutaway about Meg as a dead horse, we're going to go ahead and change the channel on you. Happy Anniversary.