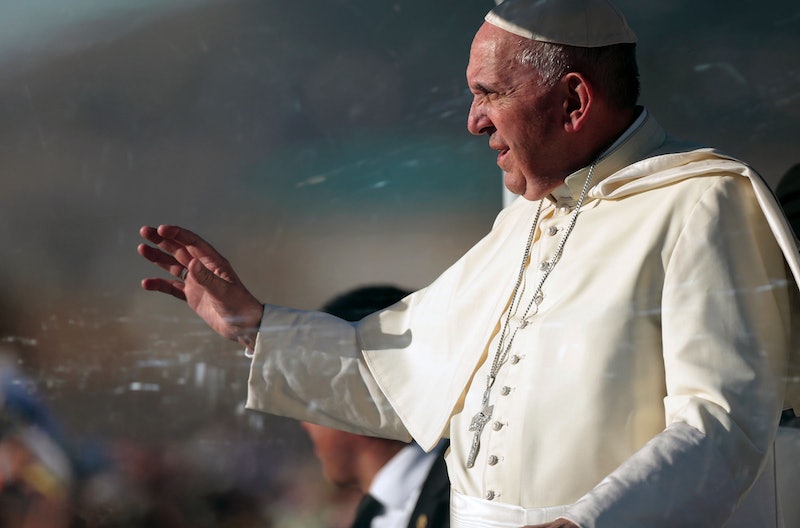 Indirectly entering the debate on one of the tenser topics among GOP presidential candidates, Pope Francis spoke about immigration on the U.S.-Mexico border Wednesday. Just feet away from Texas, a solid Republican state, the pope called for compassion, something utterly lacking in some presidential candidates', particularly Donald Trump's, hard stances on border security and refugee policy. The selection of Ciudad Juaréz, across the border from El Paso, Texas, highlighted some of the stark contrasts between the two countries and why many Mexican and Central American immigrants have made the journey.

The pope began the service symbolically with a blessing on the border. A memorial was built in preparation for his arrival that overlooked the border fence on the cemented-over river bank of the Rio Grande. With about 200,000 behind him on the Mexican side and a small group of Catholics and border police watching from the American side, the pope laid a bouquet of flowers in front of the memorial and made a sign of the cross. Then he looked toward the United States and gave a papal blessing. About a quarter of the residents of El Paso are foreign-born, making the site a perfect location for a serious talk on immigration policy.

That's especially true when you consider the Mexican city it shares a border with. Until recently, Ciudad Juarez was one of the most dangerous cities in the world. Levels of violence have dropped in recent years, but at the height of the killings between 2009 and 2012, it wasn't unusual to have 20 killings in a day. The average was 8.5 per day. By 2015, those numbers had dropped significantly. They remain inflated. Meanwhile, El Paso was ranked the safest American city of its size for three straight years — exactly at the peak of the Juarez violence.

The significantly safer environment is is just one area in which the quality of life differs across the border. Even as violence drops in Mexico, Central American countries like Honduras and El Salvador have become some of the most dangerous places on earth outside of war zones. Educational opportunities, wages, and family connections are just some of the other reasons that migrants make the journey. The pope mentioned several, saying migrants are "expelled by poverty and violence, by drug trafficking and criminal organizations."

The pope also spoke of the many migrants who are now in Ciudad Juarez hoping to make it to the United States:

Here in Ciudad Juárez, as in other border areas, there are thousands of immigrants from Central American and other countries, not forgetting the many Mexicans who also seek to pass over "to the other side." Each step, a journey laden with grave injustices: the enslaved, the imprisoned and extorted; so many of these brothers and sisters of ours are the consequence of a trade in human beings.

The first pope from the Americas, Pope Francis has made immigration and the plight of migrants a major focus of his papacy. His first trip as the head papal leader was to the Italian island of Lampedusa, where many migrants heading to Europe end up after making the dangerous crossing from Libya. Many drown — as many as 700 on one day in April, after a shipwreck off the Libyan coast.

The pope also spoke about humanizing the migrant experience:

We cannot deny the humanitarian crisis which in recent years has meant the migration of thousands of people. The human tragedy that is forced migration is a global phenomenon today. This crisis, which can be measured in numbers and statistics, we want instead to measure with names, stories, families.

The mass was held on a fairground next to the border, but the service was simulcast on the American side in the Sun Bowl football stadium. One American who did not seem to get the message was Donald Trump. He attacked the pope for being a tool of the Mexican government. "Mexico got him to do it because Mexico wants to keep the border just the way it is because they're making a fortune and we're losing," Trump said in a telephone interview with Fox Business.

The Vatican denied Trump's allegations, saying the pope always talks about migration and how to solve such problems in a humane way. That is a message politicians should welcome during a time of increased hateful rhetoric. Maybe Trump needs to visit El Paso, where life on the border thrives — with proportionally one of the largest immigrant populations in the country.