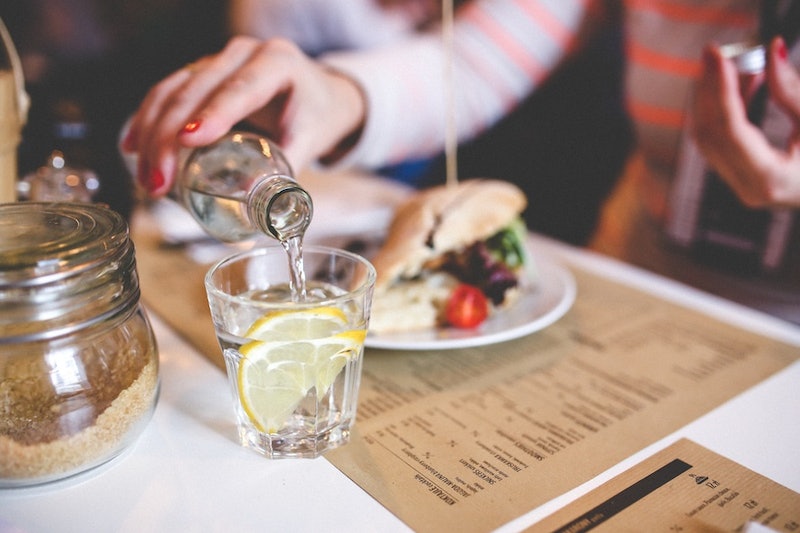 We all know how important it is to stay hydrated. But for anyone who's tried the whole "eight glasses a day" thing, you know that it can seem like quite the harrowing feat. I mean, that's a lot of water to down. So it's a good idea to remember that gulping water isn't the only way to stay hydrated.

With that in mind, here's a little refresher on all the wonders of water. According to the Mayo Clinic, water is responsible for moistening tissues, such as your eyes and nose; protecting your organs and tissues; lubricating joints; regulating your body temperature; lessening the burden on the kidneys by helping to flush out all your toxins; preventing constipation; and carrying nutrients and oxygen to the cells. Yeah, water is kind of a big deal.

So you might be happy to know that you can treat your body to all the benefits of hydration, without drowning in gallons of water. In fact, the "eight glasses a day" recommendation is actually a myth. As Sally Tamarkin noted on Greatist.com, "... the 64-ounces-in-a-day directive has been abandoned and replaced with the Board’s 2004 recommendation that we figure out how much to drink each day by 'letting our thirst be [our] guide.'" That means you should adjust your intake to your lifestyle, and up the amount if you're showing signs of dehydration.

But don't let it get to that point, and don't give up just because water isn't your favorite thing ever. Here are easy ways to stay hydrated that don't involved guzzling glass after glass.

1. Sip On Drinks All Day Long

You don't have to carry around a gallon jug of H20, à la the beefy dudes at the gym. But you should spend the day sipping on whatever liquids your heart desires. Think about coconut water, sports drinks, teas, or sparkling water. Turn sipping into a habit, and you're likely to never get dehydrated again.

2. Have Oatmeal For Breakfast

You gotta have breakfast, and you gotta have water. These are two things so many of us skip out on, so why not make it super easy and kill two birds with one stone? As Jillian Kramer noted on Glamour, creamy oatmeal (especially sprinkled with fruit) is a great source of fluids because the oats absorb the water or milk they are cooked in. It doesn't get any easier than that.

I know, you have a date with Mr. Bag Of Chips tonight, but he's been dehydrating you, and making you thirsty, and the whole thing just isn't really working out. So cancel that plan and switch up your snack date for something a little more hydrating.

4. Do Go Crazy With A Bowl Of Fruit

So now that chips are gone from your every-single-day life, you want to get in the habit of snacking on fruit — which just so happens to be full of water, as well as hydrating electrolytes. As Nicole McDermott noted on Greatist.com, "Many fruits are a great source of both electrolytes and fluids, though the dose of electrolytes can differ from fruit to fruit. Bananas and dates are known for having high levels of the electrolyte potassium, making them a great option for refueling during an intense workout (for example, a long run)." Go get yourself a fruit cup, right now.

It's been a long-standing belief that coffee causes dehydration, since it is a mild diuretic. But that's recently been debunked. According to Emily Faherty on TheDailyBeast.com, "... a recent study in PLOS ONE debunks the myth that [coffee] causes dehydration. Not only will your daily cup contribute to your water needs, coffee can also give you a sharper memory, boost athletic endurance and performance, and reduce the risk of many serious ailments including diabetes and heart disease." So go skip off to Starbucks, worry-free.

Soup is basically delicious water, so it's no wonder it's hydrating. It's even recommended by WebMD as a good source of liquids. The same goes for stews, as well as plain old broth. This is all really good news, especially when it's freezing outside and you just don't want to drink water.

7. Eat Your Water In Salad Form

Salad ingredients are chock full of water. In fact, cucumbers are the most water-based solid food there is. And right up there with it are celery, radishes, tomatoes, peppers, and iceberg lettuce. As Amanda MacMillan noted on Health.com, "Iceberg lettuce tends to get a bad rap, nutrition-wise. Health experts often recommend shunning it in favor of darker greens like spinach or romaine lettuce, which contain higher amounts of fiber and nutrients such as folate and vitamin K. It's a different story when it comes to water content, though: Crispy iceberg has the highest of any lettuce, followed by butterhead, green leaf, and romaine varieties."

Drinking water might not be the most fun thing there ever was, but it is totally necessary for your health. If you simply can't down glass after glass, make it easier on yourself with some of these water substitutes.

More like this
Your Guide To Water Signs
By Brittany Beringer
Starbucks Released New Menu Items For The Summer
By Emma Garza
A Beginner's Guide To Drinking Whiskey
By Alexis Morillo
How To Make The Watermelon, Feta, & Mint Salad Trending On TikTok
By Emma Garza
Get Even More From Bustle — Sign Up For The Newsletter