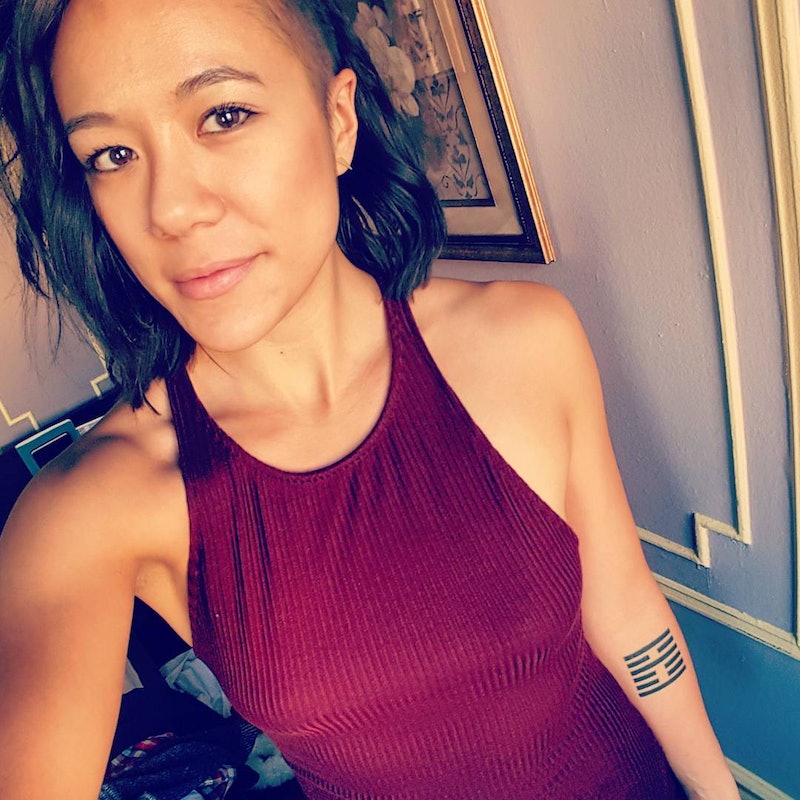 My fingers were stained reddish-orange. The more I stared at them, the more my head pounded. There was a dull pain that radiated from my stomach all the way up to my sternum, and although I wasn't exactly sure what heartburn was, I was pretty sure I had it. Everything I was wearing wreaked of pot, yet I was no longer stoned. The bathroom floor wasn't cold anymore. I guess that's the nice thing about tile; it warms up to you after you've been lying on it for a couple consecutive hours.

A family-size bag of Flamin' Hot Cheetos lay on the floor at my feet, wide open but completely empty. A very small part of me was proud. Not everyone can do that, I cooed to my bloated belly. But the faint sense of accomplishment evaporated as the reality of my sickness hit me.

I knew I had just lost a serious battle to my binge eating disorder (BED). This feeling of failure was not unfamiliar to me; compulsive overeating has plagued me since my teenage years, but this moment in particular was one of my darkest. That's the nature of the BED beast; it can feel like you're constantly moving from one battle to the next, and when you can't conquer your cravings, you conquer whatever food is within your reach.

But my Flamin' Hot Cheetos incident had another element in the mix: I was also smoking marijuana on the regular. If you've ever smoked pot or even gotten high off of it secondhand at a Dave Matthews concert, then you know about a little something called the munchies. It can inspire you to make odd choices — I mean, I've gone to Arby's before — and eat more than you usually might.

But for me, and probably a lot of other people who struggle with compulsive overeating, the munchies is more than a slight bump in your road to getting stoned. It's an unstoppable force that takes over and insists that you eat until you hurt, that you chew and chew until you feel there is at least one thing you have control over in your life.

Earlier in the night, I got high, ordered a large Domino's thin crust pizza with extra cheese, mushrooms, and onions, and polished off nearly every last bit. I inhaled an entire tub of Ben & Jerry's Karamel Sutra. I ripped my way through several packets of gummy bears and Twix bars. I'm sure there was more, but it was almost 10 years ago and I think I've said enough. You don't know the munchies until you're a person with BED who has had the munchies.

In my college days, every time I got stoned, I would end up in the same compromising position at the end of the night — groggy, alone, and acutely ill from the overload of cheese and sugar. This continued for about two years, and I graduated college 35 pounds overweight. I was unhealthy and utterly miserable.

I understand that, at this point of the story, you'd think I would have stopped smoking weed, since it clearly wasn't doing me any favors. But here's the thing: I've always liked marijuana. Weed truly does ease my anxiety, especially when I don't feel like turning to strong prescription drugs. I knew there had to be a way to smoke without dangerously bingeing myself into a rut. I decided that I was going to make a change. I didn't want to lose control every time I smoked pot, because that loss of control was really what left me feeling completely hopeless.

I left my college town, started a master's program, and locked down a job. I was no longer surrounded by teenagers whose sole interests were bongs and late-night McDonald's runs. I started seeing a therapist who I could talk about my BED triggers with, and we hammered out a few things I could do to prevent myself from bingeing, like filling my cabinets with real food and using plates instead of continuously picking out of a bag. It was the first time in my life I spoke about my mental illness with another human being in a space that wasn't filled with ridicule.

It's said that 3.5 percent of American women suffer from BED. Feelings of distress and guilt often accompany episodes of overeating, and there are some people who struggle with purging as well. It's a dangerous disease that, when left untreated for a long period of time, can result in high blood pressure, gallbladder disease, and even heart complications.

Brad Lamm, author, interventionist, and creator of Oprah Winfrey Network's documentary series called "Addicted to Food," tells Bustle that there are actually many more women in the United States who have BED than are reported. Only in 2013 was BED recognized as a mental illness by the American Psychiatric Association.

"Because insurance didn't cover binge eating disorder before, there weren't enough study control groups," Lamm says. That means a lot of people's diseases have gone undiagnosed in the past. As BED gains more attention, though, he expects that the numbers will rise, which hopefully will lead to more people like me seeking out treatment.

While there is potentially a dark side to being stoned and burying myself in food, I've discovered that marijuana also encourages me to slow down.

As I got help, I also started exercising and making better choices in my diet in everyday life. My binge episodes were happening less and less, yet I was still smoking regularly. With therapy, stuffing food into my face when I was high didn't hold the same satisfaction anymore — certainly not when I got the kind of blazed that staring at the seeds of a pomegranate was so mesmerizing, so trippy, that it kept me engrossed for nearly an hour.

I also took a keen interest in cooking and baking high. I'll never forget one Sunday afternoon when I had the whole apartment to myself in the dead of Boston winter, and spontaneously decided to make a butternut squash risotto. I lit a joint and laid out all the ingredients on the kitchen counter. From the start, I was in a trance. Just the aromas of chopping up garlic and onion sent my brain into sensation overload. The sizzling of the olive oil in the pan was hilarious. Watching the transformation from raw ingredients to delicious one-pot wonder was a fascinating thing, and my super-stoned self was fascinated.

In the end, getting high helped me see food in a different light. While there is potentially a dark side to being stoned and burying myself in food, I've discovered that marijuana also encourages me to slow down. It's given me the chance to identify certain smells, notice different textures, and bask in each and every flavor that's in front of me. It's even easier to listen to my stomach when it sends messages to my brain, saying it's had enough. Everything is heightened. Everything is brand new.

I've become quite the chef too; even as I write this, I've got a batch of banana bread in the oven. As soon as I shut this computer off, I plan to fish out my vaporizer and retrieve my latest creation. I know that I'm probably not going to finish the whole loaf in one sitting. Stoned and giddy, I'll eat one piece at a time, chewing and chewing until I know I'm full.