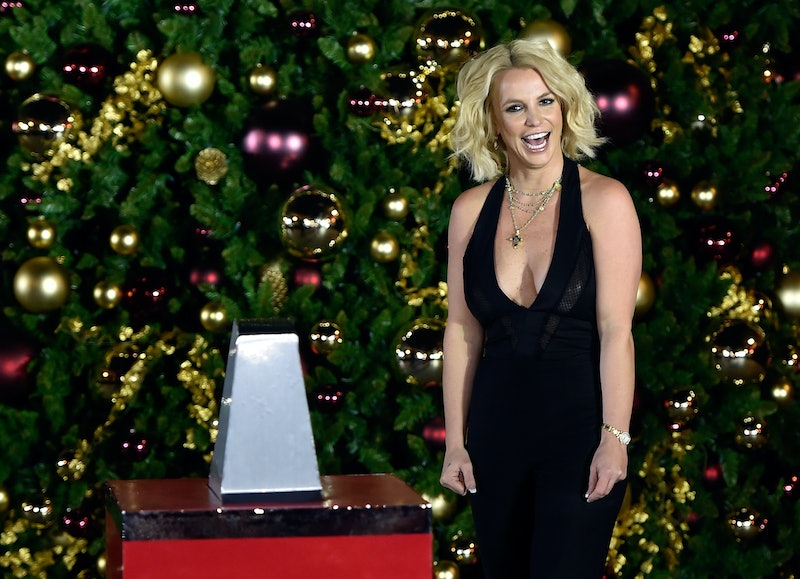 Who else has been on the edge of their seat ever since the queen of the Las Vegas Strip's longtime manager spilled a most thrilling tidbit of information on The Kats Report Podcast last week? I am referring to, but of course, the moment when Larry Rudolph told John Katsilometes that Britney Spears's ninth album is "about 80 percent done." UGH WE'RE SO CLOSE TO HEARING THE NEW GODNEY ALBUM. Just how close are we, exactly? Rather than twiddle my thumbs until Brit Brit makes an official announcement, I decided to try to figure out the answer on my own: I attempted to create a formula that will calculate when the "Piece of Me" singer will release her next batch of recordings.

Bear in mind, math is not my thing. And no, I don’t mean that in a humble, I’m-actually-really-awesome-at-math-but-I-don’t-want-to-brag way. I mean that in a thinking-about-parabolas-and-PEMDAS-figuring-out-the-area-of-a-U-shaped-3D-shape-makes-me-break-into-a-nervous-sweat way. So why would I try to create a formula when math and I do not get along? Because I am desperate to find out when Godney will unleash her next collection of tunes on the planet. And desperate times call for desperate measures. And measurement is something I learned in math class.

What numbers do we have to work with?

That did not seem like enough numbers for a good formula, so I combed through Spears’s social media accounts for more hints/numbers.

I am way out of my element here, so I thought I should do some research before I took another step:

Ready to see what I came up with? Buckle up, because I'm about to deliver some math magic:

Now how exactly did I come up with this particular formula? Tsk tsk. A math magician never shares her secrets.

If I learned anything in my pre-calculus class, it is that you have to show your work or else your teacher will slice your overall test score in half. So here's what I did:

Oh, crud. I solved for "x," but I never established what "x" means. Is the album going to drop in 2.666672 years? Months? Weeks? Days? Lunar phases? Leap days? What does it— WAIT JUST A DARN SECOND. Look at what Spears posted on the ol’ ‘gram:

What if this is like a math version of Where’s Waldo? What if the formula I’m looking for is in there? What if the Britney album release date is buried somewhere in this image? Looks like I'm going to need some batteries for my TI-83, because it's going to be a long night.